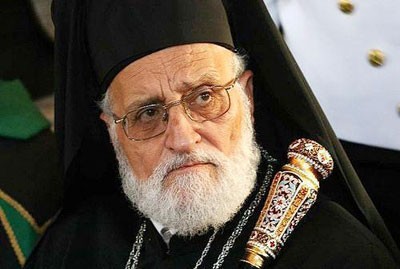 Patriarch of Antioch and All the East for the Melkite Greek Catholic Church, Gregory III Laham, stressed that terrorism the region is facing does not differentiate between Moslems or Christians, as it aims at dismembering it and undermining its national unity.

In an interview with the Egyptian al-Ahram Newspaper on the sidelines of his visit to Egypt for celebrating Christmas, Patriarch Laham called upon the Western countries that support terrorism in Syria, Egypt, Iraq and others to keep their hand off the Arab countries and bring them peace rather than weapons.

He called on the Western and European states to support Geneva 2 Conference despite of supporting terrorists in Syria through supplying them with weapons, expressing wishes that peace would prevail in Syria, Egypt, Lebanon, Iraq and Palestine by next year.

The Patriarch clarified that many politicians and journalists say that the steadfastness of the Syrian leadership reflects that 70 percent of the Syrian people consider it as the ‘savior’ of the country.

Laham considered what is going on in the Arab countries under the title of ‘the Arab Spring” as negative, bringing problems and challenges rather than democracy, liberty, justice or promotion of children and women rights.

He pointed out to the change of the Egyptian stance regarding the crisis in Syria, clarifying that the Syrian-Egyptian relations will be boosted and if the two countries’ efforts are concerted, the Arab world will become better.

The patriarch clarified that 30th June Revolution has corrected Egypt’s position, calling upon the West to respect the Egyptian people’s will.

Bishop of Zahle and Bekaa for Roman Catholic Church calls for peace in Syria, Lebanon

In a similar context, Bishop of Zahle and Bekaa for Roman Catholic Church, Issam Darwish, stressed that dialogue is the only way out for staving off danger in the entire region.

Bishop Darwish also prayed for peace in Syria, Lebanon and the Arab world, condemning the terrorist acts taking place in Lebanon, the most recent of which is the terrorist attack killing the former Minister Mohammad Shatah and six others.

1 thought on “Patriarch Laham called upon the Western countries that support terrorism in Syria, Egypt, Iraq and others to keep their hand off the Arab countries and bring them peace rather than weapons”