MORE PROOF OF THE CORRUPTION OF THE DOGS INVOLVEMENT IN SENDING TERRORISTS TO TURKEY.

YOU DO KNOW ERDOGAN, THIS WILL BE YOUR DOWNFALL, RIGHT?

COMPLETE IDIOT! I WILL CELEBRATE THAT DAY! 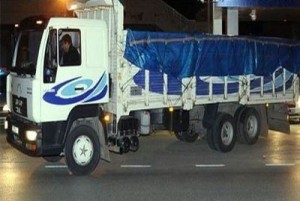 Istanbul, (SANA) – The leader of the Republican People’s Party of Turkey, Kemal Klichdar, stressed that the government of the Justice and development Party is providing weapons to al-Qaeda and Jabhat al-Nusra in Syria, considering the confiscation of the truck, which was loaded with weapons and ammunition set to be sent to the terrorists in Syria recently, has made turkey lose its legitimacy on the international arena.

Turkish Cumhuriyet newspaper reported Klichdar as saying to reporters, “Erdogan’s government is interfering in the domestic affairs of Syria, and it is providing weapons to al-Qaeda and Jabhat al-Nusra as it was revealed by jurisdiction.”

Hurriyet newspaper revealed that the security forces seized a Turkish truck loaded with large amounts of weapons on its way to Syria.

Tens of media reports pointed out that Turkish sides which are supporting the armed terrorist groups in Syria are using the pretext of humanitarian pretexts as a cover for smuggling weapons shipments to the terrorists in Syria.