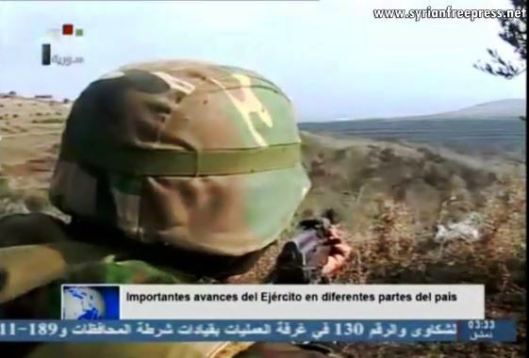 Syrian Army repels terrorists’ attacks, kills many of them in continued operations

Provinces, (SANA) – Army units on Wednesday carried out accurate operations against terrorists’ dens and gatherings, where many armed terrorist groups were eliminated and their weapons were destroyed in several areas nationwide.

Terrorist attack claims the life of one citizen, injures 8 others in Idleb

A military source told SANA that terrorist attack claimed the life of a woman and injured 8 others in Idleb province.

The source said that terrorists fired 3 mortar shells landed in a public park near al-Rawda Mosque, near  the Second Faculty of Law and Hanano Square in Idleb city, causing material adamage in the site.

Units of the armed forces carried out operations against terrorists’ dens and gatherings in Damascus Countryside, killing and injuring scores of them, in addition to destroying their equipment.

A source told SANA that an army unit killed and injured all members of an armed terrorist group in al-Qaboun neighborhood, while another army unit destroyed a terrorists’ den in Alyaa farms in Douma area.

The source added that the army units clashed with terrorists in Adra al-Balad area and killed a number of them, while other army units targeted terrorists’ gatherings in Adra city and Zebdeen town, inflicting heavy losses upon them.

The source pointed out that the army units killed a number of terrorists in Yalda and Babila towns and discovered a tunnel at the north entrance of Yarmouk Camp which was used for moving and storing weapons.

Meanwhile, an army unit repelled terrorists’ attempt to sneak from Khan al-Sheeh farms to the military checkpoints in Drousha, killing and injuring scores of them, in addition to destroying two cars equipped with heavy machineguns.

Another army unit discovered a advanced communication-sets and ammunition  to the west of al-ayyda Sukaina Shrine in Darayaa city.

A military source said that Units of the armed forces destroyed a terrorists’ rocket launcher and a warehouse full of weapons and ammunition, in addition to killing large number of terrorists in northern countryside of Lattakia, most of them were non-Syrians.

the source added that other army units killed and injured scores of terrorists in the villages of al-Rawda, al-Kbeir and Marej Khukha, inflicting heavy losses upon them.

Army units eliminated armed terrorist groups in the neighborhoods of Juret al-Shayyah, al-Qarabis, Bab Hood and al-Qussour in Homs city and the villages of al-Khalediyeh and al-Ghassibiyeh in the countryside, a military source told SANA.

The source added that terrorist groups’ attempts of attacking the residents of al-Hasawiyeh near al-Dar al-Kabira and Abu al-Alaya villages in the eastern countryside of the province were thwarted, as many of the terrorists were killed and others wounded.

Also, an army unit clashed with terrorists who attempted to attack a military checkpoint near Talbisa town, killing many of them.

The source said that terrorists’ gatherings were destroyed with all weapons and ammunition inside in al-Sheikh Ibrahim al-Hakim Farms and near al-Mahmoud Mosque in the countryside of al-Rastan city in the central province.

A military source told SANA that the army also targeted terrorists’ hideouts in the areas of Ma’rasat al-Khan, Tal Qarah, Ma’arat al-Irteeq, Nasrallah and Kifr Da’el in Aleppo countryside and killed and injured dozens of terrorists.

A military source said that the army units targeted and destroyed several Jabhet al-Nusra hideouts in the area of Zoor al-Haysa in Hama northern countryside and obliterated their weaponry and munitions.

The source added that the competent authorities, in cooperation with the families, nave been able to seize a den for terrorists at al-Sakhana neighborhood in Hama, arresting a big number of the terrorists.

It affirmed that that the army found different weapons, rifles and RPGs inside the den.

The army units clashed with terrorists in the area of Daraa al-Balad and killed and iinjured scores of them, among them was Jaafar Saleh al-Mahameed, leader of the so-called “Liwaa Tawheed al-Janoub”.