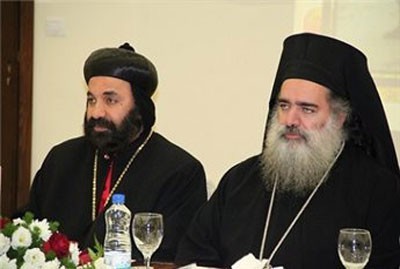 11/01/2014 – SANA/Milhem/Ghossoun – Participants of Theology and the Local Church Conference in the occupied Palestinian territories expressed solidarity with the abducted archbishops and nuns  by the armed terrorist groups in Syria, stressing the adherence of the Christians of the east to their Arab identity and rejection of isolationism, being original part and parcel in the region.

The Palestinian Ma’an News Agency said during the opening session of the Conference kicked off in Bethlehem, the West Bank, on Saturday, that the participants stressed the importance of the meeting scheduled next May between Pope Francis’ and Patriarch of Constantinople in occupied Jerusalem.

The participants said that the historic meeting aims at highlighting the importance of the Christian’s presence in the East and the centralization of Palestine being the holy land in which Christianity set out to the whole world.

They condemned all attempts that aim at eradicating Christians from their Arab roots, stressing that the Christian-Muslim fraternity and cooperation are required in this critical stage more than any time before to foil the conspiracy that seeks to dismember the Arab Nation.