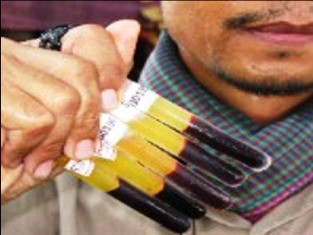 Islamists have sold the blood of Syrian Christians that they killed for $100,000 per bottle to Saudi Arabians;

this is according to the Syrian Orthodox nun, Sister Hatun Dogan, a woman of Turkish descent, as she was presenting her results from independent research.

Sister Dogan, whose family had moved to Germany when she was 15 years old, now runs a charity foundation called the “Hatun Sisters”, known as the “hand to assist the poor”, which operates in 35 countries. According to published reports from “The Examiner”, the subject of her independent research she presented at the conference in Vienna that was a part of the event labeled “The Day for Human Rights”, was “the Persecution and Mistreatment of Christians by Muslim Fundamentalists in Syria.” She introduced a man that she met who confessed to being one of those murderers and since then has become a Christian. She ended the presentation with “Syrian Christian blood is big business.”

“A small bottle of Christian blood was sent to fanatics (Wahhabis) in Saudi Arabia, where a man paid $100,00 for it”; this is according to Sister Dogan Hatun. “Under the Islamic conception, when they wash their hands with the blood of the sacrificed for Allah; they believe they will be rewarded.” During her speech presented in German, the video she displayed from YouTube depicts the victims of these encounters they had with radicalized Muslims. Many of the victims reported cases of rape, murder, torture, and mutilation. The nun stated that a Syrian, remained in contact with, stated that they would cut out some of the mutilated parts and replace them with meat and salt.

The nun also presented and described numerous cases of violation of Syrian women with whom she corresponded with. She spoke to 218 women who were abducted, raped, and later released in exchange for ransom. Sister Dogan stated that she has 174 videos available for viewing that can attest to these terrible abuses, torture, and murder she received from the victims families. During the conference, one of the victims was in attendance for the “Memorial Ceremony of the Dead” for a Christian man named Joseph Baghdad, who was killed by Jihadists. She displayed the pictures of his mutilated head to the audience that his sister sent her.