In my humble opinion, the United States government, who does NOT represent the people of America anymore, but the banksters of wall street and the elite Bildeburger 1%, has lost 110% of their credibility and the ability to even run their own country anymore. While the US calls for the president of Syria, Dr Bashar al-Assad to step down they forget about all the shit piling up against their own door.

Lets face it. The United States government working with their shadow government in the CIA blew up the twin towers in New York September 11, 2001 after TRILLIONS of tax dollars were stolen. A plan hatched years ago, spoke at great lengths by General Wesley Clark of the United States Army to invade the Middle East to steak their wealth of resources needed to fund perpetual wars. The United States routinely murders her own citizens under covert operations to stage false flags. Syria was only one in 7 countries set to be destroyed and taken over. Its all documented by experts. Its no longer a conspiracy theory, its a cold hard fact.

The United States, under President Regan created a group of Mujahadeen fighters along side Saudi with their extreme Wahhabi beliefs because the US knows that to conquer the Middle East and steal all the wealth, they have to “divide and conquer.” Its the American way. What the uneducated ignorant leaders learn the hard way in the Middle Eastern world is that eventually, their country will also be dived, and conquered as well. History merely repeats itself, and it seems that these leaders are more interested in gaining monetary funds and fake assurances than they are in looking at what is best for their own people. The United States doesnt give 2 shits about their own people, so why would they give a shit about others.

The people of the United States better wake up and realize that FEMA camps all over the United States, are fully stocked and ready to go for a reason. Religion has been stripped from as many public forums as possible making the American afraid to even wish each other Merry Christmas like they have since the dawn of their time. Sexual orientation in the front lines as families disintegrate daily. Sexual shows with nudity, excessive sports, celebrity bullshit plastered all over their televisions to keep the masses preoccupied so they dont pay attention to what is happening behind their backs while the United States not only destroys other countries, but also destroys their own. Reportedly, the US wants to rid 90% of their own population by the year 2029. The constitution is being torn to shreds in front of their eyes, gun laws, police brutality and murder… Where are the protesters?

They are funding and pushing poisonous genetically modified food down the populations throat while claiming its fine. There are reasons many countries ban them. What happens to the real food, and flowers when the bee population is killed off? Adding fluoride to the water to dummy down the population which by the way is working as the the average IQ in America is down to 98.4, while charging for the fluoride on their water bill. Forcing vaccines that have toxins in them, meat full of antibiotics and God knows what. Milk isnt even safe anymore! Theirs is an agenda of madness.

The US government employs Israeli citizens and Muslim Brotherhood that surely dont think of the good of the US citizen. Knowing this, how in the world could the American people take any comfort that they have Americans best interest at heart? Or do they even know this? The Muslim Brotherhood works directly with Israel in sowing discord around the Middle East, and many of the faithful Muslims are throwing the words of the Holy Qur’an right out the window and falling right into the hands of the Zionist entities that would and are destroying them in a second. Knowing clerics can be bought and paid for, just like world leaders, politicians, and anyone else. They are man. Do not fall for the plan of the devil! He always has an agenda. The US attacked Iraq for oil, Afghanistan for their opium which they now control, and Libya for their gold. The US wants their military bases, paid by tax dollars, to try to control the entire world so they bend to that 1%.

As far as Syria goes, how many really believe the lies of the United States anymore, besides the Muslim Brotherhood residing in America anyway? Theres a reason Egypt has brought charges against the US President Barack Obama, and Hilary Clinton. He, being a member of the Muslim Brotherhood as is his brother, and she being a member of the Muslim Sisterhood. Does everyone not see the writing on the wall? The US paid for United Nations Ban ki-Moon invites Iran to the peace talks regarding Syria. Being as though this is assumed to be a legitimate aim to bringing peace to the region where the US supported terrorists are responsible for thousands upon thousands of innocent civilian deaths in Syria. That would be assumed, but since we are dealing with a very corrupt United States who merely wants to destroy yet another country we must look at the reason why the Syrian National Coalition (another name for US Puppet Government for Syria) refused to attend talks if Iran attends. Russia would have an ally, and the US wants Russia to stand alone as the US calls for the removal of Assad, and Russia calls for the end of the bloodshed of innocent Syrians.

Looking at the role the US has played thus far in this conflict, it is nothing short of despicable behavior on the part of the US. Knowing the US Main Stream Media is bought and paid for and reports news exactly as the US government wishes, then it is not to be trusted. US politicians are playing golf and having lunches with the journalists who are suppose to hold them accountable but now they are all related, literally. No one holds politicians accountable any longer. If the do, they are removed from their position, as in the case of former award winning CNN journalist Amber Lyons who tried to report the horrors of Bahrain and lost her job. The US does not want the truth told to the Americans because some of them who are not in a pharmacy induced coma may just rise up against them. The Americans have no clue how to protest compared to countries who have to protest.

Sniper being directed where to shoot into protesters 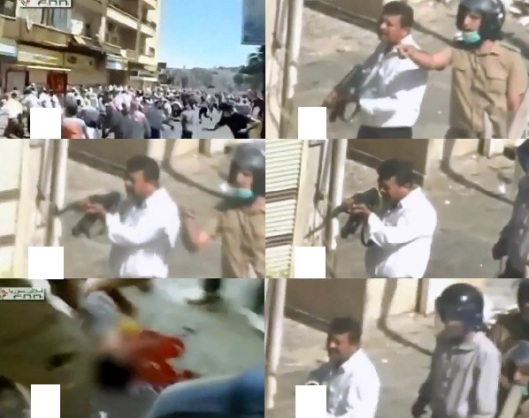 So, from beginning to end, how did it really happen in Syria? The media was set in place first and foremost. The now known liars called Al-Jazeera (by their own admission) were set and ready to report their fake reports along with the lying CNN who broadcast fake news to draw in the American people as well as the west in a very manipulative way. So, now the stage was set. The paid protesters who protested for a Syria that was already more “free and democratic” than any other Middle Eastern Country took to the streets for “freedom and democracy”as the US wanted them to to promote the fake “Arab Spring.” Snipers were strategically placed around to shoot some of the protesters to bring in the media attention. Massacres began to happen before UN meetings to try and force a NATO invasion. The US tried to pull out all the ropes with their hired thugs. Thanks to Russia, it didnt work. So the US began to arm their hired thugs, even running weapons seized from Libya to Syria through ambassador Christopher Stevens. The US worked hard to sell the notion that the Syrian Army was killing protesters as well as her own citizens but the fact of the matter was the army never got involved in the conflict until over 100 police officers were killed by “peaceful” protesters. Since the police were being targeted, the military had to intervene. Whoever says the Syria conflict began with “peaceful protests” was not there, and flat out lying because they are paid to.

Another fact is, although there were these paid murderous protesters, millions of Syrians took to the streets in support of their President, as millions upon millions still support him today. He is their President, and the US would do good to remember that fact. Syrians will decide their own fate, they do not need the US government, or the US invented Syrian National Coalition to do it for them. The US kept funding and aiding terrorists with weapons hoping this fake Muslim army would have the ability to over take the government, but when the Syrian troops began to gain more and more ground, the US had to think up a false flag attack hoping for an OK’d NATO invasion. They are good at these as they are used to successes of them in the US, and Americans are complacent to believe what they are told. Then came the chemical weapons attack in August of 2013. Doctors without borders reported that under 400 died from these garage made weapons Saudi brought in via Turkeys borders. You see, most of us are not so stupid as to believe that while the UN happens to be there investigating a previous chemical weapons attack, President Assad would launch one. Give me a break!

The US is done in the Middle East. They have no legitimate reason to be there at all. Research everything youre told and never take a mere report as your facts. Thanks to youtube, nearly everything can be researched. Hold those accountable who should be held accountable. Under George Bush, the US used internationally banned chemical weapons in Iraq causing record numbers of deaths and deformations on their children as well as deaths among US soldiers. Just like Israel used internationally banned while phosphorus in Gaza during operation cast lead. Why are these leaders able to get away with this crap? Why are they not in the international criminal courts for war crimes and crimes against humanity?

Iran is a very important part of the Middle East, and an upcoming superpower. They have every right to be at the Geneva 2 conference, and should be there. But the bitch fit throwing of the United States and their puppet group of minions called the SNC might be made to look as stupid and illegitimate as they really are, so the UN UNinvites Iran after their invite? REALLY? Proof of a corrupt and paid for United Nations, and conspiracy against Syria, which we all watch closely for legitimacy daily!

When will the REAL international community and real world leaders put their foot down and say enough is enough? Some of us are waiting, but not patiently. We look to you like we look toward the journalist who isnt afraid to print the truth, or the politician whose moral character is more important than the paid bribe. The people of the world have the right to know whats going on. Its time these assholes who should be held accountable, are. Dont let us down…

No wonder American citizens are leaving the US to live abroad somewhere. Its probably safer for them anyway. Gone is the United States who used to support the citizens of America. I can understand the need to feel free from a country that is, or stands for anything but “FREEDOM.”

for SyrianFreePress.net Freelancers Network on January 21, 2014