SANA/Mazen – 24/January/2014 – Presidential political and media advisor Dr. Buthaina Shaaban, Deputy Chairman of Syria’s official delegation taking part in Geneva 2 conference said on Friday that no force on land would be able to touch a little bit of Syria’s soil or target the dignity of any Syrian citizen.

Dr. Shaaban added in a statement to journalists in Geneva “We came to Geneva for the sake of our country, people and to stop terrorism, bloodshed through a political track that would be determined by the Syrians themselves , and we will not retreat”, clarifying that “because we believe that our army and people are the only ones who determine… and we represent them and the decision wouldn’t not be except for Syria and the Syrians ,”

She pointed out that “what is confirmed till today is that the coalition called /opposition/ has no issue of a homeland or people.

Shaaban said that the coalition delegation called “opposition” returned to the orchestra which markets baseless things, adding “it seems that their goal, or they imagine along with their masters, that we came to Geneva to let them assume authority, and this is an illusion that should go out of their minds.”

“The Syrian people pay the price of the crisis in Syria from their blood and families… the so-called coalition doesn’t represent the opposition in Syria as there are other  spectrums inside Syria of the national opposition which is committed to their home,” Shaaban added.

She pointed out that Syria’s official delegation is interested in meeting all those who want to build Syria, saying that it came to Geneva and is positive, and believes in what it says.

Shaaban affirmed that what is being uncovered day after day, and it is considered as one of the biggest reasons of the crisis in Syria. is “the real intervention which, even if it’s not public, is done through tools of foreign sides.”

She clarified that Syria’s official delegation will meet UN Envoy to Syria Lakhdar Brahimi who will later meet the other side, adding “ we are waiting for what will happen,” considering that the coalition delegation depends on one point; mainly media through which it markets what it wants.

Shaaban pointed out that Syria’s official delegation was informed yesterday that the first meeting will be with Brahimi and with each side alone, and that the other side is not ready yet.

She expressed belief that the aforementioned side “hasn’t been ready for three years to be committed to Syria or its people and nobody knows what orders they receive.” 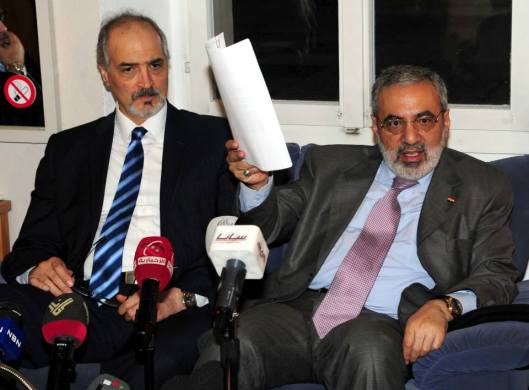 Montruex, SANA/ English Bulletin  – Information Minister Omran al-Zoubi stressed that the presence of the Syrian delegation at Geneva 2 conference is based on the higher national interests of the Syrian people represented in stopping the bloodshed of the Syrians, repelling the foreign terrorists and protecting the national sovereignty.

” Combating terrorism is the main access for any political solution and any political step or political development would be meaningless under terrorism, al- Zoubi added in a joint press conference with Syria’s Permanent Representative to the UN Bashar al-Jaafari on Tuesday in Montruex.

He said that the point of seriousness of the conference is the agreement of the delegation of the so-called the opposition coalition to participate in combating terrorism.

The Minister asserted that fighting terrorism on the ground continues and has no relation to the political track.

He pointed out that the delegation of the so-called the opposition coalition doesn’t represent all the Syrian opposition inside and outside Syria, but they only represent themselves, asserting that we will engaged in the debates and we have evidences and documents on the involvement of the opposition in supporting, funding terrorism in Syria.

” The Syrian delegation will not withdraw, we have nothing to be afraid of because we have a national project based on national unity, protecting the national sovereignty and stopping the bloodshed,” he said.

” On withdrawing Iran’s invitation to participate in Geneva 2 Conference, al-Zoubi underlined that Iran’s presence or absence will not change its weigh or influence in the region.

Answering a question on the political track for solving the crisis, the Minister said that the logical entrance for this track is through accord that Syria is facing a systematic international terrorism, with countries contradicting UN Security Council resolutions related to counterterrorism and instigating terrorism, particularly Resolution No. 1373 .

“These countries fund, weaponize, and train terrorists, as they provide intelligence and logistic support…these countries should be responsible before the UNSC and its resolutions.” The Minister added.

Al-Zoubi described the European role as “worthless and nonsense”, pointing out that if France thinks or claims that it leads a positive role or it has an active influence, it is a mistaken.

On the participation of the coalition delegation and the preceding discord among its members regarding coming or not, the Minister said “It is a propaganda for making their participation looks like a big achievement,” pointing out that the name list of coalition members participating was set beforehand.

Al-Zoubi pointed out that the former U.S. Ambassador to Syria, Robert Ford, who was officially informed through a memorandum issued by the Foreign Ministry that he is persona non grata in Syria, was supervising the arrangement of the opposition delegation and the names set beforehand.

He added ” All what has been circulated last week regarding communications and propagandas was done only to show that he was brought under pressure, promises and guarantees with the aim of designing the role and the image on their representation and role.

“There is a conflict between two projects in the region” the Minister said, clarifying that the first project is represented through aggression on residents and the indigenous people of the region, its resources and sovereignty and the other project which wants to preserve the region, its sovereignty, history and heritage.”