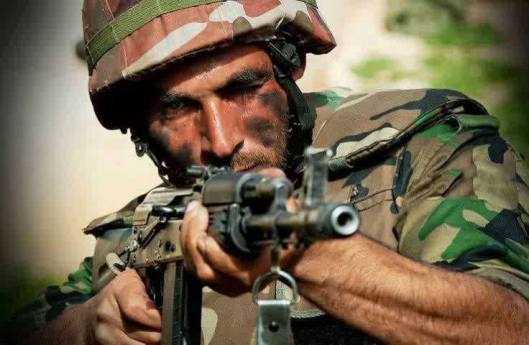 Army units on Thursday carried out large-scale military operations, targeting terrorists’ dens and gatherings in several areas around the country.

14 citizens were injured by terrorist mortar attacks on residential neighborhoods in Damascus, Aleppo, Homs and Daraa.

A source told SANA that 4 mortar shells fired by terrorists landed on al-Hamra and al-Maydan neighborhoods in Homs, causing the injury of 6 citizens and material damage to 5 cars.

The source added that other 2 citizens were injured by shells landed on al-Kalidiyeh neighborhood in Aleppo city.

The source added that armed terrorist groups fired mortar shells on neighborhoods in al-Harra city in Daraa, causing the injury of the Chairman of communication  center and another employees.

In Damascus,  4 citizens were wounded by a shell fell on al-Ghawas street in al-Maydan neighborhood.

A military source told SANA that the army units carried out operations against terrorists’ dens and gatherings in Atman, Enkhil and al-Sheikh Maskeen towns, killing and injuring scores  terrorists, some of them affiliated to the so-called “Mujahdi Houran Brigade.”

A source told SANA that the army units killed many terrorists near Saraqib and Sermen towns in Idleb countryside, in addition to destroying their weapons and ammunition.

Among the dead terrorists were Mohammad Hamad and Mustaf al-Hajj Hassan.

A military source told SANA on Thursday that units of the armed forces eliminated the last gatherings of the terrorists in Telal al-Abboudiyeh and Berghlan al-Gharbiyeh and al-Sharqiyeh in Qseir countryside in Homs.

The source added that dozens of explosive devices which were planted by terrorists in the region were dismantled and terrorists were eliminated.

Terrorists, including Saudis and Tunisian, killed in Deir-Ezzor

Army units killed dozens of terrorists in Deir-Ezzor, some of whom are Saudis and Tunisians, and destroyed a tunnel they were using for transporting and transferring weapons and ammunition.

A source told SANA that an army unit clashed with Jabhat-al-Nusra affiliated terrorists in al-Erfi neighborhood, killing a big number of them, the majority of whom are Saudis and Tunisians.

Another unit eliminated an armed terrorist group including a sniper near Bemo Bank branch in al-Reshdia neighborhood in the city of Deir-Ezzor.

The source added that a 19-meter tunnel in al-Bousaraya street was destroyed with all terrorists and weapons inside.

A mortar launcher and a terrorists’ den were destroyed in al-Moreiyeh village, where many terrorists were killed including the terrorist Abdul-karim al-Jassem al-Nahar.

Army eliminates a number of terrorists in Aleppo countryside

The source added that an armed terrorist group was eliminated near the water station in Sulieman al-Halabi area. Other army units destroyed terrorists’ gatherings and hideouts with all the weapons and ammunition inside them in the villages of Maarat al-Artiq, Hilan, Haritan, al-Sheikh Lutfi, the industrial city, Rasem al-Abboud, al-Sheikh Najjar, Andan,Ebtin, Hadadin and surrounding Aleppo central prison.

In Idleb, army units eliminated a number of terrorists in the villages of Tal Salmo, Um Jern in Abu al-Dohour, KaferTala and the youth camp.

A 23mm anti-aircraft machinegun was destroyed, and a number of terrorists were killed and wounded surrounding al-Yarmouk School, the old customs, the shoes factory in Daraa al-Balad.

A unit of the armed forces eliminated an armed terrorist group in Maaloula town in Damascus Countryside.