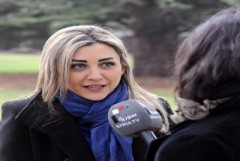 Who rejects statements based on UNSC resolutions on combating terrorism is a terrorist.

In a statement to reporters, al-Shibl pointed out that the draft statement is clear and based on the UNSC resolutions as it calls for serious and immediate work to combat terrorism and pursue the terrorist organizations in all Syrian territories.

She added that most items of Geneva 1 Communique talks about combating terrorism directly or indirectly and for achieving all items there should be a stable and secure situation on the ground; consequently stopping terrorism is a must.

Al-Shibl said that the official delegation tried to establish common ground in a simplified way and talked about a sovereign state and combating terrorism and liberating territories, but the other side rejected these very simple principles.

Answering a question on “essential talks” going on in Berne with the participation of Iran, al-Shibl denied such talks are taking place, stressing that the Syrian official delegation is in Geneva, and there are no other delegation elsewhere.