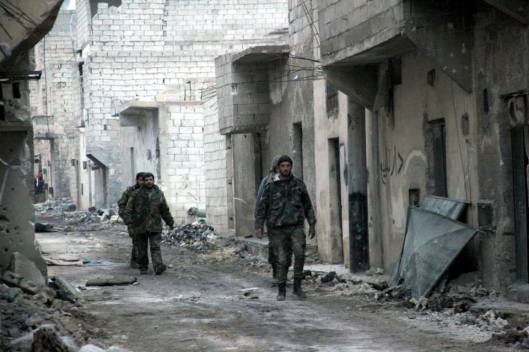 Army units on Saturday carried out several successful operations against the armed terrorist groups in several areas, killing and wounding scores of terrorists and destroying their weapons and ammunition.

Units of the armed forces regained complete control over the area surrounding al-Tim oil well, eliminating terrorists’ hideouts and gatherings in the groves of al-Mari’aeh village in Deir Ezzor countryside.

A source told SANA that units of the armed forces clashed with terrorists in the surrounding al-Tim oil well, asserting that the clashes resulted in regaining complete control over the well after eliminating the terrorists’ last hideouts and gatherings, and destroying their weapons, vehicles and ammunition.

The source added that an army unit destroyed terrorists’ hideouts and two cars equipped with a mortar and an anti-aircraft machineguns in the groves of al- Mari’ayeh village, killing scores of terrorists, among them Mohammad Matar al-Rawi and Hamad Abdel-Fattah al-Hussein al-Jalil.

The army units eliminated the majority of terrorist groups’ members affiliated to the so-called “Islamic Front” near Adra Workers city, among them was Hassan al-Mulla, leader of a terrorist group.

Dozens of terrorists, among them a sniper, were killed in the areas of Alya farms, Joubar, Daraya, Khan al-Sheeh, Yabroud, Ras al-Ein and Harast.

In the area of al-Qadam, the army pursued terrorists after eliminating all terrorist groups on Damascus-Sahnaya highway and the New Kiswa road.

Meanwhile, 6 persons from the area of Wadi Barada have turned themselves in along with their weapons to the authorities and released them after pledging not to take part in any act that undermines the homeland’s security.

A military source told SANA that terrorist groups’ hideouts were destroyed in the surrounding Aleppo central prison, near Rasem al-Abboud village and Hilan, with all the weapons and ammunition inside them.

The source added that army units killed and wounded a number of terrorists in the villages of azan, Hadadin, al-Wdaihi, Erbid, al-Jadideh, Kwairis and Shiekh Najjar, destroying cars loaded with weapons and ammunition.

In Aleppo city, army unit destroyed terrorists hideout of the so-called the religious courts in al-Mashhad neighborhood, killing all terrorists inside it.

Units of the Syrian Arab Army confronted a terrorist attempt to attack military points and bombarded several of their dens in Daraa and its countryside.

A military source told SANA reporter that units of the army clashed with terrorists who tried to attack military points in Shaqra and Izra towns and killed and injured tens of them.

The source added that terrorist dens and gatherings were razed to the ground in al-Nazihin Camp in Daraa al-Balad and tens of terrorists were killed.

The competent authorities in Homs foiled an attempt by an armed terrorist group to enter a truck loaded with weapons and ammunition from the Jordanian territories into Syria.

A source told SANA reporter  that the car was destroyed in a tight ambush along with the weapons, ammunition and terrorists inside it.

The army targeted and destroyed a number of terrorists’ hideouts and gatherings in the town of Binnish in Idleb countryside, killing scores of terrorists and destroying vehicles equipped with heavy machineguns.

7 citizens killed by terrorists in Talkalakh countryside, 9 injured in Damascus

An armed terrorist group infiltrated from Lebanon and committed massacre against citizens of al-Ghayta village in Talkalakh countryside, claiming the lives of 7 innocents.

A source told SANA that scores of terrorists sneaked from Khurbet al-Roman in Lebanon to al-Ghayta village and opened fire on the citizens, claiming the lives of 7 citizens.

It added that an army unit clashed with the terrorists, killing and injuring scores of them, while the others escaped to Lebanese lands.

One of the survivals, Omran Sawfan, said that a group of hooded gunmen dressed in black took him to a room in a farm where he saw his father, brother and a number of civilians who were killed by the terrorists.

Akhras was shot in his side and a number of civilians were dead before the army and some of the locals were able to hospitalize them.

A takfiri terrorist group targeted the Grand Umayyad Mosque in Damascus with a mortar shell, causing the injury of 9 citizens and material damage.

A source at the Police Command told SANA that a mortar shell fell near the external wall of the Grand Umayyad Mosque from the northern side causing the injury of 9 citizens, including a  child and a woman, in addition to material damage.

The source added that two other mortar shells launched by terrorists fell in the surrounding of al-Abbasien Stadium and caused material damage, but no human causalities were reported.