RANA KABBANI – Employee of The Guardian 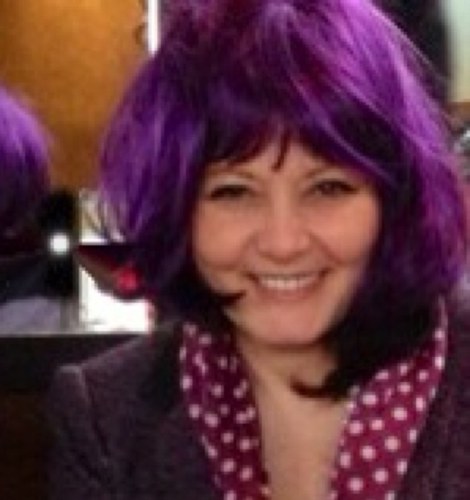 There used to be a day when papers had some credibility as the writers took pride in bringing truth to the masses. This is how a reputation was built, or destroyed. This is how one paper would rise above others. Stories were checked, and checked again for credible sources containing facts. This is no longer the case with many many papers, or online papers, etc. It has become a popularity contest in a media war. Fuck the facts!

Rana Kabbani has the rantings of a woman scorned as if she was the mistress of Syria who never got what she wanted out of the relationship.

Who is this former BBC contributor and raving lunatic paid to write for the Guardian?

Well, I cant tell you WHAT Rana Kabbani is, but I can tell you what she is NOT.

Rana Kabbani is NOT a Syrian, but rather an EX-Syrian, who has not lived in Syria for a very very long time. A supporter of the terrorist organizations in Syria (slaughtering Sunnis, Shiites, Christians, Palestinians, etc) attempting to overthrow the government of this sovereign nation. Or did we forget that.

Rana Kabbani is NOT “A responsible Journalist.” Rana Kabbani has a great deal LESS class and credibility than those she condemns. It seems the better the government troops (Syrian Arab Army that fight FOR the majority of Syrians against terrorism), the more she rants her insane one sided type of journalism. A nasty vile mouthpiece of the west. Incapable of showing any truth as her anger is a personal matter more than anything else.

Rana Kabbani is NOT the voice of Syrians, but rather the voice of the United States created opposition that is trying to implement the criminal (with a felony background), Ahmad Jarba. She was raised in the west and is based in the west. She no more supports the Muslim as she does the Syrian. Her only agenda is to spew her own style of hatred. “Truth” is something she doesnt even know the meaning of.

Recently, Rana Kabbani has stooped to an all time low with a “tweet” calling for the President of Syria, Bashar al-Assad’s children to be raped.

Some of those who have commented (tweeted back) to her have more common sense than she does. 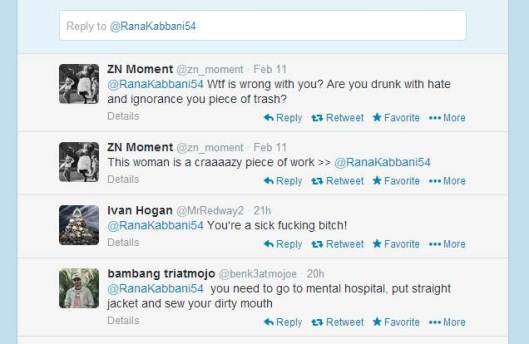 Is Rana Kabbani the voice for the Guardian?

It appears so, but then her comments are a DIRECT reflection on the Guardian itself. If the Guardian supports these types of despicable remarks from one of their own, without firing her OUTRIGHT from her current position, than the Guardian is equally as despicable and responsible for HATE SPEECH!”. After all, “you are known for the company you keep,” or in this case PAY a salary to!

The Guardian needs to issue an apology from this vile female “hater” that calls for the rape of children, no matter to whom the children come. If they do NOT, then these comments might as well have come from the Guardian itself. Where is Human Rights or UNICEF condemnation of this type of HATE SPEECH towards children?

4 thoughts on “Angry Prejudicial Rana Kabbani – Paid “Raving Lunatic” of the Guardian – Where is Apology?”