New footage posted online suggests that British citizens fighting in Syria have been involved in acts of execution and torture.

The footage obtained by the Sky News on Monday, shows British members of the al-Qaeda-linked al-Nusra Front torturing and beating their fellow militants.

The video, which first appeared on social media websites, is believed to have been shot in a militant-held area in northwestern Syria.

The material is also found to be uploaded onto the accounts of two men from London who are currently fighting as militants in Syria.

The London-based International Centre for the Study of Radicalization (ICSR) said the footage serves as a further sign of a worrisome trend, proving that British militants have engaged in serious acts of violence in the Arab country.

The ICSR released a report three months ago, indicating that between 3,300 and 11,000 militants from over 70 countries have been fighting against the Syrian government from late 2011 to December 10, 2013. It also estimated that some eighty percent of the foreign militants are Arabs and Europeans, mostly from France and Britain.

Moreover, UK intelligence sources told the Daily Telegraph  in December last year that from among the 1,000 Westerners fighting against the government of Syrian President Bashar al-Assad over 300 are British nationals.

Syria has been gripped by deadly crisis since 2011.
According to reports, the Western powers and their regional allies — especially Qatar, Saudi Arabia, and Turkey — are supporting the militants operating inside the Arab country. 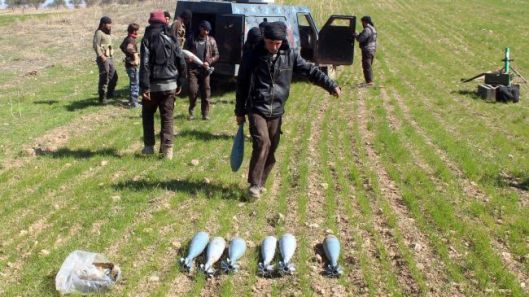 Citing Western and Arab diplomats as well as foreign-backed Syrian opposition sources, the Wall Street Journal said on Saturday that the weapons include anti-aircraft shoulder-fired missiles.

“Saudi Arabia has offered to give the opposition for the first time Chinese man-portable air defense systems, or Manpads, and antitank guided missiles from Russia,” the journal said.

A Western diplomat with knowledge of the weapons deliveries told the journal that “new stuff is arriving imminently.”

Saudi Arabia has been the main supplier of weapons and funds to foreign-backed militants inside Syria.

The United States is also said to have stepped up its financial support for the militants.

Militant commanders say Washington has handed them millions of dollars in new aid.

The detainees are said to have entered Syria to carry out terrorist attacks.

French daily Le Figaro recently said that the weapons used by the militants in Syria are initially purchased by Saudi Arabia from black markets in Ukraine and Bulgaria.

The weapons, which include Israeli missiles, are then transferred to a number of cells on the outskirts of the Syrian capital, Damascus, Le Figaro added in its report.