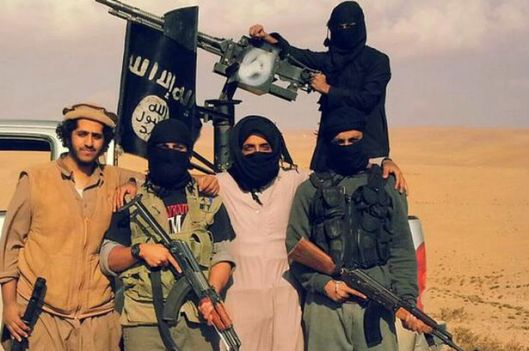 Around 250 British jihadists have returned to the UK after training and fighting in Syria, a senior Whitehall security official told the Sunday Times. Security services are monitoring the “extremist tourists”, fearing they might carry out attacks at home.

Ministers have been informed that more than 400 Britons went to Syria to engage in militant activities, and “Well over half of those who traveled out have come back,” the official told the Times.

“For some, their jihad is done, others will help others travel to Syria, while others will raise funds for fighting,” the Whitehall source said.

The security services are said to be closely monitoring the 250 returnees, who include several veteran hardliners who have fought in Afghanistan or Pakistan. Many others have participated in combat or received training in munitions or other skills applicable to terror operations, with some exhibiting a willingness to carry out attacks in the UK, security officials cited in the report said.

“There are a few hundred people going out there. They may be injured or killed, but our biggest worry is when they return they are radicalized, they may be militarized, they may have a network of people that train them to use weapons,” London police chief Sir Bernard Hogan-Howe told the paper.

When RT contacted the British Home Office, it responded with a pre-prepared statement from Immigration and Security Minister James Brokenshire.

In the statement, Brokenshire said there “up to 200 UK nationals” fighting in Syria “who may come in to contact with extremist groups that aspire to attack Western countries.”

He did not comment on Sunday’s report, however, only saying that the British government “is determined to detect, disrupt and where possible prosecute all terrorist threats, whether international or home-grown.”

“We know there is a risk of individuals returning to the UK after being radicalized, but they should be in no doubt that the police and intelligence agencies are working to identify and disrupt potential threats and protect national security. The police have the power to examine and detain individuals at the UK border to investigate any concerns of terrorism involvement.”

It is reported that many of the militants arrive in Syria via Turkey after joining one of the several British-organized aid caravans outwardly bringing humanitarian relief to Syrian refugees. The report says that once in the country, the UK jihadists may also be given special instructions on how to carry attacks back home. The report also warns that some of the UK citizens might even be training extremists from multiple countries about conditions in Britain.

Reports of the returnees come after the details regarding the first suicide attack carried out by a British national in Syria were made available.

Abdul Waheed Majeed is believed to have driven an explosives-laden truck into a jail in Aleppo earlier this month, joining the 20 British citizens to have died fighting in the Syrian civil war.

Political commentator Mohammed Ansar told RT Majeed’s attack presented a real difficulty to security officials, as he “does not fit the profile of a young British jihadi who has gone to Syria to fight.”

“One of the most worrying aspects we’ve seen of late is that people who are out in Syria, fighters from Britain, have been calling others to come and join them, whether they are British Muslim women, to support them,” he said.

“And they are setting themselves up as being effectively warlords who are out there, who are gun touting, and are really no benefit and no blessing to the people, and are going to become increasingly radicalized, and often go out there with a martyrdom mentality and often talk of not returning to this country.”

MI5 director-general Andrew Parker told parliament last year that the Syrian conflict has become a magnet for British nationals looking to engage in jihad, many of whom come into contact with Al-Qaeda-linked groups.

MI5 and police reportedly thwarted an alleged terrorist plot by extremist tourists operating on British soil last autumn. The terror cell was allegedly playing a mass shooting and bombing similar to the 2008 Mumbai 2008 attack, which resulted in 168 deaths and over 300 wounded.

Overall, around 2,000 European citizens are currently believed to be fighting in Syria. In January, the Wall Street Journal reported that intelligence agents from several European countries, including the UK, Germany, France and Spain, first traveled to Damascus last summer to speak with Syrian officials on how to work together to tackle the European jihadist threat.

The agents reportedly sought to share information on at least 1,200 European jihadists who traveled to Syria to help topple the government.

A BRIT suicide bomber was led into battle by Chechen jihadists in Syria.

Footage released on Friday appears to show Crawley-born Abdul Waheed Majeed struggling to understand his fellow rebels as he prepares to record a spine-tingling “martyrdom” video.

When the British jihadi is unable to answer questions in Arabic, the interviewer turns to a second fighter for help.

He responds, translating Majeed’s shaky words from English into Russian for the benefit of fellow jihadis, believed to be from Chechnya.

The discovery comes just two months after it was revealed 15,000 Chechens from a small, remote valley in Georgia are currently fighting jihad in Syria.

The bomber’s former mentor Omar Bakri Muhammad said Waheed, who was of Pakistani origin, should be heralded as a “great hero and martyr”.

The extremists have posted their blood-chilling messages, videos and pictures on sites visited every day by millions of ordinary British teenagers.

And – posing in the Syrian desert with weapons – they openly give advice on how ­recruits can enjoy safe passage to join them in the war zone.

One shot found by our ­investigators shows captured “criminals” ready for execution with the horrific Twitter ­caption: “Can’t wait for that feeling when you just killed.”

On Facebook we found a picture of two fighters posing with a victim.

And in another on the social network site, an image of a bloody hand had numerous sick jokey comments in English about how the man in the image has just killed a “kaafir” or infidel.

These are just the pictures we can show you.

We found others far more horrific. They clearly fall foul of the sites’ rules against inciting violence but had NOT been removed.

Apart from characters in the pictures who have all been identified as British, other links to the UK are plain to see.

One post includes a picture of a biscuit tin and a gun with the words: “Time to stop eating these Harrods biscuits and head to the front.”

Another refers to the use of an Asda bag to stop sand ­getting into the empty ­magazine chamber of a Russian-made PKC machine gun.

There is even a bizarre ­picture apparently showing a Sainsbury’s truck in the war zone.

A Sainsbury’s spokesman said: “The lorry in this picture was retired from our fleet about 10 years ago but there’s no way of knowing if this is a genuine photograph.”

There is even a plea for cash, with British bank account number and sort code.

Experts fear up to a ­thousand Brits are fighting in Syria – and a further 150 are thought to have returned to our streets.

We can reveal Anil Khalil Raofi, the latest Brit to perish in Syria, used the controversial Ask.fm social media site to give fellow UK citizens advice on how to join up.

A now-deleted account of the 20-year-old student from Didsbury, Manchester, advised Britons wanting to fight in Syria to volunteer in a refugee camp on the Turkish border then check into a hotel and contact him.

A picture posted online ­purports to show how easy it is to cross into Syria from Turkey – to encourage recruits they have little to fear.

Another glorifies a trainee, now believed to have died, firing a Kalashnikov.

Raofi, who studied engineering at Liverpool University, was reported to have been shot dead in the north of Syria last week.

His home was searched last Thursday.

Known online as Abu Layth al-Khorasani, he also posted a video in which he and other Brits openly discuss becoming suicide bombers.

The conversation took place while visiting a comrade shot in mid-­December near the central-eastern city of Deir-ez-Zur.

The Brit, known as Abu Qa’qaa, was injured in a clash that resulted in the death of his co-fighter, 21-year-old Ifthekar Jaman of Southsea, Hants.

News of the death of the first British suicide bomber in Syria emerged on Twitter last week.

A hardcore group of 50 British jihadis who have been fighting in Syria have returned to the UK and are planning to attack us, MI5 fears.

Intelligence officers believe the killers – experts in explosives and weapons – are out for revenge after the Home Office vowed to crack down on “terror tourists” battling and training abroad.

Around 250 jihadis are thought to have returned, but 50 are said to be plotting another attack like 7/7.

Homegrown fanatics are going to war-torn Syria to learn deadly skills but there have been recent threats of laws banning them from fighting abroad.

A security source said: “The very laws banning their jihad travels may goad so-called reformed jihadists into violence. Having had a taste of the frontline and seeing fellow extremists become martyrs they could turn on mainland Britain.

“It is very important extremist groups are identified and monitored to make sure they do not endanger British lives.”

Anti-terror police have stepped up the monitoring of extremist mosques and border officials are tightening checks on suspects trying to return from Syria.

Arrests linked to Syria are soaring, with 16 so far this year, compared to 24 for all of 2013. Extremists can get life in jail for “acts preparatory to terrorism and assisting a person in such activities” and they can get 10 years for “training as a terrorist”.