Thousands of Syrians went out in massive rallies in various areas and cities on Thursday in manifestation of unswerving adherence to the Syrian national principles and staunch support to the Syrian Arab Army.

Thousands from Qudsayya, al-Dimas and al-Sabboura areas in Damascus countryside gathered in a massive popular rally in Qudsayya area to show support to the Syrian army operations against the armed terrorist groups and national principles.

The participants, who waved Syrian flags and held posters for President Bashar al-Assad, affirmed that ”those endowed with the spirit of Correctionism and Liberation must have a spirit of victory,” expressing confidence that Syria’s victory is imminent.

Chairman of Damascus Countryside Council, Saleh Bakro told SANA that the rally ”is a popular referendum on the basic choices and firm principles that hold the Syrians together no matter their different affiliations.”

A massive rally took place in Najha area in Damascus Countryside, with the participants expressing their rejection of any foreign interference in Syria’s affairs. 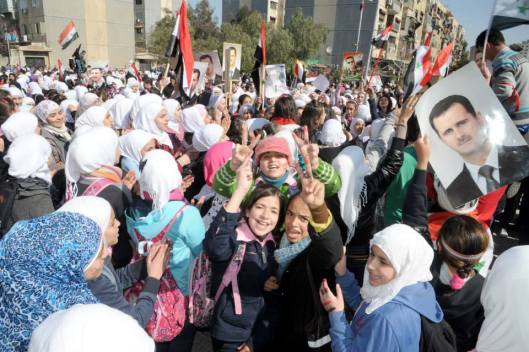 Waving the Syrian flags and posters of President Bashar al-Assad, the participants stressed that the national principles proclaimed by the delegation of the Syrian Arab Republic in Geneva express the aspirations of the Syrian people. 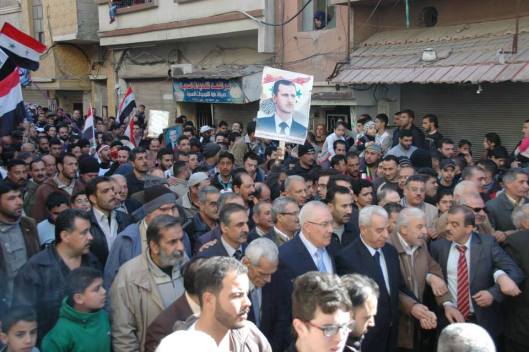 They chanted slogans reflecting firm national unity and voiced strong support to the Syrian army while it is performing its national duty of confronting terrorism to restore security and stability to the homeland.

Residents of Misyaf city and its countryside in Hama province also went out in thousands in a rally during which they held up banners that glorify martyrdom and the martyrs and the heroic achievements of the Armed Forces.

The participants affirmed that the aggression waged against Syria makes the Syrians more determined to adhere to the sovereignty, just rights and independent decision of their country.

They strongly condemned the brutal terrorist massacres committed against the Syrian people, expressing their readiness to make more sacrifices so that Syria can get out of the crisis stronger and restore its regional role.

“People of Misyaf stress through this massive gathering that they stand by the Syrian Arab Army in the face of the terrorist takfiri groups and their backers,” said Governor of Hama Ghassan Khalaf in a statement to SANA.

For his part, Misyaf Mayor Ibrahim al-Sheikh Ali said the rally reflects the Syrians’ determination and will to go on with their lives and overcome the harsh circumstances they are going through.

He added that the rally also indicates the failure of all the attempts seeking to weaken the Syrians and break up the Syrian social fabric.

Million man march in Tartous to support the army

In Tartous province, a million man march  was organized on the Cornish where the masses expressed support to the firm national principles and Syrian Army.

The participants waved national flags and banners glorifying national unity and the Syrian people’s commitment to the path of resistance, expressing pride in the feats of the Syrian army in the war against terrorists.

Tartous governor, Nizar Ismail Moussa said that the locals in Tartous wanted to echo a strident massage of support to the Syrian army and the ”honorable people who have declined to compromise their homeland.”

”The march is a manifestation of commitment to national principles and the blood of martyrs who offered their lives for Syria to remain steadfast and for the whole world to know that the Syrian people are forever united,” he added.

Residents of al-Haffeh city in Lattakia province staged a huge march in support of the national principles and the Syrian Arab Army.

The participants  raised the national flags and photos of President Bashar al-Assad and placards expressing support to the Syrian army and appreciation of its sacrifices to defend the homeland.

They expressed rejection of the sedition projects planned by some enemies of the nation, pledging to continue the march of confrontation until victory and rebuilding Syria.

They called on President Bashar al-Assad to run for a new constitutional term as he is a genuine guarantee for Syria’s unity, strength and pride. 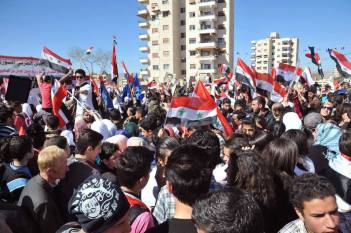 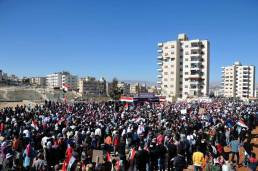 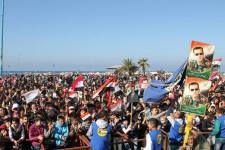