“Eventually, Russians will come for Mr. Putin in the same way and for the same reasons that Ukrainians came for Viktor F. Yanukovych,” the hawkish senator wrote in an op-ed in The New York Times on Friday. “We must prepare for that day now.”

He was referring to the ousted Ukrainian president Viktor Yanukovych, who left the Ukrainian capital of Kiev in February.

“He [Putin] does not accept that Russia’s neighbors, least of all Ukraine, are independent countries. To him, they are Russia’s “near abroad” and must be brought back under Moscow’s dominion by any means necessary,” McCain said.

“If Ukraine can emerge from this crisis independent, prosperous and anchored firmly in Europe, how long before Russians begin to ask, “Why not us?” McCain claimed.

“That would not just spell the end of Mr. Putin’s imperial dreams; it would strip away the lies that sustain his rule over Russia itself,” he added.

“We must do all we can to demonstrate that the tide of history is with Ukraine — that the political values of the West, and not those of an imperial kleptocracy, are the hope of all nations,” he wrote.

He also criticized President Barack Obama for not handling the crisis in Ukraine, saying Washington made Putin think the United States has a “lack of resolve.”

The Arizona senator, who is currently in Ukraine with a delegation, wrote the article as people in Ukraine’s autonomous region of Crimea will vote on Sunday on whether they want to be part of Ukraine or Russia.

“Crimea must be the place where President Obama recognizes this reality and begins to restore the credibility of the United States as a world leader,” McCain said.

On Thursday, McCain also lashed out at US senators after they failed to impose sanctions against Russia and reach an agreement on a package of economic aid for Ukraine.

On Friday, Russian Foreign Minister Sergei Lavrov and US Secretary of State John Kerry failed to reach an agreement over the Ukraine crisis after six hours of talks.

American officials said the two officials “did not find common ground” and everything now depended on President Putin’s reaction to the referendum in Crimea.

But while John McCain pays lip service to the illegal take over by Israeli forces and other paid thugs behind masks  in Ukraine, his OWN popularity dwindles. According to a new poll from the Public Policy Polling Institute,

the Institute declared McCain the least popular Senator in the country Thursday, based on the results of a three-day phone survey carried out in late February and early March.

The Institute finds McCain is universally reviled across the party spectrum — and being a Republican doesn’t give him any real standing with most Americans who identify politically as Republicans. Only 35 percent of Arizona Republicans surveyed said they approve of the job he’s doing, compared with 55 percent who said they don’t. That barely exceeds his abysmal approval rating among Democrats and independents.

Only 30% of Arizonans approve of the job McCain is doing to 54% who disapprove. There isn’t much variability in his numbers by party — he’s at 35/55 with Republicans, 29/53 with Democrats, and 25/55 with independents.

“The low opinion both Republicans and Democrats have of John McCain now means he could be vulnerable in both the primary and the general election next time around,” said Dean Debnam, President of Public Policy Polling. “George McGovern lost his Senate seat 8 years after losing his Presidential bid and McCain could suffer a similar fate.”

In fact, John McCain has become the LEAST popular senator in the country! While this loser McCain WISHES President Vladimir Putin’s popularity was on a downhill slope as his is, the facts tell a very different story.

More than half of Russians support Putin: Poll

According to the survey conducted between December 24 and 26 last year by the Russian non-governmental polling and sociological research organization Levada-Center with a sampling of 1,603 Russian adults, the findings of which were released on January 27, 56 percent of the respondents said they are opposed to Putin’s resignation.

Twenty-six percent of those surveyed said they want the 61-year-old president to leave office, while 18% had no idea.

On December 28, 2013, Levada agency found that Russians have chosen Putin as the Man of the Year in 2013 for the sixth consecutive year.

Moreover, Mikhail Khodorkovsky, a former Russian oil tycoon, who has recently been pardoned by Putin, got three percent of the votes.

On December 3, 2013, Levada said 61 percent of the respondents voiced approval for Putin’s performance in November 2013, down from 64 percent in October.

Putin’s approval rating exceeded 70 percent for most of his first two terms in 2000-2008, which coincided with an oil-fuelled economic boom, and sometimes rose above 80 percent.

So perhaps the United States should find a way to muzzle their rabid dog John McCain once and for all. After all, he seems to be in his backyard digging himself into a bigger hole day by day. Hopefully, one day, he wont be able to climb out. 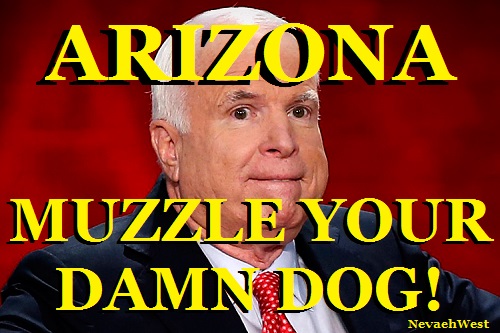