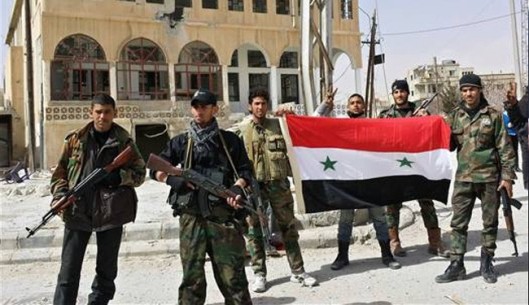 The Syrian Army on Monday continued its large-scale operations, targeting terrorists’ dens and gatherings in several areas around he country.

Operations carried out against terrorists’ dens in Homs

An army unit inflicted heavy losses upon terrorists’ gatherings, killing many terrorists and destroying their weapons in al-Dar al-Kabira and al-Khaledyeh towns, a military source said.

Other army units also destroyed a number of cars, some of which equipped with heavy machineguns, in special operations carried out near al-Shindafieh and in Abu Qatour and Abu Tarraha villages in Jeb al-Jarrah area eastern Homs, SANA reporter said, adding that many terrorists were killed and plenty others were injured during the operations.

A military source told SANA that an army unit killed and injured all members of an armed terrorist group who were attempting to sneak from al-Hussen town in Homs countryside to Lebanese land.

An army unit repelled terrorists’ attempt to attack Gharz central prison to the southeast of Daraa city, killing scores of terrorists and injuring others.

The source pointed out that other army units repelled terrorists’ attempt to attack sawami’a al-Hobob, killing and injuring scores of them.

An army unit foiled a terrorist group’s infiltration attempt into al-Sheikh Said area in Aleppo city, killing many terrorists, injuring others and destroying a machinegun-equipped car.

The source added that e Abdul Wahhab al-Dehni and the terrorist nicknamed Abu Qaoud were identified among the killed terrorists.