Two people – a self-defense member and a Ukrainian soldier – were killed after a sniper opened fire from a partially inhabited building near a military research center in Simferopol.

Earlier, a fake Twitter account supposedly belonging to Prime Minister Sergey Aksyonov had stated that a sniper had indeed been arrested, but that information has since been disproved by all relevant authorities.

As RT producer Lida Vasilevskaya arrived at the scene, the perimeter of the Ukrainian military topography and navigation center was already surrounded by men in camouflage and the situation was “calm.”

The local Interior Ministry said in a press release that shooting came from a house under construction opposite the center and targeted Crimean self-defense units as well the military center itself.

“Earlier today self-defense units were informed that a group of armed men had been discovered in a partially inhabited building,” the press release said. “As the self-defense were taking measures to check, they came under fire, presumably from a sniper rifle,” police said, adding that the shooting came “in two directions from one spot.”

One self-defense unit member was killed and another wounded, police said. One Ukrainian soldier from the military research center was also killed, and another was wounded.

Crimea police and Prosecutor’s Office staff are investigating the attack.

According to RT information, the scene of the shooting is a small Ukrainian military topography research center, and the majority of the staff who work there are women. The center’s area is rather small, and servicemen have only six machine guns and three Makarov guns to provide security. The center reportedly decided to join up with Crimea and Russia and was preparing paperwork to go over.

Aksyonov told Russia’s Channel One that this attack is reminiscent of the Maidan sniper shootings.

“At the moment two people are dead as a result of a provocation, a sabotage. The situation allows me to conclude that the same techniques that were used at Maidan are being used now because most likely one attacker fired at both sides – one Ukrainian serviceman and one man from the self-defense forces of the Autonomous Republic of Crimea were killed.”

“The location of the sniper was identified,” he added.

The commander of the Russian Black Sea Fleet, Aleksandr Vitko, has also agreed that “there was a sniper there, just like on the Maidan.”

“Guys from self-defense told me today that they were afraid of provocations,” Lida Vasilevskaya tweeted.

The Crimean Interior Ministry did not rule out a provocation aimed at complicating the situation in the city after Crimea and Sevastopol were accepted into the Russian Federation.

Immediately after the attack, despite the initial confusion and lack of verified details of what exactly happened in Simferopol, as well as a stream of conflicting reports, Kiev claimed that “Russian soldiers started shooting at Ukrainian servicemen.”

“This is a war crime without any statute of limitations,” coup-appointed Prime Minister Yatsenyuk told a meeting at the Ukrainian Defense Ministry.

In another immediate reaction to the accident, acting President Aleksandr Turchinov authorized Ukrainian troops stationed in Crimea to use firearms to “defend their lives.”

Ukrainian armed forces commander Mikhail Kucin, has also informed his Russian counterpart Valery Gerasimov that the authorization has been given.

In a phone conversation with Gerasimov, Kucin has emphasized de-escalation and a political solution to the crisis, rather than a violent one. 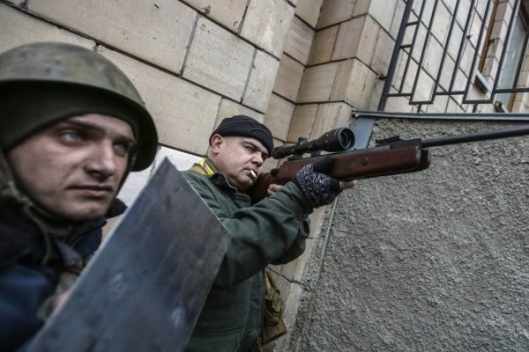 4 thoughts on “Euro-Maiden (NATO dummies) snipers are using in Crimea the same tactic of Kiev: 2 people killed, a self-defense member and a Ukrainian soldier”