A terrorists’ mortar shell claimed the life of a citizen and injured nine others in Harasta Suburb in Damascus Countryside on Tuesday.

A source at the Police Command in the Province said that the shell landed near a bus stop in the Suburb roundabout, pointing out that a citizen died as nine others were injured.

On Monday, three civilians were killed and five others, three of them children, were injured when two mortar rounds fired by terrorists fell in Harasta Suburb.

10 injured, including 8 children, in mortar attacks in Damascus

Mortar shells fired by terrorists hits a makeshift residential center for displaced people in al-Mo’tasem School in al-Zahira and the playfield of al-Nidal Club in Damascus, claiming the lives of 2 children 5 and 6 years old and injuring 11 others.

A source at Damascus Hospital told SANA that two children, 5 and 6 years old, reached the hospital in critical condition and died shortly thereafter, adding that 11 more children were hospitalized, among them 7 from al-Zahira and 4 from the al-Nidal Club. 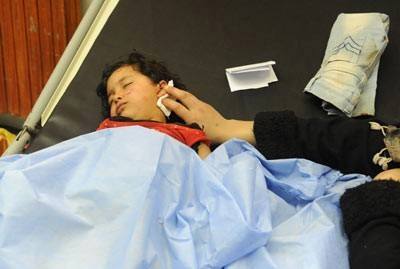 Also in the capital, a mortar shell landed in the yard of a house near School Health Center in the residential Abo Rummaneh area, causing material damage only.

Four citizens were injured by mortar shells in the main street in the same area last Sunday. A female student and another citizen were killed and scores of others were injured in similar mortar attacks that hit the residential areas of al-Afif, Mazzeh and al-Kabbas and near the Higher Education Ministry. 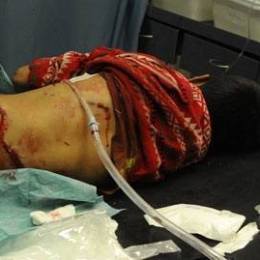 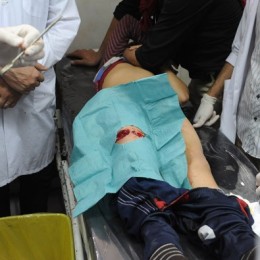 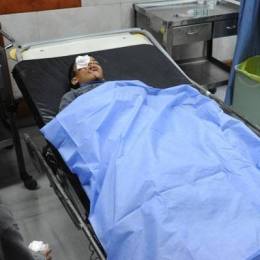 Terrorists fired a rocket shell on Jeb al-Jarrah town to the east of Homs, causing material damage only.

A civilian was killed when an explosive device planted by terrorists went off in Beir al-Hamam area between the villages of al-Soura al-Kabira and Barraq north of Sweida city.

The explosion claimed the life of the driver of a water tanker who was transporting drinking water, and caused damage to the tanker.

A Jihadist websites released a video showing the so called “Islamic State of Iraq and the Levant”, ISIL (a bunch of ignorant criminals) crucifying a citizen in Raqqa city under charges of killing and stealing. (the video has been saved, downloaded and re-uploaded by friends, and is now still available here: https://www.facebook.com/photo.php?v=689586454437447)(save it)

The citizen was crucified by armed men then shot dead in the Syrian eastern city of Raqqa after accusing him of murdering and stealing, but we do not believe it and the fact that he was crucified rather suggests a reprisal for religious fanatical reasons.

It is noteworthy to mention that ISIL is controlling 90% of Raqqa city, (where citizens are used as human shields and bargaining chips to obtain ransoms), where a sort of Islamic jihadist fanatic instruction is in place.