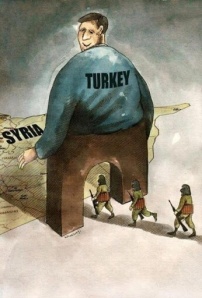 Foreign and Expatriates Ministry called on Wednesday in two identical letters to the UN Secretary-General and Chairman of the UN Security Council to take all measures required to condemn the Turkish involvement in supporting the armed terrorist groups which attacked Kasab district from Liwa Iskenderun and to compel the Turkish government to stop its aggression.

The ministry said in the two identical letters of which SANA received a copy that the Syrian government has drawn the attention of the UN Secretary-General and chairmen of the UN Security Council during the past three years to the acts and violations committed by the Turkish government against Syria’s security and  stability through the Turkish involvement in organizing, receiving, funding and hosting tens of thousands of terrorists from various takfiri movements and facilitating their entry into the Syrian territories and giving them background bases on the Turkish territories.

“After the failure of the attempts of the Turkish regime to undermine Syria, the Turkish army moved by Turkish prime minister’s instructions to launch flagrant aggression on Syria as the Turkish army’s tanks and artillery took part directly in the attack on Kasab, north of Syria, and its surrounding and Syria is aware of the dangers of this act on the regional security and this was conveyed urgently in two identical letters sent on March 21, 2014 to the UN Secretary-General and the UNSC chairman,” the ministry added.

The ministry stressed that the Turkish direct and ongoing involvement until the moment of sending this letter, in addition to being an armed aggression on a founding member state of the UN, is  added to the series of Turkish acts in support of terrorism in Syria since the beginning of the crisis besides its exposed support to “al-Nusra Front” listed by the Security Council as a terrorist organization.

The ministry clarified that it has been clear-cut proven that the sweeping majority of the armed terrorist groups’ members belong to “al-Nusra Front” which is affiliated with al-Qaeda and the Turkish army provided these groups with logistic and direct military support, adding, “Given that the committee of resolutions No. 1267, 1999 and 1989, 2011 designated in its session held May 5th, 2013  the ‘al-Nusra Front for Sham People’  on the unified list of the entities and individuals linked to al-Qaeda which are included in sanctions imposed by the UN on this organization, the Syrian government calls on the Security Council and its subcommittee established pursuant to resolutions No. 1267, 1999 and 1989, 2011 to take all measures required to condemn this dangerous development and compel the Turkish government to stop aggression”.

Syria stresses necessity of tackling the root cause for presence of the United Nations Disengagement Observation Force (UNDOF) in Golan; which is the Israeli occupation, Foreign and Expatriates Ministry said on Wednesday.

The ministry called on UN Security Council to enforce an implementation of its relevant resolutions No. 242, 338 and 491 that call for Israeli withdrawal from all occupied Arab lands, including Syrian Golan.

Syria respects UNDOF mandate and is interested in the safety of the UN employees and headquarters, the letters pointed out, indicating that Israel’s repeated breaches of 1974 disengagement agreement, the UN charter and resolutions-whether through repeated provocative attacks under flimsy pretexts or the direct and indirect support to terrorist groups in the disengagement zone- serve to destabilize the region.

“The measures of the Syrian law-enforcement forces in the disengagement zone and its vicinity come in context of countering terrorist elements who are committing crimes against civilians and peace-keeping forces, and are a response to appeals by locals who come under terrorist attacks as stated by the Secretary-General’s report” the ministry said.

The ministry urged UNSC to adopt immediate measures against sponsors of terrorist groups, “Turning a blind eye to the perils and activities of these terrorist groups in disengagement zone endangers lives of Syrian citizens and the UN personnel and work, and exasperates instability there” the ministry said.