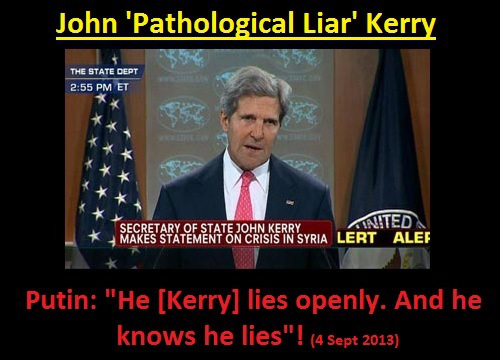 John Kerry has attacked RT for its coverage of the Ukraine crisis, calling it a “propaganda bullhorn.” Neglecting to address the US’ role in the conflict or back up his assertions with any evidence, Kerry said Russia was behind the unrest in Ukraine.

During a press conference with the State Department on Thursday, Secretary of State John Kerry rounded on RT, lashing out at its Ukraine coverage.

Dismissing the entire eastern Ukrainian, anti-Maidan movement as sponsored and controlled by Moscow, Kerry did not address allegations of American involvement in Ukraine. Earlier this week, Russian Foreign Minister Sergey Lavrov said that America was “running the show in Ukraine” and referenced the visits to Kiev of CIA head John Brennan and Vice-President Joe Biden.

“[The West] was convinced for some time that it had a full monopoly on mass media,” said Lavrov in a statement. “Russia Today has won a large audience in the US and Western Europe, not to mention in Latin America and the Arab world.”

The head of RT, Magarita Simonyan, also responded the Kerry, saying the channel was preparing a letter, calling from an apology from the State Department and asking for evidence to back up their assertions.

Back in 2011, then Secretary of State Hillary Clinton declared the US was losing a media war with up-and-coming, alternative outlets like Al Jazeera and RT.

“We are in an information war and we are losing that war,” said Clinton.

Previously, the US State Department had attacked Al Jazeera for broadcasting videos of Osama Bin Laden justifying the 9/11 attacks. They accused the channel of engaging in propaganda for terrorist and tried to get the emir of Qatar to shut it down.

Kerry’s statements follow a flurry of anti-Russian rhetoric from Washington and when it comes to the facts – it’s not the first time broad statements without any factual backing have come out of Washington.

RT correspondent Gayane Chichikyan was shot down by State Department spokesperson Jen Psaki when she asked about the launch of Kiev’s anti-terror operation which coincided with Vice President John Biden and CIA head John Brennan’s visit. Psaki accused Chichikyan of repeating “ludicrous claims” by the Russian government and refused to answer the question.

Psaki treated RT’s Anastasia Churkina in a similar manner back in March when asked to clarify American assertions that Russia had “shot first” in a fight at a Ukrainian military base in Crimea on March 17 that left two people dead. Psaki cut Churkina short with a swift “I think we’re ready to move on” and refrained from answering the question.

Russia has called the coup-appointed government in Kiev “illegitimate” and accused it of instigating anti-Russian policies and alienating the east of the country, which is largely Russian-speaking.

This is information war, Asia Times correspondent Pepe Escobar told RT, commenting on John Kerry’s attack against RT. If you have an alternative script like RT you are banned, because they are afraid, he added.

US Secretary of State John Kerry criticized RT for its coverage of the Ukraine crisis on Thursday, calling it a “propaganda bullhorn,” adding that Russia was behind the unrest in Ukraine without providing any evidence.

RT: Quite strong words from the US Secretary of State regarding this channel. Why do you think he’s singled out RT when commenting on the Ukrainian crisis?

Pepe Escobar: Looks like RT is ruffling very important feathers in the US. So the strong words RT program – oh, network… maybe program – just like the Iraq war: “I’m a guest there and then I’m home.” This is the top US diplomat speaking. It’s ghost-written of course, he did not write these words himself. He didn’t even know what he was reading. Let me have some strong words as well. Let’s talk about bullhorns. Let’s talk about Fox News as a private US bullhorn for the most demented extreme right-wing factions in the US. Let’s talk about BBC as a state-owned British bullhorn for MI5, the Foreign Office and 10 Downing Street. Let’s talk about Al-Jazeera as a state-owned bullhorn for Qatari petro-dollar foreign policy. So, Mr. Secretary of State, I have a proposition for you. Maybe strong words [those are], I can use my soft side as well. Instead of bull-horns and RT program and whining like a kid, why don’t you visit one of RT’s offices, like in Washington, DC, your town for instance, and then we can discuss geopolitics and American foreign policy among adults, among grown-ups and not among the whining children, groupies and cheerleaders? You may be surprised, you may even learn something.

RT: Do you think viewers can get an unbiased view of the events in Ukraine solely from Western mainstream media?

PE: Of course not. And this is information war in fact. And the America’s absolutely terrified. Because now it’s not only CNN all over the world like during the war in Bosnia or during the first Iraq war. Now there is RT, Al-Jazeera, France 24, Deutche Welle, TVE, ССТV, and one day we are going to have Brazilian TV going global, not only in Portuguese. They are terrified of Press TV in Iran, which also broadcasts in English, so they ban Press TV all over the place. And I’m speaking not as an RT employee. I want to make this very clear.

I am a foreign affairs journalist, and I’ve been a foreign correspondent for 30 years. I’ve reported from all over the world, everywhere that matters. I am a frequent guest at RT and I write op-eds for RT. I visited bureaux in London, New-York, DC and Moscow. I met a lot of very bright, very committed and hard-working people. There is no propaganda about this. This is an alternative media enterprise. It’s another point of view. It has a Russian point of view, but it has also a developing global south point of view that until recently was totally absent in the international media escape.

I talk from experience. When you work all over the world you see how the media work all over the world. I see BBC, CNN, Fox News in action in war theaters and interviewing prime ministers – it’s only scripted and it’s only their own script. And if you have an alternative script like RT you are banned, they don’t even talk to you, because they are afraid.

RT: You travel a lot covering events worldwide – how would you describe the level of trust viewers now have for the mainstream media and their take on the Ukrainian crisis in particular?

PE: The narrative of Ukrainian crisis is so complicated. You need tomes and tomes to decipher the nuances. TV is a very instantaneous medium. RT is trying to do something very complicated, which is not only to give the Russian point of view, but also other points of view in the region, including the developing world’s point of view, to counteract what is essentially American propaganda. 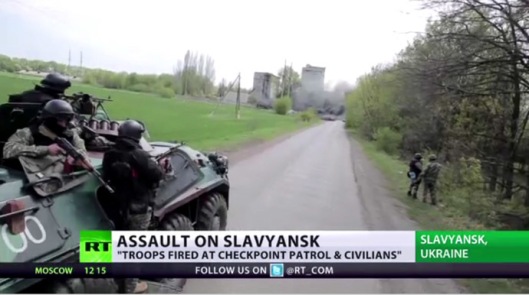 The Americans don’t listen to Russophones in Ukraine, they don’t listen to people who oppose the changes in Kiev. They do not listen to Russian public opinion about the referendum in Crimea. It’s always one-sided. I’ve seen this in Iraq, in Afghanistan, in Pakistan. I’ve seen this during the 1997 Asian financial crisis, when the only spin of American corporate media was that this bunch of irresponsible southern countries, where I am right now – one of them was Thailand – they brought their own demise. And they were not analyzing the deeper causes of the Asian financial crisis, which included a lot of Western interference and currency manipulations. It’s always one-sided.

Speaking as an independent journalist, why do I contribute to RT? Because I made a conscious decision that at least I could explain different points of view, especially the global South point of view, not what the Americans call the international community which is an absolute fiction. It’s what they think is the international community is, because the groupies, the cheerleaders and the shills behind the State Department or the CIA or the Pentagon say it is. It’s not, it’s the global South, and Russia is the part of the global South. Any of the BRICS countries and the emerging countries like Indonesia, South Korea, Malaysia, the Philippines where Obama is going to be in the next few days, selling militarism against China and a trade deal that is going to be good for the US big business. Is America’s big corporate media telling the real story about the Obama’s trip to Asia? Of course not!

[The statements, views and opinions expressed in this column are solely those of the author and do not necessarily represent those of RT – (and SFP)]. 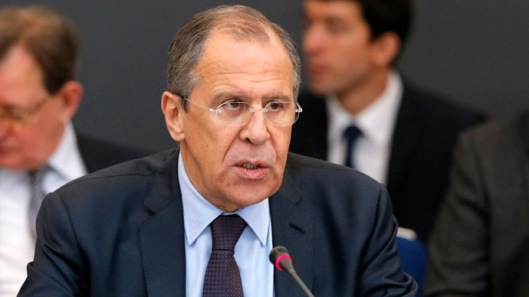 Russia’s Foreign minister Sergey Lavrov has lashed out at US Secretary of State John Kerry over his ‘prosecutorial’ remarks about RT.

The US is trying to pervert everything that is going on in Ukraine. They accuse us of turning on – what was called by John Kerry in a prosecutorial tone – accuse us of switching on what they called the ‘Putin propaganda machine’ called RT,” said Lavrov during the press conference.

“Well, It’s not civilized to call the media like that,” he said, adding that he can “understand John Kerry because RT now presents serious competition for CNN and BBC and other media outlets, which some time ago were confident that they had an absolute monopoly and no competition could threaten them

However, RT news channel has gathered a large audience among US and European viewers, let alone in Latin America and the Arab World, Lavrov said.

According to Lavrov, Russia will actively support these independent views of RT, which are an alternative to what Western propaganda tells the world.

During a press conference with the State Department on Thursday, Secretary of State John Kerry rounded on RT, lashing out at its Ukraine coverage. 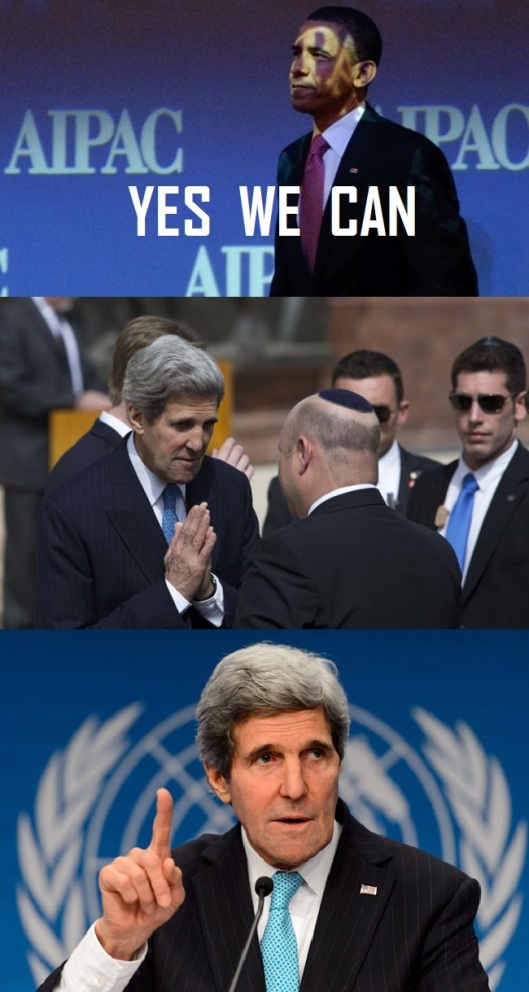