At least 38 anti-government activists died in fire at Odessa’s Trade Unions House after suffocating with smoke or jumping out of windows of the burning building, Ukrainian Interior Ministry reported. The building was set ablaze by the pro-Kiev, US/Euro-puppets, radicals.

Some 50 people, including 10 police officers, were also injured in the incident, the official statement said. It was not immediately clear whether those injured in Friday street clashes in Odessa were included in those numbers.

According to the ministry, the Friday standoff on Odessa included “anti-Maidan” activists on one side and “football fans” from Odessa and Kharkov, as well as “euro-Maidan” activists, on the other. A criminal case on the charges of mass unrest has been opened.

The Trade Unions House was set on fire by pro-Kiev radicals after they surrounded and destroyed the tent camp of anti-government activists that stood in front of the building on Odessa’s Kulikovo Field Square. It was torched in a storming attempt after some of the anti-Maidan activists rallying in the square barricaded themselves inside the building.

Thirty of the victims were found on the floors of the building having apparently suffocated to death with smoke. Eight more died after jumping out of the burning Trade Union House’s windows, according to police.

Earlier reports of the clashes in Odessa said that both sides used Molotov cocktails and, allegedly, gunfire. Part of the pro-Maidan activists reportedly bore insignia of the radical Right Sector group.

A live video stream from inside the building showed disturbing scenes of supposedly dead bodies lying around the rooms with thick smoke in the air and blood stains on the floor.

Most of the bodies filmed had St. George ribbons attached to their clothes, distinguishing the victims as pro-Russian or anti-Kiev activists.

The person filming said he counted up to 25 dead bodies on the upper floors alone.

As the house was engulfed in flames, photos posted on Twitter showed people hanging out of windows and sitting on windowsills of several floors, possibly preparing to jump. Reports claimed that those who jumped and survived were surrounded and beaten by football ultras and the Right Sector. 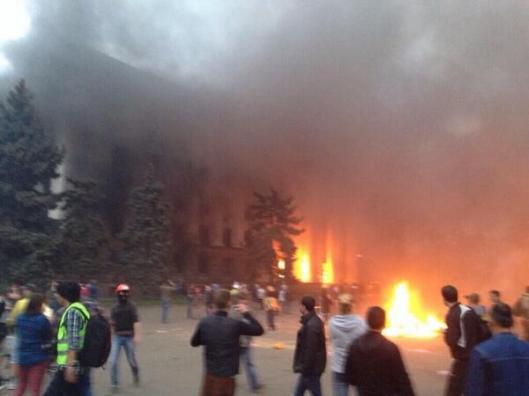 The riot police lines standing beside the building were apparently doing nothing to prevent the violence, the photos showed. Police officers reportedly said they could not do anything because they were “unarmed.”

As people were dying in the burning building, some of the pro-Kiev activists jeered on Twitter that “Colorado beetles are being roasted up in Odessa,” using a derogatory term for pro-Russian activists wearing St. George’s ribbons. Few media outlets followed the developing situation, with thousands of people taking to live streams to see the events unfolding.

However, just as the first official death toll emerged, some Western media and leaders rushed to seemingly downplay the role of pro-Kiev activists in the incident and to blame their rivals instead.

“More than 40 people were killed in Odessa on Friday, most caught in a building set on fire after pro-Russian activists and supporters of Ukrainian unity fought running battles across the southern port city,” Reuters wrote.

“Horrible with at least 38 dead in Odessa. Seems to have started with pro-Russian attempt to get control of buildings. Violence must stop!” Swedish Foreign Minister Carl Bildt wrote on Twitter. Earlier, Bildt blamed “pro-Russian thugs” for the street violence in Odessa. 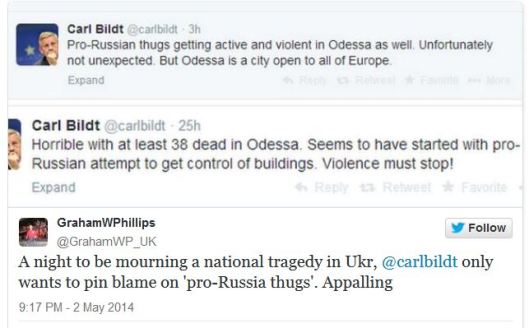