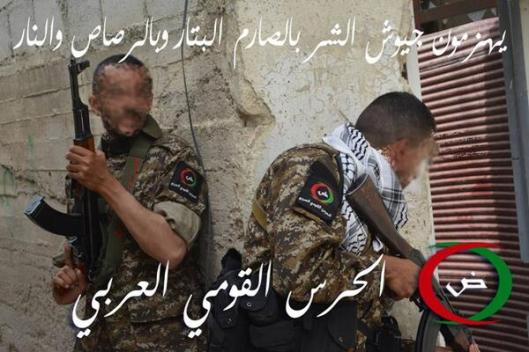 Arab nationalists take up arms in the battle for Syria

Hundreds of Arab nationalists from across the region have formed their own volunteer militia force, the Arab Nationalist Guard (ANG), to fight in Syria on behalf of Bashar al-Assad’s government and military forces.

“I was watching TV and my eyes fell upon an American flag fluttering amid crowds in, at the time, the opposition stronghold town of Hama,” Nidal, a 25-year-old Arab nationalist from Lebanon and subsequent fighter for the ANG, told Al-Akhbar.

“Can you imagine the humiliation and the utter disgust I felt when I saw the [American] flag waving in the breeze in Syria?”

As Nidal flicked the end of his cigarette into the ashtray, he recited Gamal Abdel Nasser’s, Egypt’s first president and pan-Arab leader, famous words: “If America is satisfied with me, know that I’m on the wrong path.”

With Syria’s red, white and black flag pinned to the upper left part of his shirt, Nasser, Nidal’s old friend and fellow ANG fighter, chimed in.

“In 2013 the US bluntly voiced its intention to attack Syria,” Nasser said. “At that moment it became clear that we, as Arab youth who tread the path of the revolutionary Arab Nationalist Movement (ANM), cannot and will not remain neutral in what we believe to be the battle of the survival or partition of not only Syria, but the Arab nation.”

The ANG was first created in May 2013 – following several Israeli air strikes on Syria – by Abu A’ed, a Lebanese citizen from the southern town of Jabal Amal. Abu A’ed, along with several of his comrades from the Arab Nationalist Youth Camp (ANYC), decided to establish the ANG in an effort to preserve the concept and ideology of pan-Arabism, which they felt was being destroyed through Western interference in Syria.

Abu A’ed, said to be in his mid-30s, maintains a very low profile, keen to avoid the Lebanese authorities, who have already detained and questioned him on several occasions regarding his activities in Syria. Lack of evidence led to his release on each occasion. He had previously fought in Iraq against the US invasion, but now spends most of his time in Syria.

The militia is made up of former and current members of the ANYC – a youth camp consisting of Arabs from a variety of pan-Arab parties and movements across the region, which was first set up in the early 1990s in an attempt to revive the concept of Arab nationalism. Today, the camp meets annually in different countries to discuss social and political issues.

The ANYC is a product of the Arab Nationalist Movement (ANM), whose origins can be traced back to the 1940s led by Palestinian Marxist intellectual, George Habash. In the 1950s his group allied with Syrian intellectual Constantin Zureiq, and they became the ANM, which focused on a pan-Arab ideology that rejected imperialism and Zionism, and believed in the existence of a single Arab nation, from the Atlantic Ocean to the Arabian Sea, where all Arabs can unite and not live under any sectarian, ethnic, or religious extremism.

This movement greatly influenced the subsequent formation of pan-Arab political parties across the region.

“In May 2013, the ANG, in collaboration with the Syrian army, set up military camps in Mount Qasioun,” Nidal, Abu A’ed’s brother, explained. “And this is how we entered the battle.”

The ANG now includes four battalions bearing the names of fallen leaders: Wadih Haddad, a Palestinian and Arab nationalist fighter in the Popular Front for the Liberation of Palestine (PFLP) responsible for organizing plane hijackings in the late 1960s and 1970s; Mohammed Brahmi, a secular Tunisian politician who founded the Arab nationalist and socialist People’s Movement after the overthrow of dictator Ben Ali in the Tunisian Revolution and was subsequently assassinated by Islamists in July 2013; Haidar al-Amali, a prominent modern Arab nationalist thinker and politician of Lebanese origin who was injured in the 2006 Israeli war and later died of his wounds; and Jules Jammal, a Syrian naval officer who sank a French ship during the Suez Crisis in late 1956.

According to fighters within the militia, the number of recruits, especially from Egypt and Palestine, increased significantly following the threat of US air strikes on Syria in September 2013.

ANG fighters cooperate closely with the Syrian army and the National Defense Forces (NDF), and they operate in a number of areas in Syria, including the Damascus, Daraa, Homs and Aleppo governorates. While the NDF is made up exclusively of Syrian neighborhood militias, the fighters in the ANG come from a variety of Arab countries, including Palestine, Lebanon, Tunisia, Iraq, Egypt, Yemen and Syria.

Fully-funded and trained by the Syrian army, the fighters have to undergo drills and fire-arm training in ANG or Syrian military camps in Damascus, as well as participate in political classes to adopt an understanding of Arab nationalism before they officially become guards.

As of now, the ANG has over 1,000 guards while the number of volunteers is unknown due to constant fluctuations depending on the location and sensitivity of the battles. Nine fighters in the ANG have been killed so far and more than 40 volunteers have lost their lives.

The majority of fighters are between 18 and 30 years old, with a few 16 and 17 year olds. Former chief officers from the Iraqi and Egyptian armies, and the Palestinian groups, are in their 50s, and their role is dedicated to training and cooperating with the Syrian army regarding military tactics, rather than playing a role on the battle field.

While the ANG has only been in existence for about a year, many of the members have fought in Libya, Palestine, and Iraq.

However, according to the ANG members, their presence in Libya and Iraq was very limited and uninfluential due to lack of funding and arming.

“The Syrian army embraced us and provided us with the arms and training we needed,” Nasser added. “Neither the regime nor the army in both Iraq and Libya had the ability to do so.”

It has also played a role in West and East Ghouta and in the offensive in the al-Qalamoun area. They have also fought in Saidnaya, the Quneitra countryside, Tal al-Jabyeh, Tal al-Hara and al-Dawayeh al-Saghira village.

While many still refer to the the Syrian crisis as a civil war, the presence of foreign fighters from all over the globe on both sides of the conflict proves it to be a global, not local, conflict between international forces with different interests and ideologies.

Dr. Jamal is a 36-year old ex-chief officer in the Egyptian army, who, according to his fellow ANG fighters, believes himself to be “an Arab first, an Arab second, and an Egyptian third.”

Dr. Jamal left the Egyptian army in June 2013 after Muslim Brotherhood–affiliated President Mohammed Mursi voiced his support for the Syrian opposition and called for international intervention in the crisis. He later decided to join the ANG.

For nationalist Egyptians, Bashar al-Assad and the Baath Party are facing a war similar to the tripartite aggression against Abdel Nasser.

Ahmed Osman, known as Abu Bakr al-Masri, was the first ANG Egyptian fighter to be killed in battle. According to the obituary published by the ANG, Abu Bakr, who was in the Jules Jammal battalion, fell in the battle to “liberate Qarra in the Al-Qalamoun province from Wahhabism,” in October 2013, and “kept his promise to the Arab nation and its people and joined the convoy of honor and pride in the battle to defend the unity and dignity of the Syrian Arab Republic.”

ANG’s youngest recruit is Fidaa al-Iraqi, a 16 year old from Iraq who is currently undergoing treatment in Damascus after he was injured in the battle of Tel al-Ahmar, a strategically important hill in rural Quneitra.

In addition to the Iraqis, Egyptians and Yemenis, there are also a number of Lebanese who have signed up to fight with the ANG.

“We fought with, and also against Lebanese fighters on the frontlines in Syria,” Arabi, a 25- year-old fighter from Sidon who returned to Lebanon following an injury in a battle in Daraa, told Al-Akhbar. “We fought side by side with Hezbollah and the Syrian Social Nationalist Party (SSNP) against other Lebanese fighters from different Lebanese provinces.”

According to Arabi, hundreds of Lebanese fighters [who fight on behalf of the Syrian opposition] have reformulated their loyalties in explicitly Muslim terms and prefer to think of themselves first and foremost as Muslims and not as Lebanese or Arabs.

“The Syrian opposition has now become mostly dominated by Islamist fighters and al-Qaeda-linked foreign jihadists who have always been in opposition to Arab nationalists and have long given up on the Palestinian cause,” Arabi said. “Abdel Nasser fought them in the past, and we are fighting them today.”

The ANG believes that the West, using Islamic extremists in the Arab world, orchestrated the Arab Spring to further partition the Arab World, exploit its resources, colonize its people and weaken its armies so that they are no longer capable of fighting Israel.

In Arabi’s opinion, the current Syrian opposition betrayed the Palestinian cause by cooperating with Israel and US in its attempts to overthrow Assad.

“Soldiers in the Syrian army have died in tunnels while smuggling weapons into the Gaza Strip,” he added.

Similar to the newly formed paramilitary force in Syria known as the Lionesses for National Defense (LND), which has more than 500 women fighters, the ANG has recruited about 70 female fighters between the ages of 19-35 from different Syrian provinces to guard checkpoints and carry out security checks in different areas.

Usually decked out in an army fatigue and armed with a Kalashnikov assault rifle, Dalal, a 22-year-old student from Raqqa, is one of the ANG female combatants.

“When the Syrian conflict began in 2011, there was a split among Arab nationalists,” Dalal told Al-Akhbar. “Was it a righteous revolution or a plot orchestrated by the West?”

At that time, Dalal was one of the early supporters of the opposition, keen to see the overthrow of Assad.

“I was mistaken,” Dalal continued. “I don’t regret opposing the regime, after all the regime has huge faults, but I regret supporting the revolution.”

According to Dalal, rebel warlords and Islamic extremists induced bitterness by looting and spreading terror and fear among the populace in opposition-held areas.

“After al-Qaeda supporters took over Raqqa they immediately started implementing their harsh interpretation of Islamic law. Shari’a courts were established and summary punishments were handed down,” Dalal said. “Women were forced to cover their heads and were forbidden from wearing makeup. Music, photography, cigarettes and even education were prohibited.”

Dalal said that witnessing a man getting beheaded in Idlib was the turning point for her.

“Chants of ‘God is Great’ accelerated while hundreds of people, including children, surrounded a chained hostage while the non-Syrian executioner, who had long hair, a red beard and wore a short beige robe, was getting ready. The executioner leaned down and slowly started beheading the prisoner with a small dull knife.”

Fed up with the increasing injustices against Syrians in general and Syrian women in particular, and motivated by her belief in nationalist ideals, Dalal decided to bear arms and fight with the ANG.