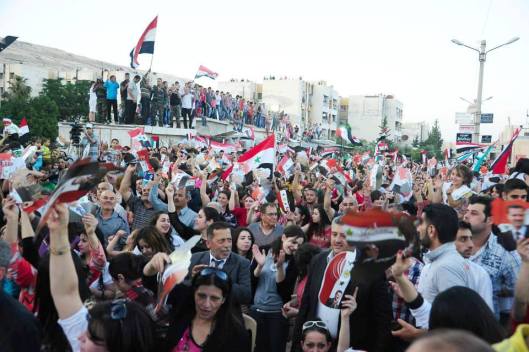 Syrian citizens continued yesterday their activities to show support to the presidential elections, the army and the national principles.

In Damascus, a mass gathering was organized in Yusuf al-Azmeh Square in support of the army, the national principles and the presidential elections.

An oratorical festival was organized near Shamdeen Square in Rukneddin neighborhood,  with participants expressing support to presedential candidate Dr. Bashar al-Assad as the candidate who is capable of building Syria and restoring security.

The participants said that Syria will remain impregnable in the face of its enemies, and that it will continue to combat terrorism and takfiri mentality, asserting that Syrians form a unified society, and calling upon all Syrians to vote in the elections.

People of Daraya and al-Lewan took to the streets in al-Lewan neighborhood to express their support to the Syrian army and for candidate Dr. Bashar al-Assad.

They also voiced support to the national reconciliation process, stressing that holding the elections on time shows that Syria’s decision-making is independent and that the Syrians’ steadfastness foiled the plots of the country’s enemies.

Arab university students studying at faculties in Hama organized a stand in the yard of the dormitory with popular, party and official participation.

The students expressed thanks for Syria and its people for supporting fellow Arab people in brotherly countries and defending the just Arab causes.

“Syria deserves all respect and support so as to overcome its current conditions and for security, stability and prosperity to prevail in it once again,” they said.

The participants stressed their support for presidential candidate Dr. Bashar al-Assad, hailing the “pioneering” achievements that were made under his leadership in the various political, economic, social and cultural fields.

Thousands of citizens gathered in al-Bayyadyeh town in Hama countryside to express support to the Syrian Arab Army in its battle against terrorism and to Candidate Dr. Bashar al-Assad.

A festival was held by workers of the General Electricity Company in Damascus Countryside outside the Company’s building.

The speaker stressed the significance of taking part in the presidential elections as they will “draw up the future of a safe and sable Syria” and ensure the preservation of national sovereignty.

“We will take part in the elections to prove to the whole world that the Syrian people are the most able to choose their president without any foreign interference,” they said.

Minister of Electricity Imad Khamis, also delivered a speech in which he said the elections will crown the matchless efforts the Syrians and state have been exerting to defend the country and help hold its ground against the takfiri terrorist war raging in it.

He praised the unique sacrifices made by electricity workers, many of whom have endangered their lives, and sometimes lost them, while performing their duty of fixing faults and restoring power to areas after terrorist attacks on electricity grids.

In a relevant context, citizens in Yabroud area staged a massive gathering in which they voiced support to the army and the presidential elections.

They called upon all Syrians to take part in the election, stressing their support to candidate Dr. Bashar al-Assad.

They expressed their adherence to national unity and to the firm principles of their country, adding that the elections will contribute to restoring security and stability to the homeland.

In Aleppo, massive crowds of citizens expressed their siding by the upcoming elections and support to the Syrian army in its battle against terrorism.

In a festival organized in Aleppo city, the participants called upon all the Syrians to participate in the elections, saying that the elections will crown the achievements made by the army against the armed terrorist groups.

In a speech during the festival, Governor of Aleppo Wahid Aqqad said that the acts of some conspirator countries in preventing the Syrians on their soils from voting reflect these countries’ hostility regarding the Syrian people.

In Melh area in Sweida, massive crowds of citizens took to the streets to express their support to the presidential elections and for candidate Dr. Bashar al-Assad.

The participants also stressed their total support to the Syrian Army in the battles to eradicate terrorists and restore stability and security to the homeland, highlighting that the participation in the election is a national duty for every Syrian citizen.

In Idleb city, huge crowds gathered in the city in support of the operations of the Syrian army to eradicate terrorists, voicing support to candidate Dr. Bashar al-Assad.

A mass gathering took place in al-Assad Suburb in Harasta area in Damascus countryside to express support to the army and the armed forces in face of terrorism and presidential elections.

Meanwhile,  two popular marches in al-Mukharam and al-Sha’aerat in Homs Countryside were held in support of Army and candidate to presidential elections Dr. Bashar al-Assad.

The areas of al-Shu’erat, Talkalakh and Jiblaya also witnessed various events in support of the Syrian Arab army and for candidate Dr. Bashar al-Assad as their choice in the upcoming presidential elections.

110 families of martyrs were also honored, with the participants voicing appreciation of the sacrifices made by the army as to preserve the country’s sovereignty and dignity, highlighting their adherence to national unity.

Two rallies were organized in al-Furuqlus and Bado in Homs’ eastern countryside, with participants carrying posters of candidate Dr. Bashar al-Assad whom they voiced support for because he embodies their hopes and aspirations.

In Lattakia, a festival was organized in Ugarit Square by the people of al-Slaibeh neighborhood in support of elections, with participants voicing support for candidate Dr. Bashar al-Assad and expressing commitment to independent decision-making.

In the city of Jableh, an activity was organized on the seaside corniche to express support for the elections, the Syrian Arab Army, and national standards.

Participants said that elections symbolize Syria’s sovereignty and its independent decision-making, and confirm that Syrians can resolve their problems without any foreign interference.

In Tartous, an activity was organized at the seaside corniche to express support for national standards and candidate Dr. Bashar al-Assad, with head of the Journalists Union Elias Murad attending the event and delivering a speech in which he saluted the members of the Syrian Arab Army.

A similar activity was organized in the town of Naqib in Tartous province, in which participants voiced support for candidate al-Assad and determination to holding the elections successfully and on time. Murad also attended this event and delivered a speech. 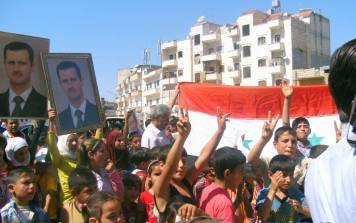