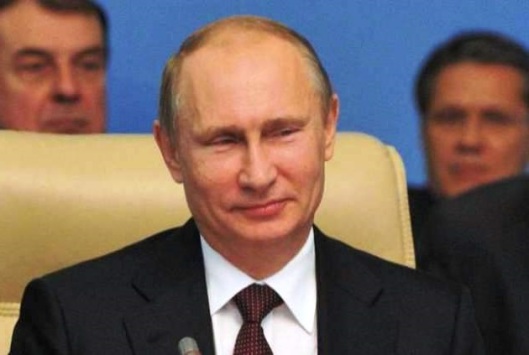 President vLADIMIR Putin meets with the heads of global media during the last day of the 18th International Economic Forum 2014 in St. Petersburg

Putin on Snowden: Russia not kind of country which gives up those who fight for human rights

The US is to blame for whistleblower Edward Snowden ending up in Moscow, Russian President Vladimir Putin said on Friday. “[Snowden] arrived at our transit zone and later it was explained that no one wanted him … And they [the Americans] scared everyone, and he ended up in our transit zone. What were we supposed to do? Russia is not the type of country that gives up fighters for human rights,” Putin said during the plenary session of the St. Petersburg International Economic Forum.

Putin: What we see now is full-scale civil war in Ukrain

Though Ukraine continues to plunge into chaos, Russia is ready to work with whoever is elected in the presidential elections on May 25, President Vladimir Putin said. He added that after the ballot all military actions must be stopped in the country.

Russian President Vladimir Putin accused UK Prince Charles of unacceptable and unroyal behaviour by comparing him with Adolf Hitler. Earlier Moscow demanded an official explanation from the UK over reported comments in which Prince Charles, heir to the British throne, compared Vladimir Putin’s actions in Ukraine to those of Adolf Hitler in the run up to World War II.

Putin and the leopard

Russian President Vladimir Putin visited the Breeding and Rehabilitation Center for leopards at Sochi National Park. He went into the cage with a wild animal. Local media say some journalists came out of the cage with scratches, but Putin himself escaped unhurt.

2 thoughts on ““Isolating Russia is not possible”, President Putin, the statesman that even the Americans would like to have (video collection)”