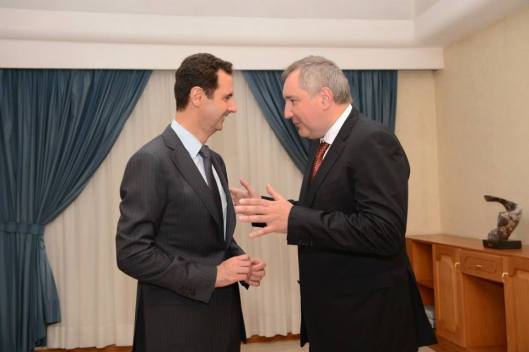 There has been speculation on the level of Russia’s support to Syria and the extent Russia will go to. It would seem that Russia was trying to deal diplomatically with the US in order to avoid escalation but with recent events in Ukraine it looks like the gloves have been taken off. We should also keep in mind the disappearance of MH370 and possibility that it was hijacked by the US in order to test China’s surveillance and other capacities as well as to deliver a chilling threat to China and Russia regarding America’s capacities in the area of electro-magnetic/directed energy weapons.  The more the Americans try to bully and manipulate Russia and China in this fight to maintain their total global dominance the speedier they hasten their demise.

Here is an important article that Ghassan and I translated.

Russian President Vladimir Putin has put an end to the innuendos regarding his stand on Syria after the Ukrainian earthquake.  He has reached new agreements with the administration of President Bashar Al Assad which assures that Moscow now is even more adamant in its support to the Syrian government than it was before the stand-off with Kiev and the West.

If one looks closely at the Russian official it becomes clear that what is meant here, first and foremost, is to elevate military support to Syria.  Rogozin is far from being an ordinary person.  He is much more lethal than just a Deputy Premier.  Since he was appointed as a Deputy Premier by Dimitry Medvedev in 2011, he was put in charge of overseeing the military industries and to study and outline all that relates to defence needs. His success led to the extension of his tenure which has been renewed again since 2012 and he holds in his hands most of Russia’s military secrets.

This Russian Deputy Premier who is cooperating with the Syrian side, comes from the heart of Russian military warfare industries.  It is rumoured that the CIA and Israeli intelligence are interested in knowing more about him.  The White House and the American military administration consider him one of the most important Russian officials. Forbes Magazine described him as the chief of Russian Foreign policy hawks. Washington accuses him personally of breaching the sovereignty of Ukrainian soil.  His “inflammatory” statements about Crimea are often quoted.

It is for these reasons that the American administration listed the name of Dimitry Rogozin on the sanction list, considering him persona non grata, rendering him unable to travel to the United States, Canada and some European Union countries.  His properties in these countries (if indeed he has any at all) have been frozen.  It is said that he ridicules these decisions.  He argues that where you have mutiny you have to stop it and where you have terrorism you need to crush it.  He is a devout student of the vision of Putin himself. His presence will enhance decisive military actions in Syria.

It would be quite naïve to believe that Putin has appointed this Russian hawk, who is in charge of many sensitive military portfolios,  just for the sake of forming a committee for economic cooperation with Syria.  The information asserts that his appointment in this position is to elevate the level of military support.  This has become more prominent now after the other axis has determined to try to change the balance of power in Syria despite its continued failures thus far.

The Syrian military administration does not normally reveal details of military arsenal that it receives from Russia.  What is also unclear is the extent and volume of direct Russian aid all the way from missiles, fighter jets, communication, surveillance, other weapons, training, experts etc. The outcome of this was clear when a Turkish fighter was downed as well as events on the battlefields.

The timing of the appointment of Rogozin coincides with the opening of the Turkish and Saudi military warehouses to the rebels as well as the increase of supplies of TOW anti-tank missiles which occured after Ahmed Jarba was received [in Washington].  The Russian decision also coincided with the meeting in London of the “Friends of Syria” which culminated in increasing the level of support to the rebels, a decision that was referred to by the Russian Deputy Foreign Minister Mikhail Bogdanov as being “destructive and biased”.

Russia did not stop at this level, but went further by declaring a positive pre-emptive statement about the Syrian Presidential elections even before it took place. Alexander Lokachivich,  a spokesperson for the Russian Ministry for Foreign Affairs stated that  “ …the upcoming Syrian Presidential elections is bound to become an important step towards protecting the government institutions and the peaceful settlement for the crisis in the country”.

It is therefore not surprising that the Russian Deputy Foreign Minister declared yesterday that his country is determined to veto the decision of referring Syria to the International Criminal Court. Yesterday, Russia and China have jointly elevated their international support for Damascus. In a closing statement to the Russian President’s visit to China in Shanghai, a joint statement said that “…Moscow and Beijing condemn any foreign interference in Syria and support the Syrian government and the international community in their effort to rid Syria of its chemical weapons and jointly call for the end of the humanitarian crisis in Syria.”  A statement like this is clearly directed to Washington, London, Paris and some regional countries.

This is what is revealed openly. But what is spoken privately between Putin and Assad is another story.

Talks during the meeting dealt with bilateral relations between Syria and Russia and the importance of broadening aspects of the standing cooperation, with President al-Assad appreciating Russia’s stances in support of the Syrian people in their war against terrorism.

The President affirmed the role of Russia in preserving stability in the world and confronting the western attempts of dominating countries in the region.

President al-Assad clarified that the west is always seeking to subjugate countries which do not agree to its hegemony in various ways from time to time, however, the most dangerous of these way is supporting extremism and terrorism in those countries to destabilize and weaken them.

The president added that the practices of the west necessitate forming an international movement to exert pressure over the countries which are supporting terrorism to stop their practices.

For his part, Rogozin stressed the Russian firm stance in bolstering Syria’s steadfastness and its complete readiness to consolidate cooperation between the two sides in various ways, expressing hope that the joint committee of the two countries will be held soon.

He described the policy of the west towards Syria as ignoring the genuine interests of the Syrian people, asserting that the presidential elections gain great importance in light of the current circumstances because they give the Syrians the opportunity to express their will and shape the future of their country far from foreign dictations.

In a statement following the meeting, Rogozin considered the policy of the west towards Syria and the presidential elections as “immoral and ignoring the interests of the Syrian people.”

He called on the western countries to take a stance similar to that of Russia and the countries which see no alternative to the political dialogue far from political dictations.

He noted that Russia looks with confidence at the future of Syria and with commitment to the principles of the international legitimacy and law, adding that the Syrian side was invited to visit Russia and hold a session for the Syrian-Russian governmental committee which is dedicated to economic, commercial, technical and scientific cooperation.

Concerning the chemical weapons in Syria, Rogozin mentioned the statement of the UN Secretary-General in which he talked about the possibility of delaying the date of transporting weapons outside Syria to a new deadline, addressing the countries which are supporting the gunmen to give orders to ensure secure channels to solve all issues related to ending this matter and reviewing it at the Security Council.