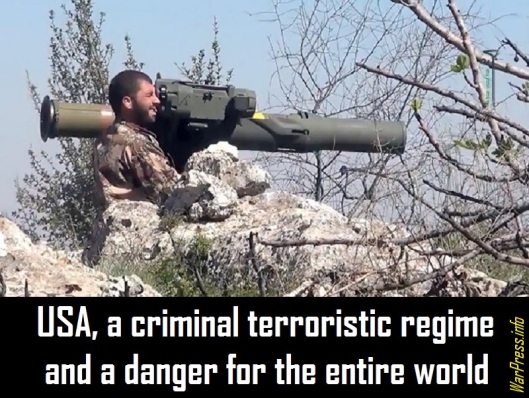 The Russian Foreign Ministry stressed Saturday that the US weapon supplies to the armed terrorist groups in Syria will escalate the situation in it and rebound fire to the countries supporting these groups.

In a statement issued Friday, the Ministry said “Russia is seriously concerned over media reports saying the US administration is intending to boost weapon supplies to the “moderate” gunmen on the Syrian armed opposition in Syria.”

The statement added that many media reports and publications confirm that Washington offered “lethal military aid” to the armed terrorist groups in Syria though the US has mentioned only non-lethal aid, which constitutes an escalation of the crisis in Syria.

“Besides, modern weapon supplies to “verified gunmen” will in all likelihood fall into the hands of terrorists who will be able to use them in any corner of the world, in particular against the interests of their foreign sponsor,” the statement added.

It stressed that Moscow strongly advocates a peaceful solution to the crisis in Syria, calling for resuming dialogue in the framework of Geneva Conference.

The Ministry pointed out that at the time of the presidential elections’ final stage in Syria, the illegal armed groups intensified terrorist activities aimed at escalating tensions and intimidating the civilians ahead of the elections on June 3.

It indicated that the Syrian Arab Army has advanced in the strategically important Damascus suburb, Mliha, near the international airport, and achieved some success in Aleppo where it was able to lift the siege on Aleppo central prison.

The statement said that while fighting the armed terrorist groups, where jihadists from all over the world play a key role in the crisis in Syria, the Syrian government has offered a chance to the people who became gunmen by mistake and have not committed grave crimes to get back to normal life.

The Ministry also hailed the expansion of the national reconciliations to include a number of neighborhoods and areas near Damascus.Truce is expected soon in Waar neighborhood, Homs, it added.

Press reports revealed that thousands of gunmen are being trained in Jordan under the supervision of the US Central Intelligence Agency (CIA) in preparation for sending them to south Syria in addition to reports stressing that US- Tao missiles were delivered to the armed terrorist groups , particularly to north Syria.

1 thought on “Moscow: “US weapon supplies to armed groups in Syria escalate crisis””