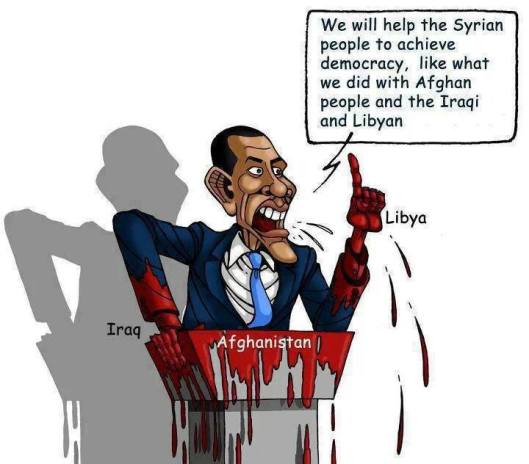 Elections in Syria:
The People Say No to Foreign Intervention

After three years of a war financed, armed and manned by the U.S. and its allies, the Syrian people cast ballots wherever it was possible. The U.S. position is that Syria’s vote is illegitimate because of the conflict, but Ukraine’s elections are legitimate despite that country’s armed conflict. It is clear that the U.S. objective in Syria “is more death, more war and more chaos.”

“Tens of thousands of ordinary Syrians have braved threats and violence to participate in the election process.”

Defying threats of violence, tens of thousands of ordinary Syrians went to the polls to cast a vote that was more about Syrian dignity and self-determination than any of the candidates on the ballot. After three years of unimaginable atrocities fomented by a demented and dying U.S. empire, with the assistance of the royalist monarchies of the Middle East and the gangster states of NATO, the Syrian people demonstrated, by their participation, that they had not surrendered their national sovereignty to the geo-strategic interests of the U.S. and its colonial allies in Europe and Israel.

The dominant narrative on Syria, carefully cultivated by Western state propagandists and dutifully disseminated by their auxiliaries in the corporate media, is that the conflict in Syria is a courageous fight on the part of the majority of the Syrian people against the brutal dictatorship of Bashar al-Assad. As the story goes, the al-Assad “regime,” (it is never referred to as a government), can only maintain its power through the use of force. By attacking “its own citizens,” the regime, representing the minority Alawite community, can only maintain its dominance over the rest of the country through sheer terror.

However, events in Syria, with the election being a dramatic example, continue to reveal fissures in that story.

First, it became clear that substantial numbers of non-Alawite people and communities support the government. And even those elements of Syrian society that were not enthusiastic supporters of the government grew to understand that the legitimate indigenous opposition had been displaced by powerful non-Syrian forces from the U.S. and the Gulf States who provided material, political and diplomatic support to an opposition that not only had tenuous ties to the country but seemed only committed to waging war. This convinced many that the only politically consistent option was to support the government, as an expression of support for Syria’s sovereignty and its’ national project.

As a result, not only did popular support for the government hold over the last three years of carnage, it expanded to include those in the opposition who were against the destruction of the country and the slimy Syrian ex-pats who traveled from one European capital to another begging for the U.S. and NATO to do what it did in Libya – destroy the infrastructure of the country through the use of NATO air power and flood the country with weapons.

But the most graphic undermining of the dominant Western narrative has been the participation of tens of thousands of ordinary Syrians who have braved threats and violence to participate in the election process. 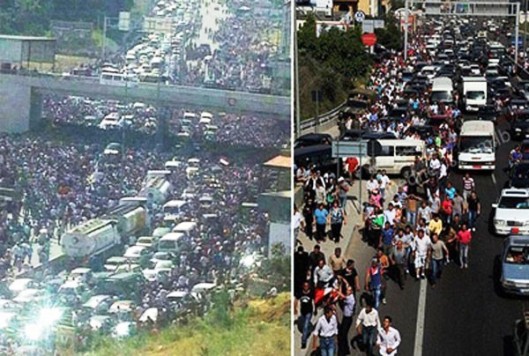 Western corporate news outlets, especially in the U.S., were unable to explain the huge turnout of Syrian refugees voting in Lebanon preceding the election on Tuesday, so they just decided not to cover it. Images of Syrians displaced by war yet backing al Assad for president did not support the carefully crafted story that the only people fleeting war were those who had been terrorized to do so by the government.

Instead, the U.S. press raised the question of the “legitimacy” of elections taking place in a country involved in a “civil war,” a position consistent with their narrative of the war being one between the Syrian people and the government as opposed to what it has turned out to be – a war largely being fought by foreign forces, with the indigenous opposition forces allied with the feckless Syrian National Coalition; isolated, out-gunned and militarily irrelevant.

And while the U.S. press uncritically propagated the position of the U.S. state, which wrote off the election as illegitimate and a farce, the media seemed not to notice the contradictory position of the U.S. writing off the election in Syria because of conflict but giving enthusiastic support to the election in Ukraine in the midst of a conflict and contested legitimacy. The Western media could explore a few obvious questions if it was really independent, such as: what makes the election in Ukraine legitimate when half of the country boycotts the vote and the national army violently attacks its own citizens in Eastern Ukraine who refused to recognize the legitimacy of the coup-makers in Kiev?

Other questions might be: if they deem it appropriate to support an election in Ukraine, why would the Obama Administration violently oppose elections in Syria, especially if, as it claims, the majority of the people oppose the current government? Wouldn’t the illegitimacy of the government in Syria be confirmed by the low turnout, even in areas where there was a modicum of security? If Syrian authorities organized opportunities for displaced Syrians in various countries around the world to vote and very few participated, wouldn’t that verify the Administration’s position that the al Assad government lacks popular support?

Yet in various European capitals and other countries like Turkey, United Arab Emirates, Jordan and Egypt, efforts were made to block the opportunity for displaced Syrians to vote in their election – why? Were the authorities afraid that the narrative of non-support for al Assad might be challenged if there was a proliferation of images like the ones that came out of Lebanon showing thousands of Syrians marching to the polls holding signs of Bashar al Assad?

It will be interesting to see how the authorities and their spokespeople in the corporate media spin the voting process in Syria.

The U.S. position is a position of continued war in Syria

Secretary of State John Kerry declared that Syria’s presidential election was a “farce,” and that the U.S. and its partners are prepared to quickly redouble efforts to support opposition forces in the county. The meaning of this position is that it does not matter what kind of public display of support is given to al Assad or anyone who might emerge as the head of state in Syria, the U.S. objective is more death, more war and more chaos.

This is the essence of the “new” global strategy unveiled by President Obama during his foreign policy speech at West Point last week. The U.S. declaration that it will “change the dynamics on the ground in Syria” came out of a meeting of the so-called “Friends of Syria,” a motley collection of 11 Western colonial nations and their Arab creations. The Obama Administration intends to work though these kinds of regional formations and alliances to advance its strategic objectives with as minimal a cost to the U.S. as possible. Of course, the interests and desires of the states or peoples involved are of secondary concern. The desire on the part of the majority of the people to end the conflict in Syria is not even considered. As part of the effort to secure public support in the U.S. for destabilizing and then attacking Syria it was posited that by deposing the al Assad government a real democracy can be introduced. That is why policymakers pretended to back so-called moderate elements that support democracy. But over the last year or so, even that proposal has been eliminated. Democracy in Syria is as much a threat to U.S. imperialist interests as it is in Ukraine – and increasingly even in the U.S.

Policymakers in Washington and London have already made the shift to supporting what are being called “moderate” Islamists forces grouped around the Islamic Front (IF) with al Nusrah, al Qaeda’s official Syrian affiliate, operating in the background. The problem for the Syrian people is that these moderates the west is supporting are Salafi-Wahhabi fundamentalists who reject representative democracy and support the imposition of sharia law in Syria. So while the U.S. and their allies characterize the election in Syria a farce, their solution is to back forces who would eliminate even the pretext of democratic participation. This is the progress that is being imposed on the secular, pluralist society of Syria by the Western “liberators.”

It is not about al Assad, it is about the people of Syria and imperialism:

Questions of democratic legitimacy have never determined U.S. relationships with any state where the U.S. had strategic and economic interests. If a commitment to democracy and democratic governance was the determining factor for U.S. support, the Obama Administration would not be in alliance with the dictatorship of the royalists in the Gulf states, it would have condemned the coups in Honduras and Egypt, not given diplomatic or economic support to the coup in Ukraine, and would not be supporting right-wing elements in Venezuela attempting to destabilize the democratically-elected government in that country.

There was a time when this position would have been clear to the peace and anti-war, anti-imperialist progressive and left movements in the U.S. and the West. But over the last two decades, with the ideological infiltration of the left by liberalism, social democracy and the rightist tendencies of “anti-authoritarian” anarchism, the resulting political confusion has seen a consistent alignment of the left with the imperial project of the U.S. – from the attacks on the Federal Republic of Yugoslavia through to attacks on nationalist projects throughout the global South, from Libya to Syria. Since the last gasp of anti-imperialism solidarity represented by the massive marches in opposition to the illegal attack on Iraq in 2003, the peace, anti-war and anti-imperialist movements have been in relative disarray.

“Political confusion has seen a consistent alignment of the left with the imperial project of the U.S.”

This disarray and ineffectiveness is taking place right at the historical moment when in order to maintain its global hegemony, the colonial/capitalist West has decided to revert to what it does best – spread death and destruction. For those of us who understand our responsibility situated, as we are, at the center of this monstrosity called the U.S., we have to strip away the veneer of humanitarianism that hides the ugly inner logic of domination and we have to “struggle” – a term now passé for the hip post-modern nihilist left.

When a people, like the people of Syria, demonstrate their commitment to the integrity of their own national experience in opposition to the efforts of the imperialist states that we reside in, the only principled position we can take is to stand in solidarity with those people, no matter how we see the internal contradictions of that nation/state. The people of Syria have said no to foreign intervention. Those of us in the imperialist West, can we do anything less?

Ajamu Baraka, a long-time human rights activist and organizer, is an editor and contributing columnist for Black Agenda Report. Baraka can be reached at info.abaraka@gmail.com and www.AjamuBaraka.com

Disclaimer: The contents of this article are of sole responsibility of the author

4 thoughts on “US-backed politicians act against Syrian democratic elections: is America a depraved ‘democracy’ or the true face of the ‘democratic’ Western depravity?”