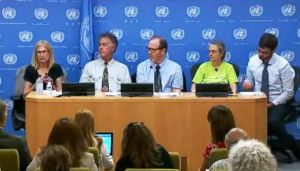 A group of Americans, who observed the Syrian presidential election first hand, reported at the United Nations on what they witnessed.~ As a group, they described the election in Syria as successful, free and transparent.~ They also called for an end to foreign support for anti-Damascus mercenary terrorist.

June 19, 2014 at 11am:
the Syrian Mission to the United Nations convened a press conference featuring people from the US who observed the recent elections.

Five minutes into the opening comments of Syrian Ambassador Bashar Al-Jaafari, the UN webcast cut off. The thousands of journalists, political analysts, and others who view UN webcasts each day from all over the world were denied the ability to watch the press conference, and hear what was said.

This is not the first time this has happened when Bashar Jaafari is speaking. This occurred on June 7th earlier this year, and on numerous occasions throughout 2013.  Reporters at Inner City Press reported that this is not accidental, but was ordered by Michele DuBach, Acting Deputy Director-News & Media Operations.

This comes in the context of other UN harassment of Syria. UN Secretary-General Ban Ki Moon has met with Ahmad Jarba, a leader of violent insurgent groups in Syria, but has refused to meet with Bashar Jaafari. Though Syria pays over $1 million to the UN each year, it is not being treated as an equal member state.

Watch the important, UN Press Conference about Syria, that someone obviously doesn’t want you, or anyone else, to see:

FULL VIDEO OF THE PRESS CONFERENCE

US Observers Report on Syrian Election at UN