The leader of self-proclaimed Donetsk People’s Republic in eastern Ukraine agreed to a ceasefire in the region until 10 a.m. local time on Friday. He stressed that the self-defense force’s ceasefire will come only as a reciprocal move.

“The duration of the ceasefire is the same as announced previously – before 10 a.m. on June 27. During this period monitoring by Russian and OSCE representatives will be organized. We hope that during ceasefire from both sides we will be able to reach an agreement and start consultations on the process of peaceful settlement of the conflict,” 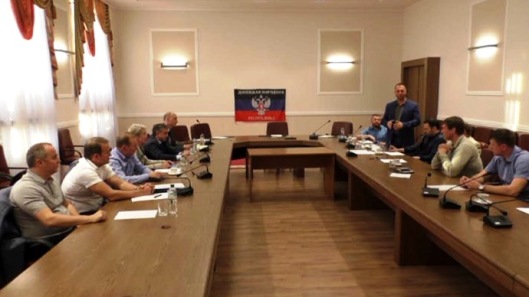 Ukrainian, Russian and OSCE representatives gathered in Donetsk on June 23 for talks on peaceful settlement of the conflict.

OSCE special envoy to Ukraine Heidi Tagliavini, Russia’s ambassador to the country Mikhail Zurabov, representatives of the self-proclaimed people’s republics of Donetsk and Lugansk, as well as the former president of Ukraine Leonid Kuchma met to define stages of a peace plan in the country’s east.

Boroday has pointed out that the Donetsk meeting on Monday was not formal talks, but rather unofficial preliminary consultations. “In the DNR government house at least some dialogue has begun from the side of Kiev, who had preferred to speak the language of heavy artillery for several months,” he was cited as saying by Itar-Tass news agency.

Earlier Ukrainian President Petro Poroshenko laid out his plan to deescalate the conflict, announcing a unilateral ceasefire from June 20 until June 27, the day Kiev plans to sign the EU Association agreement. On Sunday he issued a warning, stating that he had an alternative “detailed plan” of regaining control over south-eastern Ukraine should his current proposal for a truce fail to bring results.

The news on mutual ceasefire has been confirmed by former Ukrainian president Leonid Kuchma. “We agreed on bilateral ceasefire lasting until 10 a.m. on June 27,” said Kuchma after taking part in talks on the conflict’s settlement in Donetsk on June 23.

The DNR leader named two reasons for which the Donetsk meeting cannot be considered as formal talks. “A fully valid negotiation process is possible only after Kiev fulfils seven conditions, proposed today by the co-chairman of the National Front of Novorossiya Oleg Tsarev. These conditions are our common position,” Boroday said.

Among the conditions are withdrawal of Kiev forces from the territories of the self-proclaimed people’s republics of Donetsk and Lugansk, compensation payments to the conflict’s victims by Kiev, amnesty to militia and political prisoners, as well as agreement between the Ukrainian president and parliaments of the people’s republics on a constitutional act, defining their status.

The absence of official state powers and status of the Donetsk meeting participants was named as the second reason by the DNR leader, who presumably referred to Kiev’s representative, ex-president Leonid Kuchma.

The involvement of the latter was initiated by Ukrainian President Petro Poroshenko, who is said to have had a meeting with Ukrainian representatives to the talks in Kiev before they headed for Donetsk. “Leonid Kuchma’s participation indicates the Ukrainian president’s close attention to this mission,” said Poroshenko, according to his press service statement.

Russia’s ambassador to Ukraine Mikhail Zurabov expects the talks to continue. “We expect that in the near future position of representatives of Donetsk and Lugansk will be additionally worked out, and they will announce their readiness to continue consultations in order to solve two problems: firstly, to achieve a sustainable truce and sustainable peace, non-renewal of fire, and secondly – the launch of an inclusive negotiation process,” Zurabov told Rossiya 24 TV.

Ahead of the Donetsk meeting, one of Ukraine’s representatives, Viktor Medvedchuk, leader of “Ukrainian Choice” political organization, identified the aim of the talks as “implementation of the peace plan to resolve the situation in eastern Ukraine, end the bloodshed, preventing people’s deaths, preserving the country’s unity.”

The Russian President’s press-secretary Dmitry Peskov said that Vladimir Putin welcomed the participation of Viktor Medvedchuk in the talks. “He has consistently supported the idea of Ukraine’s federalization. He is respected in Kiev, and he is also familiar to the West,” Peskov said. He added that “the Russian President has repeatedly stated that a solution to Ukrainian crisis can only be possible through peaceful dialogue and consideration of the interests of eastern regions of the country.”

Leonid Slutsky, the chairman of the Russian State Duma committee for CIS affairs, believes the meeting Monday in Donetsk may become a turning point in overcoming the Ukrainian crisis. Slutsky also said he found the team of participants “the strongest list of negotiators of all possible. Hopefully, it will become the most effective too.”

President Vladimir Putin has proposed that the upper house call off the March 1 resolution allowing the head of state to use the armed forces on the territory of Ukraine, said presidential press secretary Dmitry Peskov.

“Because of the beginning of the three-party talks to settle down the situation in the eastern parts of Ukraine, the head of state has addressed to the Federation Council to repeal the resolution on the use of Russian armed forces on the territory of Ukraine,” ITAR-TASS cited Peskov as saying.

The president sent an address to Federation Council Valentina Matvienko today morning, ahead of leaving on official visit to Vienna.

Deputy Head of the Federation Council’s International Committee Andrey Klimov confirmed the upper house will back Putin’s proposal and repeal the resolution on Wednesday, June 25.

Ukrainian President Petro Poroshenko has called the proposal of his Russian counterpart a “first practical step towards settlement of the situation in eastern Ukraine, reported the Ukrainian president’s press-service in a specially released statement.

The EU welcomed Putin’s decision to reject the right to use military force to settle the crisis in Ukraine and welcomes its earliest realization, the press-secretary of EU foreign affairs chief Catherine Ashton stated.

The Federation Council’s resolution of March 1 agreed on the president‘s right to use military force on the territory of the neighboring Ukraine “until the normalization of the social and political situation in that country.”

The resolution was adopted following a presidential address demanding security be maintained “for citizens of the Russian Federation, our compatriots and personnel of the Russian contingent deployed in accordance with international agreements on the territory of the Autonomous Crimea Republic of Ukraine.”

The resolution was adopted in accordance of the first part of the Article 102 of the Constitution of the Russian Federation.

On Monday evening, the leader of the self-proclaimed Donetsk People’s Republic in eastern Ukraine agreed to a ceasefire in the region until 10am local time on Friday. He stressed that the self-defense force’s ceasefire will come only as a reciprocal move.

Earlier, Ukrainian President Petro Poroshenko laid out his plan to deescalate the conflict, announcing a unilateral ceasefire from June 20 until June 27, the day Kiev plans to sign the EU Association agreement. On Sunday he issued a warning, stating that he had an alternative “detailed plan” of regaining control over south-eastern Ukraine, should his current proposal for a truce fail to bring results.

Despite the “unilateral ceasefire” announced by Kiev the fighting in eastern Ukraine continued, and there have been clashes in some areas, the Lugansk People’s Republic said in a statement. It was reported that an artillery shell hit the roof of a kindergarten in Kramatorsk, partly destroying the building. At the same time, self-defense troops of the Donetsk People’s Republic targeted Ukrainian armed forces positions at Karachun Mountain, Itar-Tass reports.

The Ukraine Crisis – What You’re Not Being Told

The European and American public are being systematically lied to about the Ukraine crisis.

In this video we’re going to provide you with compelling evidence that the crimes against humanity committed in Kiev earlier this year were in fact committed by the new coalition government and that officials in the E.U. and the United States knew full well who committed these crimes and that they are protecting and financially supporting the real criminals.

On February 20th of 2013 the world was shocked by video footage of snipers firing on protesters in Kiev Ukraine. Twenty one people were murdered, and it was widely assumed that President Victor Yanukovich and his supporters were behind the attacks. However a phone conversation between EU foreign policy chief Cathy Ashton and Estonia’s foreign minister Urmas Paet leaked to the public on March 5th reveals that the snipers in were actually from the new coalition government, and that Western diplomats knew this and covered it up.

Urmas Paet: “All the evidence shows that the people who were killed by snipers from both sides, among police men and people in the street, that they were the same snipers killing people from both sides.”
Cathy Ashton: “Well that’s, yeah…”
Urmas Paet: “And she also showed me some photos and she said that has medical doctor, she can say that it is the same handwriting…”
Cathy Ashton: “Yeah…”
Urmas Paet: “Same type of bullets… and it’s really disturbing that now the new coalition, that they don’t want to investigate what exactly happened. So that there is now stronger and stronger understanding that behind the snipers, it was not Yanukovich, but it was somebody from the new coalition.”