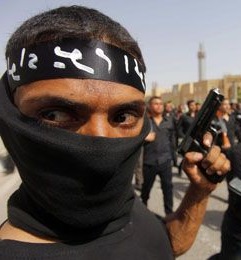 A source at the Police Command said that terrorists broke into the Mosque while the Imam was performing nightly prayers (Taraweh prayers) with a number of citizens and opened fire on him, which resulted in his immediate death.

Similar crimes have been committed by terrorists in various areas, the latest was in last February where a muezzin (a person who recites the call to prayer at a mosque) was assassinated upon leaving his home in M’adamiyet al-Qalamoun, in the countryside of Damascus.

Also in Qalamoun area, a terrorist group from the so-called ‘Al-Islam Brigade’ shot dead a preacher and imam upon leaving a mosque after night prayers.

2 thoughts on “Terrorists Assassinate an Imam, While He Was Performing Prayers in Mosque, in Damascus Countryside”