The concept of a “Greater Israel” according to the founding father of Zionism Theodore Herzl, is a Jewish State stretching “’From the Brook of Egypt to the Euphrates.’ 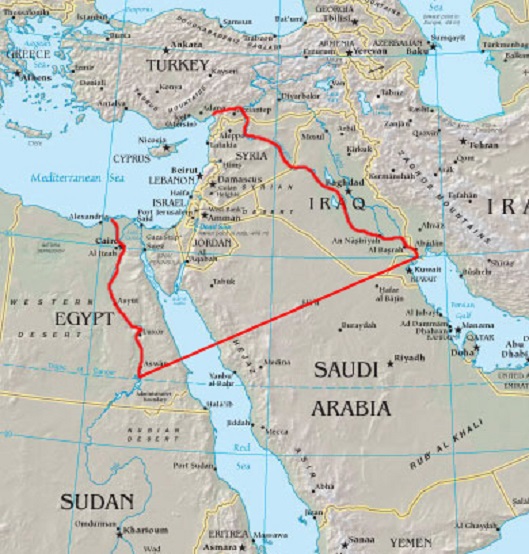 Rabbi Fischmann, of the Jewish Agency for Palestine, stated to the UN Special Committee on 9th July 1947 that:

The Promised Land extends from the River of Egypt up to the Euphrates, it includes parts of Syria and Lebanon’”, wrote Michel Chossudovsky. (1)

Thus “from the Nile to the Euphrates.” Herzl’s detailed thesis was written in 1904.

Quoted in the same article is Mahdi Darius Nazemroaya on The Yinon Plan (1982) “ … a continuation of Britain’s colonial design in the Middle East”:

“(The Yinon plan) is an Israeli strategic plan to ensure Israeli regional superiority. It insists and stipulates that Israel must reconfigure its geo-political environment through the balkanization of the surrounding Arab states into smaller and weaker states.

“Israeli strategists viewed Iraq as their biggest strategic challenge from an Arab state. This is why Iraq was outlined as the centerpiece to the balkanization of the Middle East and the Arab World. In Iraq, on the basis of the concepts of the Yinon Plan, Israeli strategists have called for the division of Iraq into a Kurdish state and two Arab states, one for Shiite Muslims and the other for Sunni Muslims. The first step towards establishing this was a war between Iraq and Iran, which the Yinon Plan discusses.”

At the time Yinon wrote, the eight year, Western driven Iran-Iraq war was into its second year – with another six grinding years of loss, tragedy and heartbreak, valleys of widows, orphans, maimed, on both sides of their common border. The toll on life and health was compared to World War 1. Iraq of course, in an historic error, had virtually been fighting a proxy war for an American regime, even then obsessed with Islam, which, in Iran they had decided was the wrong sort of Islam. What the faith of a nation thousands of miles away had to do with Capitol Hill, remains a mystery.

The day after that devastating war ended, the US replaced Iraq over the then USSR as the country which was the biggest threat to America. A devastated, war torn nation of, at the time, just under seventeen million people. (2)

Then came the dispute with Kuwait over alleged oil theft and Dinar destabilizing with the then US Ambassador April Glaspie personally giving Saddam Hussein the green light to invade should he choose. The subsequent nation paralyzing UN embargo followed, then the 2003 decimation and occupation – another orchestrated downward spiral – and tragedy and now open talk of what has been planned for decades, the break up of Iraq.

Greater Israel” requires the breaking up of the existing Arab states into small states.

“Mission accomplished” for both the US with its long planned redrawing of the Middle East and North Africa – and Israel, through whose friendship with the Iraqi Kurdish autocracy, was set to become pretty well a partner in an autonomous, independent Iraqi Kurdistan. Dream come true, from “the Nile to the Euphrates”, the final fruition of near seventy years of manipulation and aggression for domination of the entire region.

The all is also the vision of the super hawk, dreamer of destruction of nations, Lt Colonel Ralph Peters since the early 1990s. Here is his 2006 version (3.) Peters is a man whose vision of eternal war is seemingly an eternal wet dream. Here, again, for anyone unaware of the Colonel, is a repeat of that dream (US Army War College Quarterly, Summer 1997):

“There will be no peace. At any given moment for the rest of our lifetimes, there will be multiple conflicts … around the globe. Violent conflict will dominate the headlines, but cultural and economic struggles will be steadier and ultimately more decisive. (US armed forces will keep) the world safe for our economy and open to our cultural assault. To those ends, we will do a fair amount of killing.

“We have entered an age of constant conflict.”

Peters would make some of history’s most megalomaniacal expansionists look like gift offering peaceniks. His cartographic monument to arrogance: “The New Map of the Middle East Project”, of geographical restructure in far away places of which he gave less than a damn, was published in the Armed Forces Journal in June 2006.

It was surely no coincidence that on 1st May 2006 Joe Biden, long time Member of the US Senate Committee on Foreign Relations – now US Vice President of course – and Leslie Gelb, President Emeritus of the Committee, joint authored a New York Times piece (4) urging the break up of Iraq, dividing the country on ethnic lines: “ … giving each ethno-religious group – Kurd, Sunni Arab and Shiite Arab …” their own ethnic and political ghettos. Ignorance on wide inter-marriage, inter-relations, until 2003, inter-communities at every level for millennia, mixed  neighbourhoods, shared celebrations, religious festivals, joys and heartaches, boggle the imagination. The deluded article is entitled: “Unity through autonomy in Iraq.” Think non-sequeta, think mixed marriages, does the husband live in a “Sunni” ghetto and the wife a “Shia” one, for example?

“The Kurdish, Sunni and Shiite regions would each be responsible for their own domestic laws, administration and internal security.” A “five point plan” of ghettoisation, destruction, delusion and wickedness, the US-Israeli game plan for Iraq, with the UK as ever, tagging along dreaming of days of empire when, with France, Iraq and the region’s borders were imperially tinkered with just short of a hundred years ago (5.)

Aside from the shaming arrogance and illegality of the plan, ignorance is total. Clearly there is no knowledge in the great annals of the US State Department, Department of Foreign Affairs or the CIA of Iraq’s religious and ethnic minorities, also co-existing for centuries: Christians, Mandaeans, Yazidis, Turkmen, Jews, Zoroastrians, Bahai, Kakai’s, Shabaks – and indeed those who regard themselves as non-religious.

By October 2007 Joe Biden had: “attempted to create a reality when an overwhelming majority of the US Senate voted for his non-binding Resolution to divide Iraq in to three parts … (with) the Washington Post reporting that the 75-23 Senate vote was a ‘significant milestone’ ” in the severing of Iraq in to three, wrote Tom Engelhardt (6.)

Engelhardt is seemingly the only eagle eye to have picked up that: “The (tripartite) structure is spelled out in Iraq’s Constitution, but Biden would initiate local and regional diplomatic efforts to hasten its evolution.”

The Constitution, written under US imposed “Viceroy” Paul Bremer, is of course, entirely invalid, since it is illegal to re-write a Constitution under an occupation.

“Only the Kurds, eager for an independent State, welcomed the plan.”

What, ponders Engelhardt, with forensic reality, would be the reaction if Iraq, or Iran for example: “passed a non-binding Resolution to divide the United States in to semi-autonomous bio-regions?”

He concludes that: “such acts would, of course, be considered not just outrageous and insulting, but quite mad.” In Iraq however: “at best it would put an American stamp of approval on the continuing ethnic cleansing of Iraq.”

However, the US Administration’s commitment is clear, Joe Biden, a self confessed Zionist, stated at the annual J Street Conference in September 2013: “If there were not an Israel, we would have to invent one to make sure our interests were preserved.” (7) Think oil, gas, strategic aims.

Biden assured his audience that: “America’s support for Israel is unshakable, period. Period, period.” (sic) He stressed a number of times the commitment that President Obama had to Israel. His own long and deep connections, he related, stretched back to a meeting with then Prime Minister Golda Meir when he was a freshman Senator and latterly his hours spent with Prime Minister Netanyahu. The latest meeting was in January this year when he travelled to Israel to pay his respects to the late Ariel Sharon and subsequently spent two hours alone in discussion with Netanyahu.

It is surely coincidence that subsequently the rhetoric for the division of Iraq accelerated. Israel has had “military, intelligence and business ties with the Kurds since the 1960s” viewing them as “a shared buffer between Arab adversaries.”

In June Netanyahu told Tel Aviv University’s INSS think tank: “We should … support the Kurdish aspiration for independence”, after “outlining what he described as the collapse of Iraq and other Middle East regions …”(8) Iraq’s internal affairs being none of Israel’s business obviously does not occur (apart from their outrageous historic aspirations for the region in spite of being the newly arriving regional guest.) The howls of Israeli fury when even basic human rights for Palestinians in their eroded and stolen lands are suggested for the last sixty six years, however, metaphorically deafen the world.

Of course Kurdistan has now laid claim to Kirkuk, with its vast oil deposits. The plan for the Northern Iraq-Haifa pipeline, an Israeli aspiration from the time of that country’s establishment can surely also not have been far from Netanyahu’s mind. An independent Kurdistan, which indeed it has enjoyed almost entirely within Iraq, since 1992 – and immediately betrayed the Iraqi State by inviting in Israel and the CIA – would herald the planned dismemberment of Iraq.

It is darkly ironic, that whether relating to the break up of their lands or ghettoisation of those of Iraqis and Palestinians, this mirrors the plan of Adolf Eichmann, the architect of ethnic cleansing, who, after the outbreak of Word War II “arranged for Jews to be concentrated into ghettos in major cities …” he also devised plans for Jewish “reservations.”

Additionally he was an architect of forcible expulsion, one of the charges brought against him after he was captured by Israel’s Mossad and Shin Bet in Argentina in 1960. He was tried in Israel, found guilty of war crimes and hanged in 1962. Ironically his pre-Nazi employment had been as an oil salesman (9.)

Can Israel and the “international community” really be planning to mirror Eichmann by repatriating and ethnic cleansing? Will nations never look in to history’s mirror?

4 thoughts on “Ethnic Cleansing Planned in the Middle East? The Israeli Dream”