The losses (of Kiev’s army) were so huge that they were impossible to hide.

In the Donetsk region in the city of Shakhtyorsk due to powerful shelling from “Grad” of the militants against the positions of the military 21 paratrooper of the 25-th brigade from the military unit A1126 perished. In Shakhtyorsk the ‘terrorists’ shelled the ATO fighters from “Grad”: 21 dead. Photo of the Ministry of Defense of the Russian Federation.  This is announced with reference to volunteers who are currently helping the brigade and also to the military themselves by “Hromadske TV”. In particular, according to the information, the commander of the 2-nd battalion is among the dead. Besides, it is announced that due to shelling there are very many wounded among the military. Currently they are transported by helicopters into Dnepropetrovsk. “Right now I got a call on my mobile phone from the detachment of Bruno Santos. They are getting “hammered” from 4 sides with “Grads”. They said their goodbyes. They said that there is no chance. Nobody brought them anything, there were no reinforcements and no supplies”

Taking those who perished during street fighting, on checkpoints, and during the retreat from Shakhtyorsk into account (not counting the prisoners), the enemy lost up to 80-85 dead according to the most minimal estimates. The 25-th airborne brigade suffered especially high losses, which due to its specificity is certainly not supposed for street fighting in the first line.

Below there are photos of the results of fighting for Shakhtyorsk.

Some images are very graphic +18+, so beware: (we have removed the most bloody and gruesome scenes, as we consider that these images here are enough to explain the outcome of the battle) 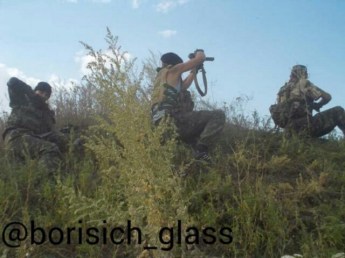 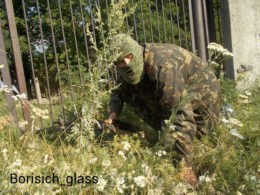 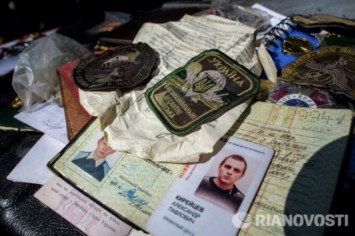 A significant portion of the photos was taken from the twitter of “Borisich” (https://twitter.com/Borisich_glass). He writes well, even though about horrible things, but with humor.

Plus the video of the interrogation of a prisoner in Shakhtyorsk:

1. What is going on in the Northern suburbs of Donetsk?
The enemy captured Avdeyevka and is accumulating forces for a strike on Yasinovataya, an offensive is expected tomorrow or the day after.

2. What’s with the cauldron?
According to the verified information right now there are ongoing negotiations about the surrender of a part of the encircled military. Up to 1500 people are ready to surrender, they request passage to the  junta territory in exchange for giving up all firearms, the remaining ammunition, and the surviving vehicles (altogether up to 60-70 vehicles, the majority without fuel, up to 30 tanks, IFV, APCs, “Grads”, there are several cannons).

3. What’s near Lutugino?
The enemy dug in in the center of the city and is pulling reserves from the North of Luhansk in order to create the group for continuing offensive operations to the West of Luhansk. The militia is concentrating forces in order to try to recapture Lutugino.

4. What’s near Marinovka?
After capturing Marinovka the enemy tried to proceed further to meet the encircled group, but was unsuccessful. Artillery fire complicates movement of enemy forces and even despite capturing Marinovka it failed to solve the strategic task of unblocking the South cauldron.

5. What’s near Saur-Mogila?
Saur-Mogila is firmly held by the militia, even though it is semi-wrapped, the attempts of an assault on the high point abut the lack of infantry and its low combat qualities. Artillery and tanks cannot compensate for this issue at the moment.

6. What’s near Shakhtyorsk?
Under Shakhtyorsk everything is OK, actually as well as under Torez and Snezhnoye, the 25-th “airborne” paratrooper brigade that broke through on July 27th suffered large losses in dead, wounded, and captured and lost its offensive capabilities. The enemy cannot pull in the reserves in this area – all reserves were already deployed in the area of Marinovka and Saur-Mogila. Therefore the enemy can’t manage here without regrouping.

7. Will they encircle Donetsk?
Because a strike through Shakhtyorsk and Debaltsevo failed, the junta will attempt to perform a near wrap, where the Northern group will perform the main strike – the nearest goal is to capture Yasinovataya with the subsequent strike on Yenakiyevo. If this plan will be enacted, then the Donetsk situation from the point of view of communications will become threatening.

8. What’s with “Vostok?”
At this moment under the banner of “Vostok” there are 3 different groups (one of which is running protection rackets in Donetsk instead of fighting a war). The name successfully turned into a brand. In the nearest time one should expect new draconian orders directed against banditism in the rear strip.

9. What’s with Borodai?
Borodai isn’t resigning for now, after completing all of his business in Moscow and Rostov he will return into Donetsk.

10. What’s near Stakhanov and Alchevsk?
The group of Mozgovoi after abandoning the Lisichansk protrusion fortified on the new positions and is performing disturbing actions in the area of Pervomaisk, Popasnaya, and to the North of Debaltsevo. The main goal is not to let the enemy gain a foothold on the captured territory with impunity (from this follows the captured and recaptured Pervomaisk and Popasnaya), and also pull a part of forces onto themselves so that the enemy cannot immediately start the offensive from Debaltsevo into the depth of the DPR. In essence, they pull a part of forces on themselves.

11. What’s with Luhansk airport?
Airport is still in blockade, the attempts to break out of are unsuccessful. 3-5 “Grad” vehicles and several mortars fire at it daily.
It is expected that if the cauldron will be done with in the nearest days then at least one battery of D-30 howitzers can be redeployed to work on the airport.

The Swedish attorney general officially recognized that what is happening in Ukraine is a war and not an “anti-terrorist operation”.