At least 10,500 people have died since the beginning of the Kiev gangsters’ military operations backed by their USA/NATO masters.

At least 10,500 people have died since the beginning of the military operation, launched by Kiev in the southeast of Ukraine in mid-April, People’s Governor of Donbas Region Pavel Gubarev said.

“We only have the approximate figures, but at least 2,000 people from our side have been killed during the conflict, 60 percent of them were civilians, others – from self-defense forces,”

Gubarev added that each shelling takes the lives of dozens of civilians as they are less mobile than the militia and suffer the most.
The governor estimated Ukrainian Army and National Guard losses at 8,000 people.

Gubarev also stated that Ukrainian authorities are downgrading the army losses, classifying the dead soldiers as missing in action.

On July 30, the head of the Committee of Soldiers’ Mothers of Donbas said the Ukrainian Army has been lowering the death toll in the operation against the militia in eastern Ukraine by listing dead soldiers as defectors in order to avoid paying compensation to their families.

Semen Semenchenko, the chief of the Donbas battalion, said earlier that up to eight Kiev-backed soldiers are lost daily in the operation in the country’s east. The Donbas militia said Kiev lost 1,600 soldiers over July 9-15.

Kiev has launched a special military operation to suppress independence supporters in the southeastern Ukrainian region of Donbass, following their refusal to recognize the legitimacy of the coup-imposed government.

The fighting intensified dramatically after Luhansk and Donetsk regions proclaimed themselves independent republics and started to form their own governments.

According to a UN report, the ongoing conflict claimed the lives of 1,129 civilians from mid-April through July 26, with about 3,442 injured.

Moscow has repeatedly urged Kiev to stop the bloodshed. 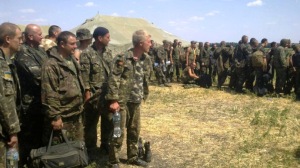 Over 400 Ukrainian troops cross into Russia for refuge

More than 400 Ukrainian troops have been allowed to cross into Russia after requesting sanctuary. It’s the largest, but not the first, case of desertion into Russia by Ukrainian soldiers involved in Kiev’s military crackdown in the east of the country.

According to the Rostov Region’s border guard spokesman Vasily Malaev, a total of 438 soldiers, including 164 Ukrainian border guards, have been allowed into Russia on Sunday night.

One of the Ukrainians was seriously injured on his arrival in Russia. He was taken to the hospital for surgery, the officials added.

The other Ukrainian soldiers have been housed in a tent camp deployed near the checkpoint via which they entered Russian territory. The Russian border guards are providing them with food and bedding.

Footage taken by the Russian media at the scene showed the Ukrainian soldiers being handed ration packs and resting in their temporary shelter. Those who agreed to speak on camera said they were relieved to be in safety for the first time in weeks.

“We were given an order to leave out positions and go to Russia trough a corridor. We were told it would be safe. Of course they, I would say, made us go fast from behind,” one of the soldiers, a BMP driver who would not reveal his name or even show his face on camera, said.

“It was so bad back there. Hot, and so many deaths and bad things,” another one, Dmitry, said. “Folks can rest here. They gave us a chance to wash, gave us new clothes. We are thankful.”

“We have been in those fields for more than six months and are very tired,” he added.

Another one, Yaroslav, said he wishes to go back to his family in Ukraine.

“I want to do something peaceful. My contract expired four months ago,” he explained.

On Sunday, the Ukrainian anti-government militia reported that it was in negotiations with a large contingent of Ukrainian troops they encircled in Lugansk region on a possible surrender. The negotiations were being hampered by the troops’ intention to destroy some 70 armored vehicles in their possession before laying down arms, which the militia wanted to capture intact.

The Gukovo border checkpoint, through which the Ukrainian troops crossed into the Russian territory, is located on Russia’s border with the Lugansk Region of Ukraine, indicating that these are the same troops that were negotiating with the militia. If so, it was not immediately clear whether the vehicles they had were really destroyed.

The flow of deserters from the ranks of Ukrainian Army and National Guard seems to be increasing amid the escalating violence in Donets and Lugansk Regions, where Kiev is fighting against armed anti-government militias.

In late July 41 Ukrainian troops fled to Russia to escape fighting in eastern Ukraine. They are now being prosecuted in Ukraine for deserting in the heat of battle.

Several Ukrainian units have been reported to recently to be cut off from supply lines after attempted offensive operations, which brought them behind the militia-controlled territories and close to the Russian border.

The Ukrainian troops, while far superior to the militia in terms of heavy weapons, suffer from poor logistics. Many soldiers complain about lacking even basic supplies like food and water on the frontline. The situation is aggravated by cases of apparent negligence from the command, with units being supplied with faulty equipment, coming under friendly fire and simply left behind while retreating from militia counter-attacks.

A YouTube video allegedly shows a Ukrainian soldier explaining how he has to catch and cook snakes because his unit receives no rations.

This causes serious morale problems in the army, with more critical voices saying the Ukraine de facto has no infantry troops and has no other way to fight but by leveling militia-held cities to the ground with artillery and air strikes.

There is a growing resistance to the military campaign among Ukrainian population, with several cases of mass protests against the latest mobilization drive, as mothers and wives of conscripts took to the streets to demand that their loved once not be drafted into the army.

Twelve more members of the Army of Ukraine came to the frontier point of the Russian-Ukrainian border in the Rostov region and asked for cover.

Among the 12 men who came to the checkpoint “Gukovo”, there are officers and enlisted men. They went through the neutral zone on the border with a white flag and without weapons.

DPR militias continue to fight in the area Shakhtersk, Snezhnoe and Torez with the 25th airmobile brigade of the Armed Forces of Ukraine and the battalion “Dnepr-1”. The enemy is almost surrounded, said the militia headquarters. The hight Saur-Grave remains under people’s militia control, it hold units of the battalion “Vostok”.

Trust between the West and Russia “is doubtlessly undermined seriously,” the German foreign minister said in an interview with German Sunday edition Frankfurter Allgemeine Sonntagszeitung published on Sunday. However, this should be realised that “without co-operation with Moscow this is hardly possible to reach a political solution in Ukrainian conflict,” he said. 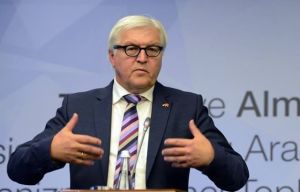 Commenting on EU sectoral sanctions imposed on Russia, the minister added that EU states had different histories of co-operation with Russia “which determines their relations with Russia also in different ways.” Moscow may take retaliatory measures, therefore, “no one should be surprised that sanctions will take some costs.”

The Malaysia Airlines Boeing 777 airliner’s crash in Ukraine’s Donetsk region on July 17 has changed the situation dramatically, the German minister said. “But fury and indignation cannot and should not be the last say in foreign policy,” Steinmeier added.

From today, the people of Ukraine will cover military operations in the east of his own pocket

Citizens of Ukraine must now transfer part of their income to fund insurgency operations in the east of the country. Authorities imposed a so-called “war tax” to the population. Also, the Ukrainian government has made budget redistribution in order to seek additional hundreds of millions of dollars on military operations.

Television broadcast was interrupted in eastern Ukrainian city of Donetsk due to Ukrainian army’s artillery shelling of the city, a representative from Donetsk People’s Republic’s television and radio committee told RIA Novosti.

“Ukrainian aviation carried out an artillery assault against the power station in Mandrykyne [southern suburb of Donetsk.] The power station was severely damaged, another 220 stations went down shortly after. One of them powered TV aerial in the Petrovsky district of Donetsk. As a result, TV broadcast stopped in Donetsk, as well as the broadcast of 70 percent of radio stations,” the committee’s representative told RIA Novosti.

On Saturday, at least three people were killed in artillery shelling in the Petrovsky district of Donetsk. The shells hit a school and a local power station.

SOURCES of Videos & News from :

US Coup in Ukraine