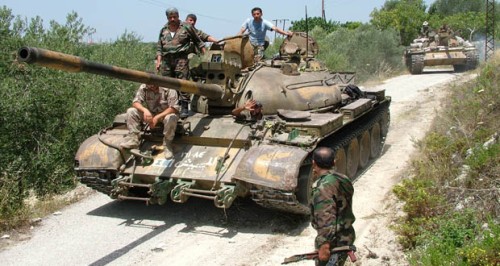 The Syrian Arab Army killed on Tuesday the al-Nusra commander in al-Zabadani and another terrorist commander in Qalamoun area, in the context of its anti-terrorists operations across the country.

The Syrian military launched large-scale operations in  Hamah, Idleb, Daraa, Aleppo, Homs and Damascus, killing dozens of terrorists including many Saudis and Libyans.

Iraqi security forces killed dozens of Takfiri mercenaries, including a notorious Daesh-IS commander, in the Western parts of Iraq.

Nabhan Hamid Jabar Al-Jamili, a senior commander of Daesh-ISIL, the Islamic State of (Apes) of Iraq and the Levant, was killed in Al-Karameh region of Al-Anbar province in Western Iraq on Sunday.

Al-Jamili and his gangsters had claimed responsibility for the raping 60 teenage girls in Al-Sabihat, Al-Lahib and Albu Khanfar villages in Al-Karameh region, Al-Youm Al-Samen news website quoted an Iraqi security official as saying on Sunday.

Meantime, a local official said that more than 74 Daesh-ISIL terrorists have been killed in Touz Khormatu, Fallujah and Mosul over the past 24 hours.

On Saturday, the Iraqi air force destroyed an ISIL convoy of 18 vehicles in Anbar, killing all the terrorists inside the vehicles.

The Iraqi air force destroyed the vehicles in Ana and Hadetha areas of Anbar province.

“All of the terrorists, who were inside the vehicles have been killed as well,” a security source said.

Daesh-IS terrorists have fled the battlefield in the western parts of Kirkuk, local media reported.

“The ISIL terrorists fled the area (Western Kirkuk) for an unknown place and have left behind their weapons,” ‘Shafaq News’ website quoted informed sources and eyewitnesses as saying on Sunday.

A commander of the Awakening Forces said his forces have informed him that around 100 Daesh-ISIL Zihadist* mercenaries have fled Al-Zouyeh village in Beiji region of Salahuddin province and al-Zab area in Southwestern Kirkuk, near Beiji refinery, and left their military tools and weapons behind.

Kirkuk is a city in the north of Iraq, 236 kilometers North of Baghdad, and 83 kilometers (52 miles) South of Erbil.

Kirkuk lies in a wide zone with an enormously diverse population, which has moreover experienced dramatic demographic changes in the course of the twentieth century.

The so called ‘Islamic State of the Iraq and the Levant’, better known between the local people as as ‘Daesh’, is a mercenary terrorist group (CIA/Mossad directed) which proclaimed caliphate status.

The group has been officially designated as a foreign terrorist organization by the United Nations Security Council and most world countries.