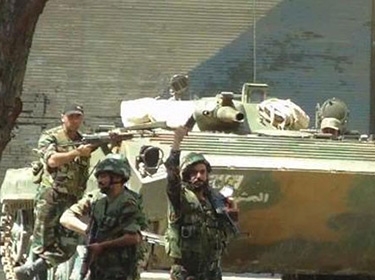 Syrian Army units on Thursday continued to tighten their grip on terrorists in a number of areas across Syria where many terrorists were killed and injured and their equipment was destroyed.

The source added that an army unit killed a number of terrorists while they were trying to infiltrate al-Shaer gas field in Homs countryside, destroying three cars equipped with heavy machineguns.

The Army units also eliminated a number of terrorists in the southern countryside of Damascus and Quneitra.

Army units targeted terrorists’ gatherings in Daraa and its countryside and destroyed their vehicles, weapons, and ammunition.

The army killed a number of terrorists and injured others when targeting their hideouts and gatherings to the north of the old Customs building, to the west of al-Sa’eliyeh reservoir in al-Yarmouk district, and around Um al-Daraj tank in Daraa al-Balad.

The army units also destroyed terrorists’ vehicles with all the terrorists on board, killing others in the villages of Inkhel, Khirbet al-Mutawaq and Tal al-Mutawaq al-Kabir in Daraa countryside.

Units of the armed forces killed and wounded many terrorists in several neighborhoods of Aleppo and its countryside, destroying a number of their vehicles.

Units of the armed forces eliminated a number of terrorists and destroyed their vehicles after targeting their gatherings in the Free Zone, Um al-Qura, Abla, al-Busha, al-Sahhara, al-Inzarat, Bab al-Hadid, al-Sakhour neighborhood, al-Mansoura, al-Sakan al-Shababi, and in the farms of al-Mallah, al-Liyramoun, Hritan and in al-Na’na’ai in Aleppo and its countryside.

Terrorists were also eliminated in the surrounding of al-Salihin roundabout in Aleppo, while two of their cars equipped with heavy machineguns were destroyed and all terrorists inside them were killed. 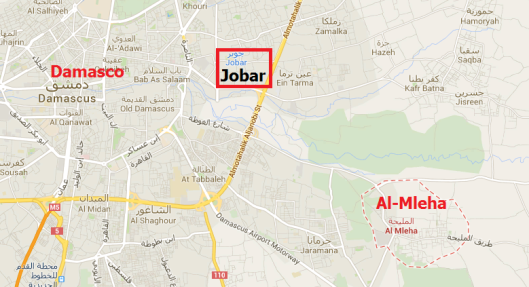 A child killed, citizens injured by terrorist attacks in Damascus and Sweida

A child was killed and a number of citizens were injured by a terrorist mortar attack in Jaramana city in Damascus Countryside.

A source at the Police command told SANA that two mortar shells, fired by terrorists, fell on the area surrounding al-Seyiuf Square and Municipality building, claiming a life of a child and injuring three others, causing material damage to a number of shops and cars.

A source at the Police command told SANA reporter that terrorists, who were driving motorcycles opened fire on a bus for transporting passengers in Dama village between Daraa and Sweida provinces, injuring five citizens.

The injured citizens were admitted to the National Hospital in Sweida for treatment.

A house and 2 cars were damaged in a terrorist mortar attack on the residential area of  Ruken Eddin in Damascus on Wednesday.

A source at Damascus Police Command told SANA that terrorists fired a mortar shell on a house in residential building near Ibn al-Nafis Bakery in Ruken Eddin area, causing material damage to the house and 2 cars, but no casualties were reported.

Terrorists also  targeted the neighborhoods of al-Abbasieen, al-Amarah and East of al-Tejarah with several mortar shells, killing a child and injuring 7 other citizens, among them a girl.

The terrorist attack caused material damage to 3 houses and a number of cars.

Meanwhile, many citizens were killed and scores others were injured, most of them children and women, in a series of terrorist attacks on Damascus neighborhoods.