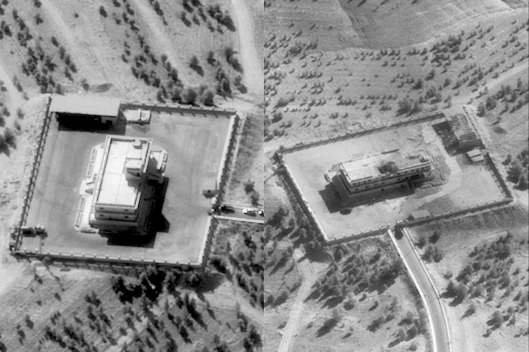 Pictures show an IS Command and Control Centre in Syria before (L) and after it was struck by bombs dropped by a US F-22 fighter jet. This was the first time an F-22 was used in a combat role (Reuters)

If you click on the photo to enlarge it, in fact you see that before the bombing there is no sign of life, no people, no movement, no cars or vehicles, just a truck in a corner: are these photos credible? Do you think are those of a headquarters or strategic locations, as a Command and Control Centre for Daash-ISIL terrorists? We believe it is a fake.

US Bombed ‘Empty Buildings’ in Airstrikes on ISIL in Syria

The US fanfare surrounding Washington’s bombing raid over Syria was immense. With all the hype, you’d have thought that it was a new Pearl Harbor.

With a risk of popping President Obama and the US State Department’s bubble, we need to ask: did the US bomb a load of empty buildings in Syria on Tuesday? 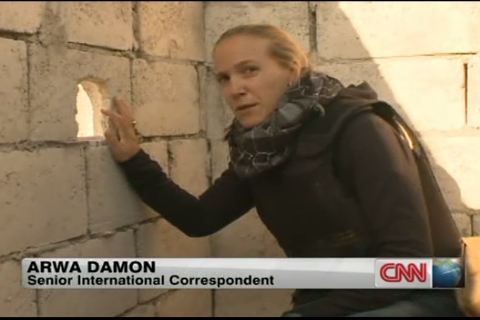 According CNN Middle East correspondent Arwa Damon (photo, above), residents from the town of Raqqa, in northeastern Syria had “mixed reactions to US strikes”. The reason given was a real shocker:

Damon revealed on air early Wednesday that ISIL terrorists who were held up in the town may have been tipped off weeks in advance to the US airstrikes on Tuesday.

“15-20 days before the airstrikes, (ISIL) buildings were evacuated, and fighters then mixed in with the local population”.

Maybe Damon let the truth slip out by accident, or maybe she was trying to do what US journalists so often are not allowed to do by challenging Washington’s prefabricated narrative. Regardless, CNN’s chief war enthusiast Wolf Blitzer did not feel the need to pursue the point.

This surprising admission by CNN would mean that the US military may have only destroyed empty buildings in Raqqa, and that Washington’s inflated claims of dead ISIL fighters are probably exaggerated.

In other words, it was all a big show, and ISIL’s capabilities were not degraded at all by Obama’s celebrated US blitzkrieg in Syria.

EMPTY BUILDINGS: CNN’s report suggest a hollow victory by US on Tuesday.

CENTCOM Has a Leak

If ISIS/ISIL operatives did indeed have advanced warning of US airstrikes in Syria – as this CNN report definitely suggests, then we also have to ask, where was the leak?

The most likely source of a leak would be from US CENTCOM located in Doha, Qatar.

The other possibility is that ISIS/ISIL financial sponsors in Saudi Arabia and Qatar had received word of the coming US operation and were instructed to vacate any potential targets.

No Chance of Transparency

Many military experts have questioned the US airstrikes as ‘ineffective’ because targeting static venues will not deter ISIS/ISIL, and these latest revelations will only reinforce that skepticism.

So how much can the public trust US reports of its own bombing campaigns? As far as gathering and verifying intelligence goes, how can we know if  US operatives knew who was where? Usually Washington can say anything and the mainstream press will not question it.

If you are a bona fide intelligence analyst, it can’t be easy – with political busy bodies and State Department geniuses revising their work, and then going back to the intelligence community asking for ‘authentification’ of various Tweets and ‘very chilling’ YouTube videos the White House has scraped-up off the web. As a result, assessments are often conflicting, and patchy – a running mess by anyone’s account.

Given that Washington DC has a diabolical no track record of being highly politicized when it comes to ‘intelligence’, it’s hard swallow anything coming out of Pennsylvania Ave.

At the end of the day, they tell us what they want us to hear.