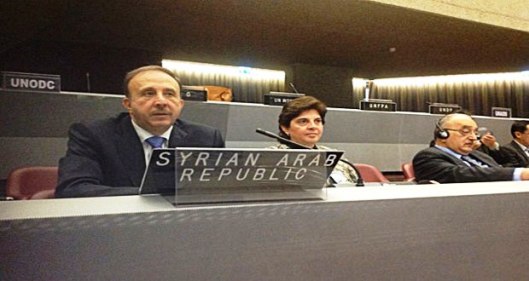 Geneva, 14/10/2014 – Speaker of the People’s Assembly Mohammad Jihad al-Laham warned that any act of training or arming the “opposition” in Syria under whatever names would be “a violation of the international law.”

Addressing the 131st General Assembly of the Inter-Parliamentary Union (IPU), al-Laham dismissed such acts as “an attempt to reproduce armed groups in a different form with the aim to fan the flames of violence in Syria.”

This “portends continuous chaos and a long-term terrorist war which would give birth to new ‘ISISs’ that are dangerous to the region and the world,” al-Laham cautioned, referring to the terrorist organization of the Islamic State of Iraq and Syria whose threat has recently spread widely.

There have been proposals recently by the newly forged US-led international alliance against ISIS to conduct training and supply arms to so-called “moderate opposition” in Syria with the excuse of fighting the terrorist organization.

While slamming the world countries’ response to Syria’s warnings since the outset of the crisis of a spreading international takfiri terrorism “that have fallen on deaf ears”, al-Laham said the facts on the ground have now proved right Syria’s cautions, with those countries “have suddenly woken up to the fact that most of the fighters they have been supporting in Syria are members of ISIS and Jabhat al-Nusra.”

He called for moving quickly to “put the international alliance against terrorism on the right track” by expanding it to include all countries of the world, including the Syrian government, reaffirming that Syria has all along announced its readiness for cooperation with any international counterterrorism effort as long as it is in the line of the international law and the Security Council’s relevant resolutions.

He slammed the U.S. adminitration for having formed the alliance in violation of the Security Council’s resolution no. 2170 on counterterrorism and outside the frame of the Council.

The alliance, al-Laham said, has excluded countries like Russia, China, Iran and Syria contrary to the resolution which stressed that terrorism cannot be defeated except through a diligent and comprehensive approach that involves the participation and effective cooperation of all countries and international and regional organizations

He wondered “Is there any item in resolution 2170 or in the UN Charter that allows a country to train armed groups under the name of ‘moderate opposition’ to fight the Syrian Arab Army?”

Al-Laham affirmed that combating terrorism starts with confronting the takfiri extremist thinking and implementing the Security Council’s resolutions on counter-terrorism and cooperating with the countries that are hardest hit by terrorism.

“Syria is fighting terrorism on behalf of the whole world, and whoever is keen to back it must support it in combating terrorism and in the reconciliation efforts the Syrian government is making in volatile areas,” all-Laham stressed.

The IPU General Assembly, which has brought together delegations from 141 countries and runs through October 16, discusses the means to contribute to facing the growing dangers posed to the international peace and security, including issues related to combating terrorism, protecting the Palestinians’ rights and violence against women.

Al-Laham met a number of parliament speakers on the sidelines of the meetings where discussions concentrated on means of boosting parliamentary relations to solve conflicts, combat terrorism and consolidate language of dialogue and mutual respect.

Meeting Secretary General of the International Parliamentary Union Martin Chungong, al-Laham underlined the importance of the Union to play an active role in tackling the arising international issues, particularly terrorism to which Syria and Iraq are exposed, through finding a global environment that puts an end to the spread of takfiri mentality.

The two sides called on the US-led coalition which fights ISIS to commit to the international law and Security Council relevant resolutions to respect the states’ sovereignty.

In this regard, Speaker of People’s Assembly met his Algerian counterpart Abdul-Kader Bin Salih and Pakistani counterpart Sayyed Hussein Bukhari, discussing with them bilateral relations and means of coordinating efforts to combat terrorism and extremism.