We have no esteem for Human Rights Watch, which we consider a tool of the USA regime, and that since the war of aggression against Libya has acted in a shameful way to endorse the lies of the propaganda for the “humanitarian war”, but the testimonies contained in this video deserve to be published.
(SFP/patriots) 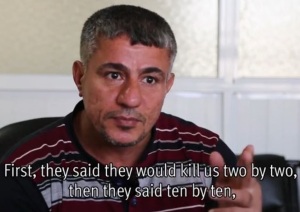 Gunmen from the Sunni extremist group Islamic State systematically executed some 600 male inmates from a prison outside the northern Iraqi city of Mosul on June 10, 2014, according to survivors’ accounts. The vast majority of those killed were Shia.