The United States in bed with DAESH-Is Supporters 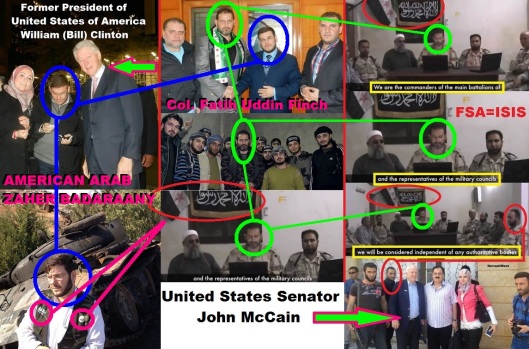 If you think the United States Government (be it Republicans or Democrats), doesnt have its hands deep in the creation of ISIS (Islamic State in Syria), then you have failed to do the research into the TRUTH that you should have.

Former United States President William (Bill) Clinton is shown in the picture above with the American Arab Zaher Badaraany, the man who claims to be President of the Syrian Future Movement. (Located in Turkey). The US claims to be fighting ISIS but in fact, top officials in the US government are knee deep, as you can see. Senator McCains photo ops have been much more publicized. 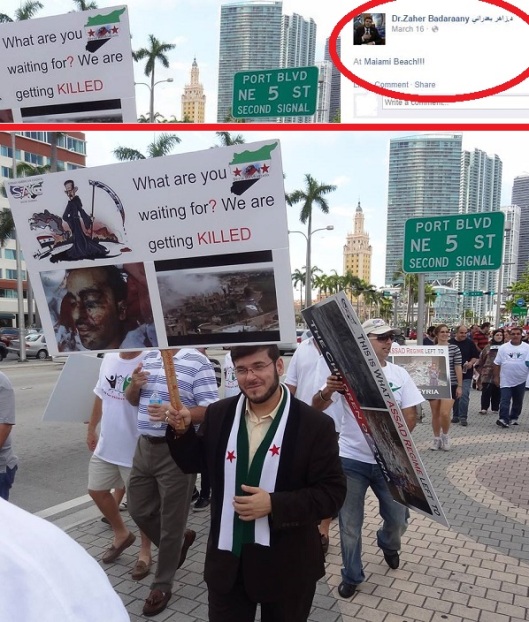 Mahir isa Lazkani aka Maher Issa Abu Jalal also works with the Americans. August 2013, he was involved in staging a fake chemical weapons attack, along with Fahed Awad. Known to the entire world, yet denied by the US (despite the United States own study from MIT, testimony from Carla Del Ponte, testimonies from Syrians themselves, and countless other proof, including my own), and all the west.

When the chemical weapons false flag didnt work to rally support, the United States had to step up its game. This, the faked beheading videos that dont actually show the beheading like the prideful ISIS likes to do. Youtube had many of them. The new scary boogyman is ISIS.

The US has created wars all over the Middle East, with the help of the US taxpayers, Qatar, and Saudis endless petro dollar. Turkey, being humiliated and denied entry into the EU could be one of the reasons it plays as a major role FOR the west. Just like the child who wishes to hang out with the popular kids at school, yet denied. “Maybe if I cooperate, and be the good puppet like they want me too, I can become one of them.” The role of Erdogan to Syria is a shame to Turkey, and all those who have to live under him.

I believe the US has quite a few “CIA assets” working for them. Like the so called Saudi 911 bombers (who were blamed, but not used since one is still a pilot in Saudi). They are the major players in the social arena working to sway public opinion to situations where masses dont dont have a clue to the truth, like in the west.

I believe another CIA asset is an American fireman from Wayne New Jersey named Racan Alhoch who claims to be from Syria, but I doubt it.

The fire station American Racan Alhoch works from. This is a screen shot from his facebook account which has since been deleted. Below, you will see him as a fire fighter.

Pictured here is Racan Alhoch with his (unknown), buddy Ahmad in Syria. As you can tell by the weapons they both carry, he is certainly an “activist” (aka terrorists to the Syrian people), as he claims in this description below he wrote about himself (and his buddies Matthew VanDyke and Sharrief (Layth) alMidani (not pictured). 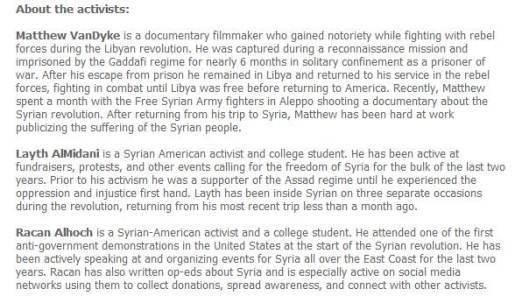 Since I saw former President Bill Clinton pictured with these thugs who have been trying to oust the Syrian president Bashar al-Assad so they can place the US puppets in his place, I began to dig a bit deeper. What did I find?

The blood soaked Hillary Clinton with her this time, “Libyan Freedom Fighters.”

Pictured as a “Libyan freedom fighter” when Hillary Clinton visited a hospital in Tripoli just before the assassination of Muammar Gaddifi a few days later. I guess the United States even provides its own “freedom Fighters.” Reuters wrote (under this photo): 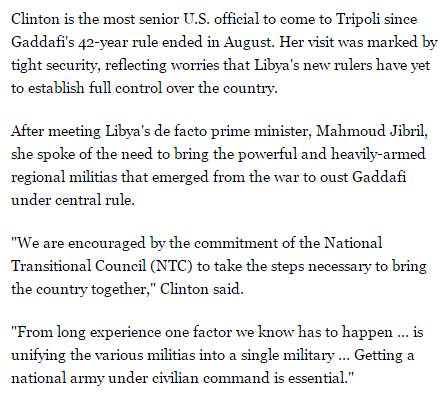 “Getting a national army under civilian command is essential” is an under statement. What she fails to say is that the United States will provide those fighters as well.

Also found on Racan Alhoch facebook of prideful photos was this one:

Trying to look a bit more distinguished by cleaning up his facial hair and adding glasses, he poses with the Libyan rep to the UN ambassador Ibrahim O. Dabbashi and his mother (another American in this fake group of Syrians working night and day to oust the Syrian president). Below is Matthew VanDyke with the ambassador.

Here is Racan Alhoch starring in his own video (a bit retarded if you ask me), making fun of the Syrians who support their president from the safety of the United States.

Not so long ago, it was pretty easy to cover lies. There was no internet, let alone social media. Not the case now. Everything done by anyone, including government officials will be outed, eventually anyway. The west, and in particular the United States is dripping with the blood of Iraqis, Libyans and Syrians all over their hands. They chose to play ball with the most fake Muslims in the entire Middle East Qatar and Saudi. You know, the ones who say, “No Christian should be buried in Arab lands.”

It seems a charity inspired by Sharrief (Layth) al Midani called “The Amal Project” has suffered losses due to Racan Alhoch, at least thats what Layth claims. He has posted this to his facebook page:

This is EXACTLY why one should do all the research possible before they invest one cent in these charities people claim is for “the Syrian people.” Below is one of the pages Sharrief posted to his facebook page. You can clearly see NOT ONE CENT was used to help the people of Syria, but was used for personal reasons, including pornography.

Again, I will emphasize, you cannot hide your activities. Be a former President of the United States, or a “moderate rebel” in Syria from the United States. Your illegal activities just may be investigated and exposed where you least expect it.

If you want to see all the reports and posts to Sharriefs facebook page, please click the following link: