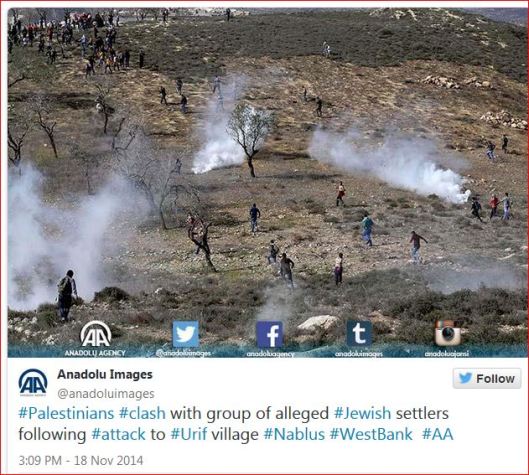 The IOF troops (Israeli Occupation Forces, SFP note) did nothing to stop Israeli settlers from attacking Palestinian villagers, according to videos released by the Yesh Din rights group, showing soldiers pointing guns at Palestinians while Israelis are throwing stones from behind their backs.

In the 3 amateur videos released by the Yesh Din human rights group, the IOF soldiers appear to be protecting the masked Jewish settlers from Yitzhar during their confrontation with Palestinians in the village of Urif in the West Bankon Tuesday.

“IDF (Israeli Defence Forces, SFP note) soldiers have the obligation, based on international law and High Court of Justice rulings, to protect Palestinian residents from violence, and IDF soldiers have the authority to detain suspects, including Israeli suspects, until the police arrive,” Yesh Din said in a statement.

The footage shows at least 5 armed IOF soldiers standing amongst the settlers and at times pointing guns at the Palestinians.

“The disturbing video footage demands vigorous investigation and the immediate prosecution of the soldiers involved. An examination must also be carried out of whether the soldiers’ commanders bear liability for the conduct of their subordinates,” attorney Emily Schaeffer Omer-Man, legal advisor to Yesh Din’s said.

The Israeli settlers’ attack on Palestinians reportedly took place just hours after a deadly attack on a synagogue in Jerusalem which killed 5 Israelis.

According to the IOF around 200 Palestinians engaged some 50 settlers by throwing stones in an area between the settlement of Yitzhar and the Palestinian village of Urif, Haaretz reports. The army said the confrontation started before the soldiers arrived and had to use gas canisters to disperse the youths – something the videos cannot confirm.

The IOF said there were no injuries, but Yesh Din claims that a 13-year-old boy suffered a light head wound. The boy was reportedly treated at Rafidia Hospital in Nablus.