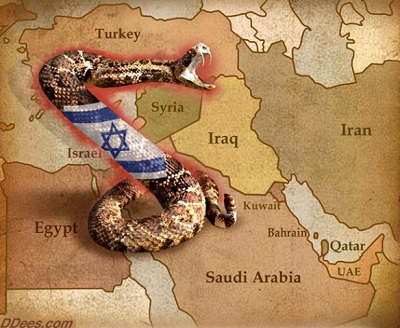 Russia Today, 8/12/2014 – Syrian officials demanded the UN impose sanctions on Israel after Tel Aviv conducted airstrikes near Damascus Airport. They say the attack was a heinous crime against their sovereignty by a country which doesn’t hide its policy of supporting terrorism.

The attack aimed to support armed terrorist groups in Syria, especially after Damascus made some progress in the cities of Deir Ezzor, Aleppo and Daraa, say Syrian officials.

The Syrian Foreign Ministry called for UN officials to impose sanctions on Israel, whose authorities “don’t hide their policies in supporting terrorism.” Damascus also urged UN to take all necessary procedures to prevent Israel from repeating such attacks in accord with UN Charter.

The letter asserts that Israel is trying to divert the world’s attention from the collapse of its own coalition government, which continues “its occupation of the Arab territories and violates the international legitimacy.”

Despite the Israeli attacks, Damascus will not stop its efforts to combat terrorism in all its forms, types and tools and on Syrian soil, added the letter. 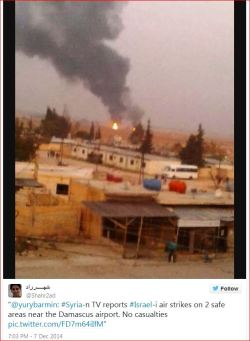 n Sunday, Syrian state TV reported that Israeli army hit targets near Damascus Airport and in the town of Dimas near the Lebanese border.

“The Israeli enemy committed aggression against Syria by targeting two safe areas in Damascus province, in all of Dimas and near the Damascus International Airport,” the report said, adding that there were no casualties.

These weapons, considered to be “capable of tilting the strategic balance,” especially threaten Israel’s ability to act freely in airspace of Lebanon, says a report published in pro-Hezbollah Al-Akhbar newspaper. 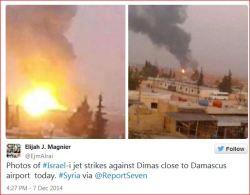 Israeli authorities have neither denied nor confirmed the attack.

The UN hasn’t yet commented on Israeli airstrikes in Syria either, saying there is no “first-hand” information.

“We don’t have first-hand information to confirm. We will try to find more details, but now we have no comments,” Deputy Spokesman for UN Secretary-General, Farhan Haq, told TASS. 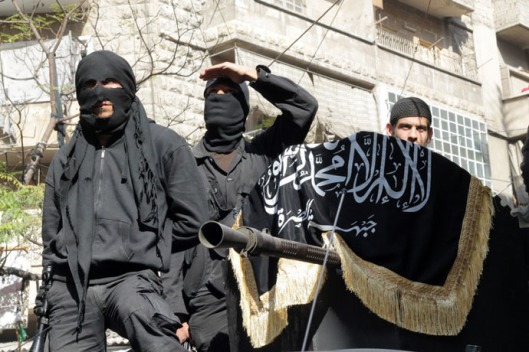 Israeli occupation forces have kept steady contacts with the terrorist gangs in Syria over the past 18 months, mainly treating wounded fighters but possibly supplying them with arms, UN observers at the Israeli-Syrian border reported.

In a series of reports to the UN Security Council by the United Nations Disengagement Observer Force (UNDOF), there are a number of documented instances (March 2013 – December 2014) of Israeli Defense Forces’ (IDF) dealings with “armed members of the opposition” on the Israeli-Syrian border of the Golan Heights.

The reports do not distinguish various Syrian militants fighting against President Bashar Assad, which range from West-supported Free Syrian Army to the radical Islamists of the Islamic State, formerly known as ISIS.

“UNDOF sporadically observed armed members of the opposition interacting with IDF across the ceasefire line in the vicinity of United Nations position 85,” the most recent report reads.

The October 27 report states two unknown people entered Israel from the Syrian side of the border after two IDF soldiers had opened a gate, allowing them in. That same report also details the IDF’s incursion into Syrian territory to set up tents for 60-70 families some 300 meters from the Israeli side.

Israeli newspaper Haaretz explains that in September, Damascus had sent a letter of complaint to UNDOF, claiming that the camp was a“base” for “armed terrorists,”and would be seen as a legitimate target for military engagement unless demolished by Israel.

Prior to that, a report issued June 10, 2014 to the UNSC said UN observers witnessed IDF soldiers handing two boxes with unknown contents to Syrian ‘rebels’ on the Syrian side of the border.

The timing of the incidents corresponds with the withdrawal of most UN troops from the Syrian to the Israeli sector of the buffer zone in September after Al-Qaeda-linked fighters kidnapped dozens of peacekeepers.

Stretching for 70 kilometers from Lebanon to Jordan, Israel seized the Golan Heights from Syria during the 1967 Six-Day War. Syria unsuccessfully tried to retake the Golan Heights during the 1973 Yom Kippur War. The two countries signed an armistice in 1974 and a UN observer force has been in place on the ceasefire line since then.

Most documented exchanges between IDF and Syrian militants are humanitarian in nature and show the Jewish state treating wounded arriving from the Syrian side. 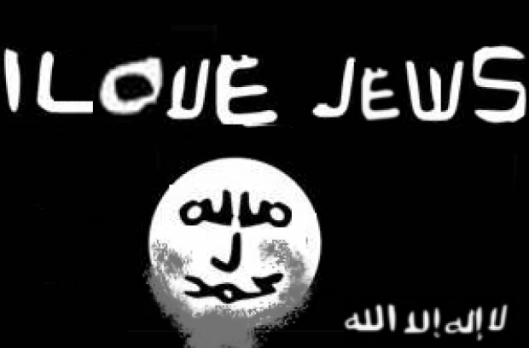 For instance, the June 10, 2014 report accounts 59 incidents at Position 85 where UN team “observed armed members of the opposition transferring 89 wounded persons from the Bravo side across the ceasefire line to IDF and IDF on the Alpha side handing over 19 treated and 2 deceased individuals to the armed members of the opposition on the Bravo side.”

Israel’s Ministry of Health indicated that Israel treated about 1,000 Syrians at four hospitals in the north of Israel, among them fighters from the Free Syrian Army, Israeli news site i24news.tv reported.

The IDF, when reached by i24 confirmed that, “in the past two years Israeli Defense Forces have been engaged in humanitarian, life-saving aid to wounded Syrians, irrespective of their identity.”