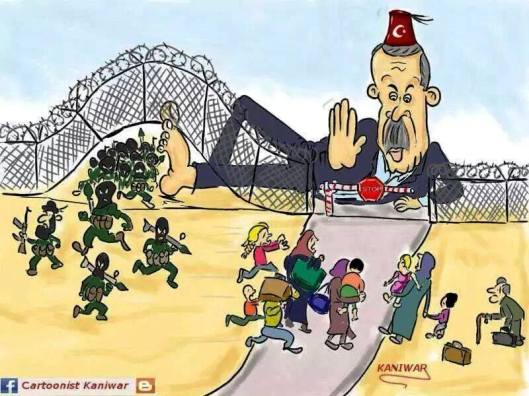 SANA, 12/1/2015 ~ A source at the Syrian Foreign and Expatriates Ministry said that the confirmation by Turkish Foreign Minister Mevlut Cavusoglu that terrorist Hayat Boumeddiene entered Turkey on Jan/2 and crossed into Syria on Jan/8 constitutes a clear official confession that Turkey is still a main route for foreign terrorists to infiltrate into Syria and return to their countries in blatant violation of UNSC resolutions 2170 and 2178 on counterterrorism.

Boumeddiene is the wife of terrorist Amedi Coulibaly who was killed during the release of hostages he had been holding in a supermarket in Paris. She is wanted by the French authorities who described her as “armed and dangerous.”

The ease with which terrorists move through the Turkish territories reaffirms the involvement of the Turkish government with the armed terrorist groups and makes Turkey a direct partner in shedding the blood of innocents in Syria and all over the world.

The Syrian Foreign Ministry said that Syria calls upon the international community to take effective actions and put an end to the destructive Turkish policy which is directly responsible for the growth of takfiri terrorist activity in the region.

A source at the Syrian Foreign Ministry also called for putting into effect all mechanisms provided by the UNSC resolutions to stop supporting terrorism and deal with the phenomenon of foreign fighters.