Deir Ezzor, 15/1/2015 ~ Members of terrorist Daesh gangs (ISIS) killed eleven civilians in the eastern countryside of Deir Ezzor province and mutilated their bodies on charges of “apostasy and fighting Daesh-IS.

The reporter quoted the sources as saying that Daesh-IS gangs also shot dead Hamed Ali al-Mohammad and Hamed al-Tneika and crucified them in the square of al-Shheil village, 50 km away from Deir Ezzor city. 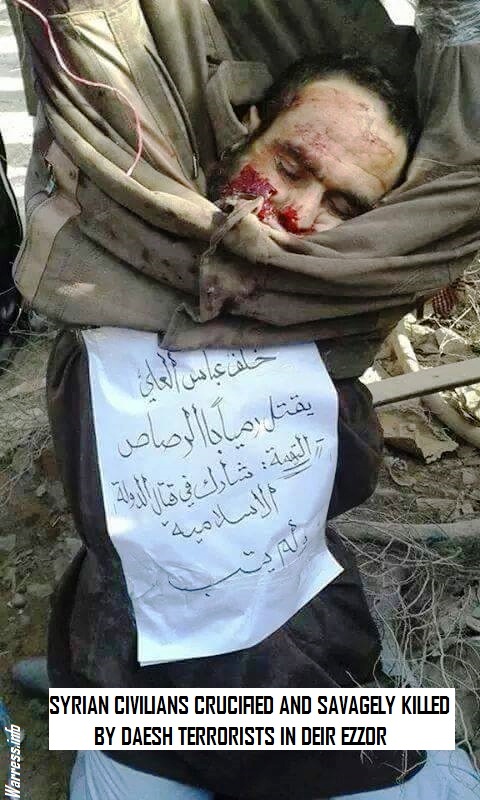 A day ago, Daesh-IS terrorists killed 3 other civilians in al-Mayadeen city in the eastern countryside of Deir Ezzor.

The local sources also confirmed that Daesh-IS terrorists mutilated the bodies of As’ad Mohammad al-Assaf and Mohammad Yassin al-Hamad after shooting them dead and beheaded Ahmad Mostafa Ali al-Turki.
All three victims were later crucified at al-Bal’oum roundabout at the entrance of the city.

In al-Jurzi village in the countryside of al-Mayadeen, Daesh-IS terrorists shot dead Khalaf Abbass al-Ali and crucified him in the village’s square, according to the sources. 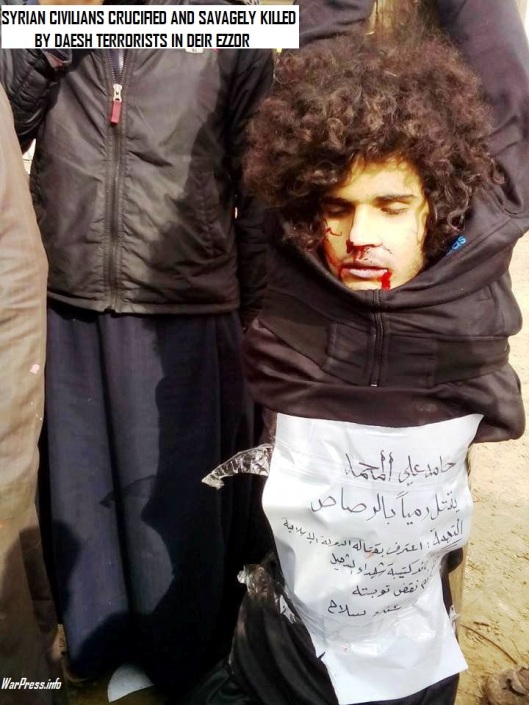 The civilian Sami Ahmad al-Khalaf was also killed and crucified by Daesh-IS gangs in al-Dahla village in northeastern Deir Ezzor.

Scores of other civilians have fallen victim to Daesh brutality, with reports of residents of villages of Deir Ezzor and other provinces where Daesh-IS spreads getting killed, mutilated, decapitated and crucified have been coming out frequently.

In another context, locals of al-Boulail village in the countryside of Deir Ezzor killed four terrorists of Daesh-IS gangs, amid rising popular resistance against the terrorist organization.

A local source Thursday said that some residents attacked a Daesh-IS den in al-Boulail, located in Mohassan area east of Deir Ezzor, leaving 4 of the terrorist organization’s gangsters killed.

The reporter quoted the source as saying that one of the killed criminals was of Tunisian nationality.

The locals’ attack came days after members of the popular resistance against Daesh-IS in the eastern region destroyed a car in al-Boulail village, killing all the terrorists aboard.

Five other Daesh-IS terrorists were killed as an explosive device attached to their car was detonated in al-Ashara city.

Yesterday, members of the popular resistance, which emerged in response to Daesh atrocities and criminal acts committed against the civilians, killed 24 mercenary terrorists in al-Mayadeen city, 45 km southeast of Deir Ezzor city.

The past few months witnessed the increase of the popular uprising in Deir Ezzor province against Daesh-ISIL terrorist organization where people of al-Sbeikhan, al-Dwair and al-Keshkieh attacked the terrorist gatherings following killing 9 citizens from al-Sha’itat tribe and al-Sbeikhan town and kidnapping a number of women from al-Sbeikhan and al-Dwair towns by the Daesh-IS terrorists.