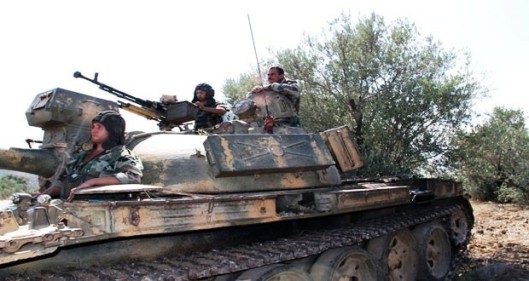 27/1/2015 ~ Units of the armed forces carried out operations against dens and gatherings of terrorists in several areas, inflicting heavy losses upon them in person and equipment.

Army strikes on terrorist dens near al-Burj al-Tebbi and the municipality building in Douma city led to the death of 15 terrorists and the destruction of a rocket launch pad, in addition to leaving 13 terrorists dead or injured near Omran establishment and near al-Saraya café in the city.

Terrorists’ social media pages acknowledged the death of several of their members in Douma, including Hasan al-Baali, Mufid al-Sheikh Najjar, and Ahmad al-Rihani.

In Hosh al-Fara farms east of Douma, the army eliminated a number of terrorists including Saud Nawwaf al-Dheimi from Saudi Arabia, Wasef al-Tahhan, Omar Dehniye, Khalil Bakkar, and Hatem al-Fawwal, in addition to preventing terrorists from sneaking towards Tal al-Sawwan farms, killing several of them in the process.

In Harasta’s northern farms, an army unit clashed with a terrorist group and killed most of its members, while another unit pursued terrorists in al-Bahariya farms in al-Nashabiye area, killing a number of them including Nasser Abdullah al-Khalaf from Jordan, Farouq al-Tawil, Hazem al-Khanshour, and Bilal Adam.

Another army unit destroyed a terrorist hideout in October 6 farms outside the town of Sa’sa.

Units of the army and armed forces killed and injured scores of terrorists in Sufohen, Basames, Kafer Shalaya, Kafer Lata, al-Rami, surrounding al-Araba’in mountain and Qaminas areas and destroyed a den with all terrorists inside it in Sermin in the countryside of Idleb Province.

Army units carried out a series of military operations against terrorist organizations’ positions and dens in the countryside of the Homs province, killing a large number of their members.

Army and armed forces units killed many terrorists and injured others in Kafar Laha, al-Tiba in al-Houla area and in Kherbet Hatoum south-west of Hassia in the countryside of Homs.

Other army units killed all members of an armed terrorist group who attacked residents of Mariamin and al -Sheniyeh villages in the western countryside of the province.

Terrorists’ dens in al-Musheirfeh al-Janoubiyeh and in the west of Mas’adeh villages were also targeted by the army in an operation that resulted in the death of many terrorists, while others were left wounded.

Meanwhile, the takfiri terrorist organizations, on their social media pages, acknowledged the death of a number of their members, including Abdul-Razzaq Mansour, leader of the so-called “Khalid Bin al- Walid brigade” and Ibrahim Mahmoud Suleiman in Talbiseh and al-Tibeh al-Gharbiyeh areas.

26/1/2015 ~ The army continued stepped-up operations against positions of terrorist organizations all across the countries, inflicting severe losses upon their ranks in personnel, while many of the targeted terrorists’ vehicles and weaponry are destroyed.

Units of the army and armed forces, aided by popular defense groups, killed large number of terrorists and injured many others in Ghajar Amir village, on Ghajar Amir-Keisin road and towards Jabbourin-Um Sharshouh road in the northern countryside of the central province of Homs.

Units of the army destroyed hideouts and gatherings of terrorist organizations east of Khan Sheikhoun and in M’arshoureen, Qminas, Eblin, al-Rami, the area surrounding al-Arbaeen Mountain, Kfar Lata, and Nahleh in Idleb province.

In Bzabour village in the eastern side of Jabal al-Zawiyeh Mountain, the army continued its operations against terrorists of the “Suqour al-Sham Brigade” terrorist group, inflicting heavy losses in personnel and equipment upon them.

Meanwhile, army units killed many terrorists and injured others in the villages of Al-Tiybat, al-Arnabeh and al-Shaghar in Jisr al-Shughour area in the western countryside of the province.

Other units of the armed forces razed terrorists’ hideouts and gathering in al-Akrad Mountain.

Units of Army and Armed Forces continued chasing terrorists of the Islamic State in Iraq and Syria (ISIS) terrorist organizations, targeting their gatherings and hideouts in Deir Ezzor countryside.

A military source told SANA that Units of Army and Armed Forces killed many ISIS terrorists, injured others, and destroyed their vehicles and weapons in al-Mohasan, al-Bo Leil, and Tabit Shamia east of Deir Ezzor.

The source added that the army established full control on al-Mre’yeh region in Deir Ezzor, killing scores of ISIS terrorists and confiscates their weapons and munitions.

Another Army unit carried out operations against terrorist gatherings in al-Tabni town and al-Khrita village 50 km from Deir Ezzor, destroying a number of terrorists’ dens, eliminating the terrorists inside them, and destroying their ammo and weaponry.

A large number of terrorists were killed and others were injured in al-Bo Omar village east of Deir Ezzor city and the town of Ayyash on the banks of the Euphrates River.

In al-Mayadeen area, 45 km from Deir Ezzor city, units of Army Destroyed terrorists’ hideouts and gatherings, killing many of them, injuring others, and destroying their weapons and ammunition.

In Daraa, a military source said army units destroyed several vehicles, some equipped with heavy machineguns, and killed many terrorists in al-Dali, al-Faqi’a and Koum al-Wawiyat in the province’s countryside.

NOTE: The contents of the articles, speeches or comments on this page are of sole responsibility of their authors. The team and the editorial staff of SyrianFreePress.NETwork do not necessarily subscribe every point of view expressed and are not responsible for any inaccurate, incorrect or offensive statement in this article. Any complaints and corrections (verifiable) will be accepted and welcomed. Copyright owners can notify their claims to us, and the verified contents will be removed.