This post is part of a series of complaints against some perfidious ‘press’ and ‘media outlets’ that disseminate false informations, or distorted informations or aimed at creating in the public opinion misconceptions, misleading from reality.

Here’s another example of interview, and positive availability by President Bashar al-Assad, turned into ‘propaganda’ of war.

Insults, defamation, disinformation, is the practice of the propaganda, not of journalism, because instead of going into the merits of the arguments, it is limited to denigrate without really explain the real reasons, because otherwise everything would collapse.

This is a bad example of ‘ethical journalism’, because instead of providing correct information and evidence to endorse what is proposed to the public, are created combinations of images/ideas to encourage the public to think about things that were not always in reality explicitly said. This is one of the most regrettable mistakes, that any serious journalist learns not to do from the first years of  study, before they even start a journalistic career.

It is then to think that in reality who composed the offending article is not a real journalist, but a simple composer of ideas…suggested by others…

Everyone is free to read the crap written by the media propaganda (link below) and then draw his own conclusions: bombarding the public with news where are mixed lies and truth is the method used to brainwash the people into believing that it’s all true, even what it is not.

~ The Guardian view on Bashar al-Assad’s BBC interview: the lies of a tyrant ~ Editorial ~ 10/2/2015
at
http://www.theguardian.com/commentisfree/2015/feb/10/guardian-view-bashar-al-assad-bbc-interview-lies-tyrant

FULL TEXT & VIDEO OF THE INTERVIEW AT:

~President al-Assad to BBC News: “So, the first part of your question is about asking us to stop fulfilling our duty to defend our people against the terrorists?…We are defending civilians, and making dialogue”~

Watching Mr Assad smugly commenting in an almost casual way about this ongoing calamity sounded like an exercise in denial. There were no words of empathy for a population that his troops have massacred, leaving whole cities, including Homs and Aleppo, in a state of ruin reminiscent of such 20th-century horrors as Guernica or Dresden. Thousands, possibly tens of thousands, of Syrians have been detained and tortured, some to death, in Mr Assad’s dungeons. Behind the slick images of an interview in a presidential palace, a whole country is being methodically and ruthlessly sacrificed to the interests of the Assad dynasty.

When the turmoil began in Syria, Mr Assad reacted by declaring that he would bring the whole Middle East to a state of chaos.

Mr Assad, supported by Iran and Russia, is allowed to portray himself as part of a common fight. He is, as ever, part of the problem, not the solution. 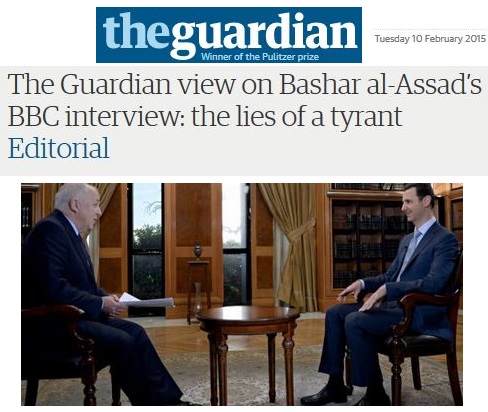 “Why Bashar al-Assad looks so relaxed”

1 thought on “PROPAGANDA ALERT: “The Guardian’s view on Bashar al-Assad after BBC’s interview: the lies of a tyrant”, (aka…The Guardian’s craps)”