UN Special Envoy on Syria Staffan de Mistura asserted that the political solution is only solution for the crisis in Syria, that President al-Assad is part of that solution and he will continue to hold discussions with him.

“I will continue to have very important discussions with him,” he added, noting that “the only solution is a political solution.”

If no solution to the conflict is found, “the only one who takes advantage of it is ISIL,” de Mistura said

De Mistura, who was in Damascus this week where he met with Assad, is due to deliver a report on his mission to the U.N. Security Council on February 17.

After his meeting with Austrian Foreign Affairs Minister Sebastian Kurz on Friday, de Mistura said that ISIS is the only side that benefits from the lack of a solution in Syria, describing ISIS as a monster that wants the conflict to continue so that it can exploit it.

De Mistura: “Syrians only would determine the form of rule in their country” 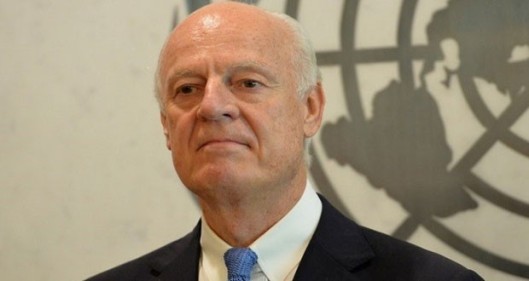 UN Special Envoy to Syria Staffan de Mistura affirmed that the Syrians only are the ones who determine the future of their president, the form of rule in the country and their destiny, calling for respecting Syrian national unity and sovereignty.

“The future of the Syrian government and the form of rule in the country are at the hands of Syrians only,” de Mistura told Sky News TV Wednesday, calling for seeking political solutions to the crisis in Syria.

On Wednesday Feb. 11th. President Bashar al-Assad discussed with de Mistura  in a positive and constructive manner the new details in de Mistura’s plan on freezing fighting in Aleppo.

President al-Assad, reiterated, then, Syria’s commitment to supporting any initiative or idea that helps to resolve the crisis and to preserve the lives of citizens and state establishments, while de Mistura voiced hope that all sides would cooperate and support his suggestion on restoring security to Aleppo, so that it may be a starting point to restore security and stability to the entirety of Syria.

He reaffirmed tot Sky News that the Syrian government has showed readiness to stop artillery and air bombardment in Aleppo for 6-weeks, adding “the opposition forces should also halt their military operations, particularly artillery and rocket shelling.”