(17/2/2015) ~ Units of the army and armed forces crushed Tuesday a number of terrorist organizations’ dens and hideouts, including for DAESH (ISIS), killing more of them.

Army units killed a number of terrorists and injured others in Mas’hara and Rasm al-Khawalid in the countryside of the southern province of Quneitra.

Units of the army and armed forces killed many terrorists and injured others in al-Latamina and Atshan in the countryside of the central province of Hama.

An army unit killed members of the Islamic State in Iraq and Syria (ISIS) terrorist organization while they were stealing oil in Palmyra countryside, a source in the central Homs province told SANA.

The source said a group of ISIS terrorists was stealing oil out of a pipe line in al-Dawarreh area, 20 km north of Palmyra in the countryside of Homs, when an army unit targeted it, killing all of the terrorists.

The operation came one day after an army unit repelled and foiled an attack which terrorists from ISIS organization launched on Ark gas field northeast of Palmyra.

Meanwhile, an army unit destroyed gatherings of ISIS terrorists, inflicting heavy losses upon them, in Jazal area, 50 km northwest of Palmyra, according to a military source.

The source told SANA that other army units carried out many operations against terrorists’ dens in Masaada, al-Msheirfeh al-Shamaliyeh, Rahoum and the area between Rahoum and Onq al-Hawa, killing many terrorists and injuring others.

Units of the army and armed forces killed a number of terrorists and destroyed the weapons and ammunition when targeting them in the villages of Khan al-Jouz, al-Wadi, al-Kiyala and Wadi al-Sheikhan in the northern countryside of Lattakia, a military source said.

The source also told SANA that another army unit carried out a special operation in which it targeted dens and gatherings of terrorists in Kinsabba village, 50 km north of Lattakia city.

The operation resulted in the killing of many terrorists, while others were left wounded.

Units of the army and armed forces killed a number of terrorists in Aqraba, kafer Nasej, Da’el and al-Mzairib in the countryside of the southern province of Daraa.

A military source said that army units directed blows to the terrorists’ gatherings in the villages of Aqraba and Kafar Nasij to the northeast of Daraa, inflicting heavy losses upon the terrorists.

On Attman-Dael-Tafas- al-Mzairib axis to the northeast of Daraa, army units intensified their fierce blows on the terrorists’ dens, killing many of them.

In al-Lajat area, an army unit destroyed a number of vehicles, leaving all the terrorists aboard killed.

Many terrorists were killed or injured after their gatherings were crunched in al-Kark al-Sharqi town to the east of Daraa city.

In Daraa al-Balad neighborhood, army units carried out intensive and accurate operations, where many terrorists were killed according to the source. It added that the military operations in al-Nazeheen Camp and al-Manshia neighborhood are continued, eliminating many terrorists.

The terrorist organizations, on their social networking websites, admitted the death of many terrorists including Abdu al-Maf’alani in al-Sheikh Meskin.

Units of the army and armed forces on  targeted terrorists ‘dens and hideouts in Abu al-Dohour area in Idleb countryside, killing all terrorists inside and destroying all weapons and ammunition hidden in.

A military source told SANA that army units targeted dens and gatherings of terrorist organizations in al-Hamidia, Tal Salom, Um Jrein and to the east of Abu al-Dohour in Idleb countryside

Earlier, army units inflicted heavy losses upon terrorists in the countryside of the province, whereas residents of Jabal al-Dweila clashed with terrorists linked to Jabhat al-Nusra after demonstrations against the atrocities committed by the terrorists.

A source at the province told SANA that many ISIS terrorists were killed or injured when an army unit targeted their gatherings in Mafraq al-Seddiq village, 40 km to the west of Hasaka city.

The source added that army units inflicted heavy losses upon ISIS terrorists in al-Haouz and Tal Majdel villages, where many terrorists were killed or injured. 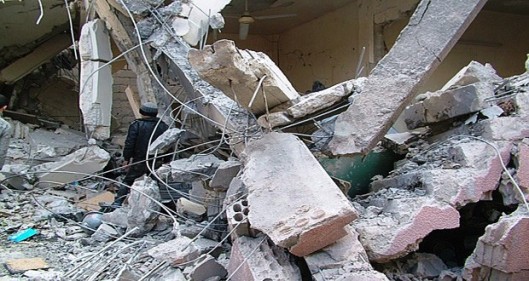 Terrorist shelling attacks kill 5, injure 20 others in Aleppo and Daraa

(17/2/2015) ~ Five civilians were killed and 15 others were wounded, two critically, in terrorist rocket and mortar shells fired on residential neighborhoods in Aleppo on Tuesday, SANA reporter quoted a source at Aleppo Police Command as saying.

The source added that terrorists fired rocket shells on al-Mogambo, al-Aziziyeh and Tishreen street neighborhoods in Aleppo city from Bani Zaid and Bustan al-Basha neighborhoods where terrorists backed by Erdogan’s regime are positioning.

The injured were admitted to al-Razi and al-Jamiaa (university) hospitals.

The terrorist attack also resulted in material damage to a number of houses, shops and cars.

On Monday, nine civilians, including three children, were killed and 20 others were wounded when terrorists fired rocket shells on al-Serian neighborhood in Aleppo city.

In the same context, four civilians were injured in terrorist shelling attacks on residential neighborhoods in Daraa city, southern Syria, on Tuesday.

Terrorists stationed in al-Naziheen Camp neighborhood in Daraa city targeted Shamal al-Khatt and al-Matar neighborhoods with ten shells fired from a locally-made cannon known as “Jahanam” (Arabic for hell), a source in the province told SANA.

SANA reporter said two other Jahanam cannon shells which did not explode caused material damage to an electricity transmission station.

Last January, five children were killed due to terrorist rocket attacks which hit their school in Busra al-Sham in Daraa countryside.