NATO’s 2011 intervention created the devastation and chaos in Libya that enabled the rise of Islamic State militants and the current crisis surrounding the killing of 21 Egyptian Christians, an American scholar told RT.

The current situation is “precisely the consequence of the kind of war NATO waged in Libya, destroying the infrastructure, collapsing the state, and allowing a bunch of different militia groups to be treated as heroes,” said Vijay Prashad, a professor at Trinity College in Connecticut, and the author of “Arab Spring, Libyan Winter.”

According to Prashad, the intervention “created the situation where today there are two governments. And in that chaos, of course, what breeds most effectively is this group that calls itself the Islamic State.”

Following a February 2011 rebellion in eastern Libya, and a crackdown by the government, the United Nations adopted Resolution 1973, authorizing a no-fly zone in the country. NATO later expanded its operations to include direct air support to rebels, resulting in the overthrow of Muammar Gaddafi’s government in October 2011.

“The question of impunity has to be on the table,” Prashad said, noting that NATO’s lawyers responded to a UN request to have the intervention audited, as per UN rules, with a note saying that “NATO does not conduct human rights violations.”

“The level of impunity is quite egregious,” Prashad concluded.

In the same way that the rise of the Islamic State in Iraq prompted calls for another US invasion, now the former head ofBritish intelligence has started calling for renewed Western engagement in Libya.

“After Gaddafi was ousted, no one held the ring to help manage a transition to something better, as the US, Britain and other allies had done in Baghdad and Kabul,” Sir John Sawers said in a speech at King’s College, London on Monday. “Libya had no institutions. Who or what would take over?”

A strong US military presence in Iraq did not prevent the rise of the Islamic State, however, and the Taliban continue to reclaim Afghanistan from the Western-backed government.

“During the Syrian crisis, Libyan fighters were funneled from various parts of Eastern Libya, into Turkey, to cross the border into Syria and join the fight against the Assad government,” Prashad said. “There has been, with the complete connivance of Western intelligence, Gulf Arab intelligence, further radicalization of the youth from eastern Libya, and now this is plainly blowback.”

Some 200,000 Egyptian nationals are working in Libya, mostly in the oil industry. Prashad criticized the fact that instead of evacuating their nationals, the Egyptian government decided to send three jets to bomb Derna.

“I’m afraid nobody in the West understands the politics of North Africa,” he said. “There is no way that aerial bombardment, either by the Egyptians or by the West, is going to solve this problem. It is naïve to believe that.” 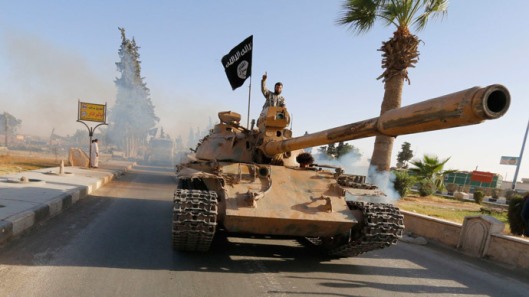 ISIS’ plans to conquer Europe via Libya have been revealed in letters seen by an anti-terrorism group. Owing to its perfect location on the continental doorstep, the terrorists plan to ferry fighters from North Africa across the Mediterranean.

The plans, analyzed by anti-terrorism British think tank Quillum, outline a strategy to illegally ferry fighters across the sea from Libya into southern Europe, into ports such as Italy’s southernmost island of Lampedusa, less than 300 miles (483km) away.

Libya “has a long coast and looks upon the southern Crusader states, which can be reached with ease by even a rudimentary boat,” an Islamic State (IS, formerly ISIS/ISIL) propagandist says in the letters seen by Quillum, according to the Telegraph.

That information originates from an IS supporter using the moniker Abu Ibrahim al-Libim. The propagandist is believed to be a strong force in IS recruitment online, with a focus on Libya.

The Telegraph could not independently confirm his identity, but the online recruiter is believed by analysts to be a great inspirer of troops and is widely-read.

“Twitter has shut down Libim’s accounts several times and each time he starts a new one he gets thousands of followers very quickly, which is typical of an influential [IS] affiliate,” Charlie Winter, researcher for the Quillam Foundation, told the newspaper.

The plans Libim reveals revolve around posing as illegal immigrants, to then start an all-out attack on southern Europe by seeding chaos and bloodshed. The terrorists reportedly hope to flood Libya with other fighters from Syria and Iraq, with a whole army at the ready to invade.

“We will conquer Rome, by Allah’s permission,” he says in a Sunday video depicting the beheading of 21 Egyptian Christian guest workers, the video that led to Egypt organizing a bombing campaign on militant positions in Libya. He also describes the country as having “immense potential” for the terrorist group, while making references to the spoils of war left after the ouster of Colonel Muammar Gaddafi in 2011 – tons of weapons, ammunition and oil.

Libim continues to explain how illegal immigration across into Italy is “huge in number” and that “if this was even partially exploited and developed strategically, pandemonium could be wrought in the southern European states and it is even possible that there could be a closure of shipping lines and targeting of Crusader ships and tankers.”

The video and the letters come shortly after renewed calls in the West to do something about Libya’s security problem. President Obama’s strategy, for one, depended heavily on a president forced to step down recently. Now, the country’s security is at an all-time low, and the various factions and jihadist groups vying for control of the oil-rich state have plans to remake Europe in that image.

And owing to Libya’s vast desert swaths and porous borders with sub-Saharan Africa, the country has long been a firm favorite for trafficking people into Europe.

However, after the fall of Gaddafi in 2011, Libya’s status as a terrorist hub shot through the roof and, according to the documents, this could be a perfect country for an all-out incursion into southern Europe.

Security bells are ringing, especially in Italy, which saw 2,164 illegal migrants rescued in the space of 24 hours over the weekend. It could now be faced with many that are terrorists, according to Egyptian Ambassador to London Nasser Kamel. “Those boat people who go for immigration purposes and try to cross the Mediterranean … in the next few weeks, if we do not act together, they will be boats full of terrorists also.”

Just as these assessments came to light, Italy issued its own statement, outlining just how great a risk there is of Libyan militants merging with the IS. On Wednesday its Foreign Minister Paolo Gentiloni spoke of an “evident risk” and that time for Libya was “running out”. He called for “a change of pace” from the international community. 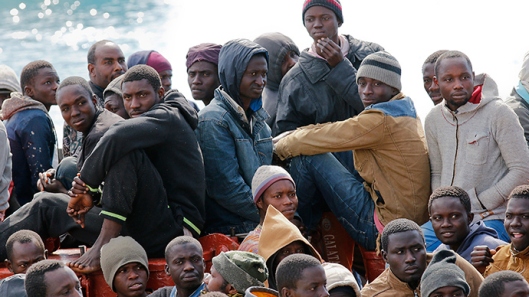 IS leader Abu Bakr al-Baghdadi has openly been claiming Libya for his ‘caliphate’ recently.

While still not completely submerged, the country is fast on its way, as whole cities conquered by the group now adhere to its strict form of Islam, complete with executions.

Navigating Libya’s terrorist circles is also a daunting task: some are allied with the IS, others with Al-Qaeda. All are fiercely anti-government, though some have helped install a new government in Tripoli, after banishing the internationally-recognized one to Tobruk in the east.

“In terms of the demographics of [IS] support in Libya, we see a lot in common with its base of support in Iraq and Syria – many of its fighters are young, disfranchised men who have only bought into ISIL’s brand of Islamist zealotry because they are looking to forcibly empower themselves in the penetrating absence of the state,” Winter explains.

“The risks Europe faces from ISIL pre-eminence in Libya are substantial.”

The onus would appear to be on the West to do something security-wise – especially in places like Italy. But that country is already facing a fierce backlash from UN’s refugee agency, the UNHCR, for seemingly caring more about implementing stringent security policies on immigrants, as opposed to caring for people’s safety when they drown just off the coast trying to make it to a better life.

More than 207,000 people have attempted the crossing to Europe over the Mediterranean Sea this year – “almost three times the previous known high of about 70,000 in 2011,” the UN pointed out. That year saw a spike on account of the Libyan civil wa.