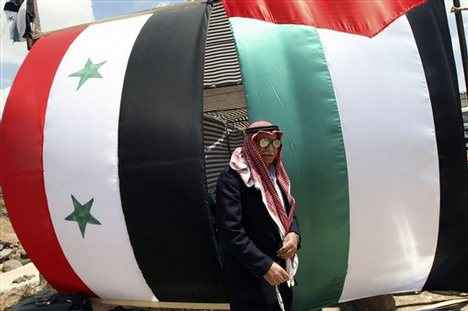 Damascus, SANA/Qabas/ H. Said – The Palestine Liberation Organization (PLO) said any decision about the terrorists-besieged Yarmouk Camp neighborhood will be coordinated with the Syrian government.

Terrorists, mostly from the Islamic State in Iraq and Syria (ISIS), in cahoots with Jabhat al-Nusra, entered the neighborhood recently and have been committing terror acts against its inhabitants, which include Palestinian refugees and Syrian citizens.

Any future steps to be taken in Yarmouk Camp will be coordinated between Syria and the Palestinians, Member of the PLO Executive Committee Ahmed Majdalani told a press conference on Thursday.

“The decision will be jointly made by the two sides to retake the camp from the obscurantist terrorists who seize it now,” added Majdalani, who is on a visit to Syria.

He stressed that the Syrian leadership has been dealing with the situation in the neighborhood, which is located in southern Damascus city, with a high level of sensitivity given its special status as it symbolically stands as “the capital of Palestinian Diaspora” in terms of its size, the population and the national and historical role it has played for the launch of “the Palestinian revolution of today.”

Stemming from this sensetivity, Majdalani said, there has not been “any Syrian security solution” in order not to look as if there is a Syrian attitude to liquidate the Palestinian cause, said Majdalani.

Speaking about the options for the coming period, Majdalani said former options of reaching a political solution were aborted by the terrorists and their criminal acts of killing, kidnapping and rape against civilians.

This, he said, “leaves us with other options of going for a security solution that takes into consideration the partnership with the Syrian state in view of its sovereignty over its territories.”

He made it clear that the issue is first and foremost in the Syrian state’s hands in terms of preserving the security and stability of the Palestinians and Syrians alike.

About the results of calls made with the Syrian government and Palestinian factions regarding the arising situation, Majdalani said it has been agreed with the Ministry of Social Affairs to secure the requirements of “safe evacuation” for residents who want to leave Yarmouk Camp.

Makeshift residential centers will be secured for those in Qudssaya area, along with garnering the necessary humanitarian and relief support, in addition to the support provided by the Syrian government, he added.

Majdalani gave figures of the evacuation cases from the terrorism-afflicted neighborhood, putting the number of those who have been given a way out at nearly 2000 out of the 17,500 residents who were in the neighborhood before ISIS entered it.

The evacuees, he said, included 12000 Palestinians, noting that the evacuation was carried out in cooperation with the Syrian government.

Over the past two days, Majdalani met with a number of officials and stressed that implicating the Palestinian refugee camps in the current events in Syria is aimed at attempting to liquidate the Palestinian issue and ending the refugees’ right to return home.

2 thoughts on “Palestine Liberation Organization (PLO): “Syrian leadership deals with Yarmouk Camp with sensitivity, any decision will be jointly made””