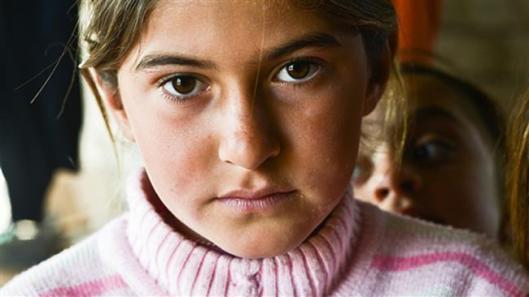 The file photo shows a displaced Izadi girl living in an unfinished building outside the town of Dohuk, in Iraq’s Kuridistan region.

Izadi (Yazidi) women (11) and girls (9), released statements after they escaped from the Daesh’s captivity, in the northern town of Dohuk, in Iraq’s Kurdistan region, in January and February 2015.

In August, 2014, the ISIL (ISIS-DAESH) terrorist gangs took several thousand Izadi civilians into custody in the northern Iraqi province of Nineveh, separated the girls and women from their families, and transferred them to different strongholds of the terrorist group in Iraq and neighboring Syria.

DAESH is holding the Izadi captives in multiple locations across northern Iraq, including Mosul, Tal Afar, Tal Banat, Ba’aj, Rambusi, and Sinjar, and in areas it controls in eastern Syria, including Raqqa and Rabi’a.

She further said that seven Daesh militants “owned” her, adding, “Sometimes I was sold. Sometimes I was given as a gift. The last man was the most abusive; he used to tie my hands and legs.”

“I told him not to touch me and begged him to let me go,” Jalila said, adding, “I told him to take me to my mother. I was a young girl, and I asked him, ‘What do you want from me?’ He spent three days having sex with me.”

Wafa, another 12-year-old Izadi girl, has been abducted with her family and taken to a school in Tal Afar where the Daesh militants separated her from her family. Wafa further said that she was later taken to Raqqa, in Syria, where an old Daesh militant selected her.

“He was sleeping in the same place with me and told me not be afraid because I was like his daughter,” she said, adding, “One day I woke up and my legs were covered in blood.”

Dilara, a 20-old Izadi girl, said that Daesh militants took her to a wedding hall in Syria where they told her and as many as 60 other Izadi female captives to “forget about your relatives, from now on you will marry us, bear our children.”

“From 9:30 in the morning, men would come to buy girls to rape them. I saw in front of my eyes ISIS (Daesh-ISIL) soldiers pulling hair, beating girls, and slamming the heads of anyone who resisted. They were like animals…. Once they took the girls out, they would rape them and bring them back to exchange for new girls. The girls’ ages ranged from 8 to 30 years… only 20 girls remained in the end,” Dilara explained.

Nadia, a 23-year-old Izadi female, said that she was abducted in a village near Sinjar, in Nineveh Province, in August, 2014, and was taken to Syria, where one of the Takfiri militants, identified as Abu Du’ad, said that he would marry her.

“The other girls with me said it’s forbidden to marry married women,” Nadia said, adding, “He replied, ‘But not if they are Yezidi (Izadi) women.’”

Nadia said she refused to marry and her brother in Germany whom Abu Du’ad called to get permission for the marriage “said no to the marriage and offered to pay $50,000 for my release but Abu Du’ad said no.”

Leila, a 25-year old Izadi girl, explained that she tried to kill herself in order to avoid rape, but her attempt failed.

“I went into the bathroom, turned on the water, stood on a chair to take the wire connecting the light to electrocute myself, but there was no electricity. After they realized what I was doing, they beat me with a long piece of wood and with their fists. My eyes were swollen shut and my arms turned blue. They handcuffed me to the sink, and cut my clothes with a knife and washed me. They took me out of the bathroom, brought in [my friend] and raped her in the room in front of me,” she explained.

According to the International Organization of Migration, in excess of 736,000 Iraqis, mainly Izadis along with other religious minorities, have fled their homes in Nineveh to Iraq’s Kurdistan region since the Takfiri group launched its attacks in and around Sinjar on August 3, 2014.

According to Iraqi Kurdish security sources, some 216 Izadis were freed near Iraq’s northern city of Kirkuk and were received by Kurdish Peshmerga forces on April 8.

The fate of many Izadis abducted by the Takfiri group is still unknown.

According to a report by the Office of the United Nations High Commissioner for Human Rights on March 13, 2015, approximately 3,000 people, mainly Izidis, remain in the terrorist group’s captivity.